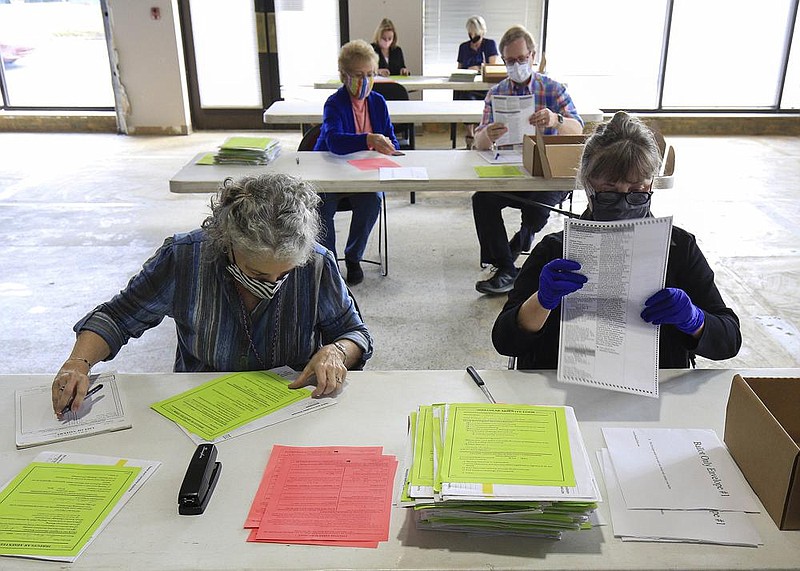 The Pulaski County Election Commission on Monday voted to certify the results of the Nov. 3 general election -- minus one state House race where the margin is fewer than 25 votes -- after a lengthy meeting that included news of a lawsuit, the discovery of a box of ballots and an attempt to oust the county's director of elections.

The only race to remain uncertified is the battle in House District 32 between state Rep. Jim Sorvillo, R-Little Rock, and his Democratic challenger, Ashley Hudson.

Hudson moved narrowly ahead of Sorvillo in the vote count early Saturday.

The commission on Monday agreed to count six of the final nine remaining ballots, while rejecting three. Three of those counted ballots were cast in House District 32, breaking 2-to-1 for Sorvillo.

The complete, unofficial results in House District 32 were:

The results in that race have been called into question, however, after election workers revealed last week that they had mistakenly fed 327 disqualified ballots into vote-counting machines, irreparably mixing the invalid ballots in with valid ones. Staff members determined that 32 of the ballots were cast in District 32, more than the margin of votes separating the candidates.

Sorvillo could not be reached for comment Monday, and a copy of his lawsuit was unavailable on the circuit court's website. A.J. Kelley, Sorvillo's attorney, declined to comment.

The commission nonetheless agreed to delay certification of the race until Wednesday, the final day for certification, after consulting with the secretary of state's office.

After the meeting, Hudson called the commission's decision "wrong-headed," noting that the commissioners certified the results in another race -- in House District 38 -- where there were more disqualified ballots counted than the margin between the two candidates.

"The commission has decided to cherry-pick my race when I happen to be ahead," Hudson said Monday. "In North Little Rock, the Republican is ahead but I noticed that they didn't try to de-certify that race even though the vote is closer than mine."

"If people weren't already suspecting this election is completely tainted, I promise you they do right now," Commission Chairwoman Evelyn Gomez said.

The lone Democrat on the commission, Joshua Price, successfully pleaded with his fellow commissioners to review the ballots to see if they were valid.

The commissioners found the box had been mislabeled: all of the ballots inside had errors that had not been cured, rendering them uncountable.

Hudson said there had "absolutely" been mistakes made in the vote-counting process, but echoed the concerns of one poll worker who said the commission had not given staff enough time to count the unprecedented number of absentee ballots.

Near the end of the meeting, Gomez moved to decertify Poe from election work -- essentially stripping him of his duties -- though the other two commissioners, Price and Republican Kristi Stahr, expressed concerns about doing so ahead of runoff elections scheduled for Dec. 1.

The commissioners agreed to allow Poe to continue as election director, provided that he give the commissioners greater access to documents and allow cameras in the vote tabulation room.