Pittman: Hogs have 'adequate' number of players for LSU game 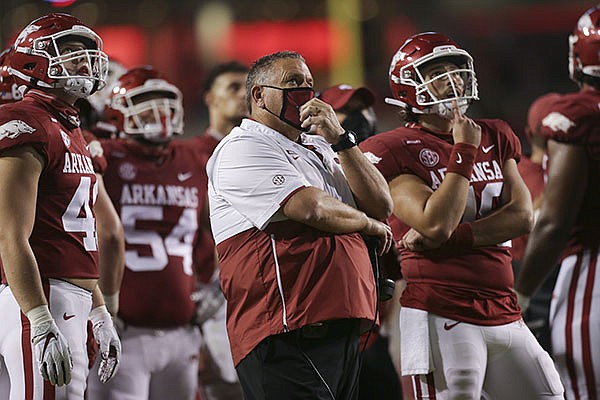 Arkansas football coach Sam Pittman (center) and players watch a replay during a game against Tennessee on Saturday, Nov. 7, 2020, in Fayetteville. ( Charlie Kaijo)

But Pittman said Arkansas still has "an adequate number of people to play" Saturday's scheduled game against LSU. The game is scheduled to kick off at 11 a.m. at Reynolds Razorback Stadium.

"We've had some positives this week that certainly will affect our football team," Pittman said, "but per numbers mandated by the SEC, we are still within that number ratio, so we're looking forward to playing."

Arkansas' coaches and players have gone through two rounds of covid-19 testing this week and have another test scheduled for Thursday. The results of that test will be known to the team by Friday morning.

Pittman did not disclose who has tested positive or if others have been quarantined due to contact tracing. More than positive covid-19 cases, the SEC's contact tracing protocols have been viewed as the primary reason for several SEC games being postponed this season.

"Candidly, the numbers around contact tracing...have emerged as one of our biggest challenges to playing," SEC commissioner Greg Sankey said last week after the conference postponed four games.

"We don't control those policies. We don't dictate those policies. Those policies exist in the public health domain. Over time, our test positivity rate is incredibly low among our student-athletes, something like .005 percent. Even this week the positive test numbers, even where they've risen, are relatively small. But the contact tracing has the potential to magnify even one positive test."

Arkansas (3-4) has not had an interruption to its schedule this year. LSU (2-3) has had two games postponed, including one scheduled for last week against No. 1 Alabama.

Pittman, who tested positive for coronavirus during routine testing Nov. 8, returned to the Razorbacks' football center Wednesday. He worked from home the past nine days and was not allowed to travel for Arkansas' 63-35 loss at No. 6 Florida last Saturday.