High water or not, lights to go on 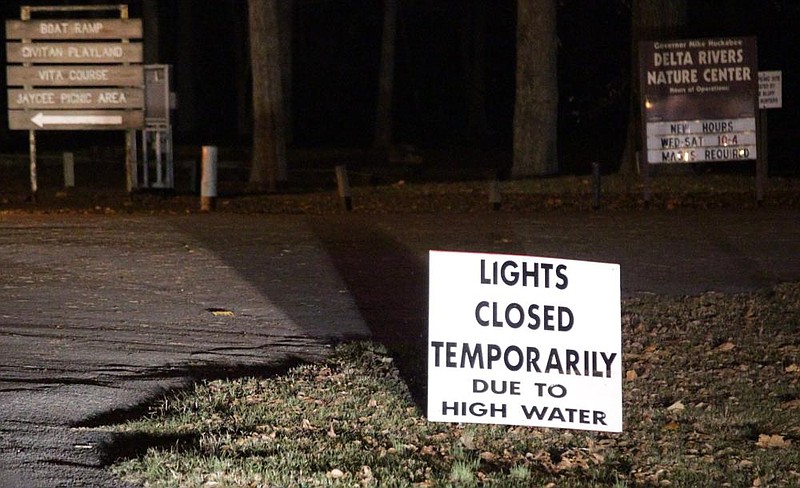 Visitors to Regional Park Tuesday night looking for Christmas lights were greeted by a sign notifying visitors that, due to high water, the Christmas light display by the Arkansas river was closed. It was not immediately known when the display may be opened back to the public. (Pine Bluff Commercial/Dale Ellis) ( Dale Ellis / Dale Ellis)

In the past several days, Pine Bluff residents have eagerly awaited the sight of Christmas lights on a drive-thru route in Regional Park, but all this week, the lights have been dark.

A sign at the entrance of the park said the lighting display was closed because of high water, but the high water that has affected the lights this year seems to be related to last year's flooding, according to one city official.

Kerry Battles, executive director of the Pine Bluff Festival Association, the nonprofit that handles the Christmas light show, said flooding last year wound up creating problems this year for the city as it has worked to get the riverfront lighting display up and running.

"That sign due to high water, that was just the sign we had to put out at the time," Battles said, "for the simple fact that we didn't have anything else and we wanted the public to know that the park was closed."

Battles said that historic flooding last year that affected all counties along the Arkansas River had damaged electrical boxes alongside the river, but that damage had not been detected at the time. He said Entergy Arkansas was contacted to repair the damage, which should be completed by the weekend.

"That's what the problem is and why we weren't able to open on time," Battles said Thursday afternoon. "I'm actually waiting on Entergy to get out there now in hopes of this being alleviated and being able to open this display tonight."

Battles said that even though the sign was placed there because no other signs were available, the message conveyed was not wholly inaccurate.

"In one case it is due to high water, but it's not high water at the park at this time," he said.

This is the 24th year that the holiday light show has been in existence, and it is said to be the state's largest drive-through exhibits. The 1.3 miles of displays includes 240 separate pieces, from large corporate-sponsored displays to small ones sponsored by individuals in honor or in memory of a loved one.

In a typical year, tens of thousands of visitors go through Pine Bluff/Jefferson County Regional Park to view the light show, but with the coronavirus pandemic, the numbers could be less this year, Battles has said.