Gene King has had myriad experiences in his 93 years — he is a rare bird to have fought in three wars — and he spent his working life as a coach and a principal, inspiring countless high-school November 22, 2020 at 9:02 a.m. 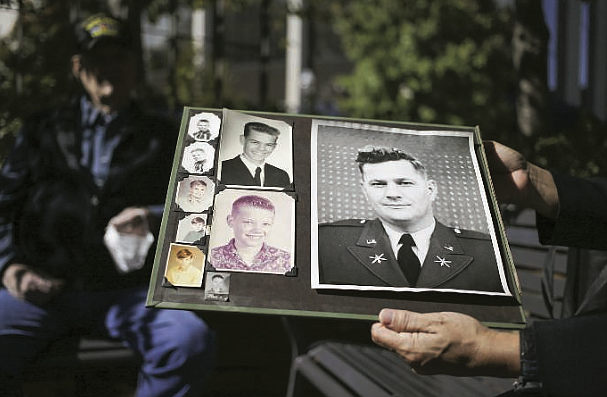 Old photos of King show a dashing young serviceman who joined the Coast Guard when he was just 16. (NWA Democrat-Gazette/Charlie Kaijo)

Albert Eugene "Gene" King has a framed collection of medals from his service in the military -- among them a Purple Heart, awarded for being wounded at the hands of the enemy, and a Bronze Star, awarded for meritorious service in a combat zone.

What makes that collection of medals remarkable is they span three wars. King served in World War II, the Korean War and did two tours in Vietnam. During World War II, he was grazed by a bullet as he crawled along the beach trying to get a wounded soldier back to the troop transport ship on which they served, resulting in the Purple Heart.

But he doesn't especially want to talk about any of that. He doesn't see his service as extraordinary. For that matter, he doesn't see his life as extraordinary, even though he is 93 years old, looks and moves like he might be 65 and remembers everything. His first story about the military is that he coached a football team in Germany that was 13-0. Asked what he'd want to be remembered as, his immediate answer is "a daddy, a husband and a coach."

King met Danny Russell, the friend who so adamantly wanted his story told, when they were both coaching in Mayflower around 1976.

"He had come to Mayflower High School that year as the football coach, and I had been out of coaching a while and took the basketball coaching position," Russell remembers. "We immediately became good friends. He loved to share stories about his life, but mostly, he talked about athletics and music. Due to his humility, I actually didn't know he had been in three wars until a few years later. We both shared a love for teaching our students and a love for music. We mostly talked about that and our families."

King was born July 26, 1927, in Springdale and raised in Huntsville by his parents, William Albert King and Maggie Jane Reed King. He had two older sisters, one younger sister -- and two pairs of pants. One pair was "Sunday go-to-meeting" pants; the other, he wore every day to school, where he played tackle football at recess. Every night, he washed those pants and hung them behind the stove to dry so he could wear them the next day -- and his mama fixed them when they needed it. He remembers plowing behind the mule and bailing hay for 25 cents a day.

King's father was an administrator in the Huntsville school system before becoming Madison County treasurer. He was also a tough task master where his son was concerned. King admits quietly that he often got the blame for things he didn't do and when he was 16, he ran away from home to escape from it. He joined a traveling carnival that was passing through town, he remembers, and on the way out, he says he changed the Huntsville population sign from 522 to 521.

King finally made his way to San Bernardino, Calif., where one of his older sisters lived, and then moved on to live with an uncle near Bakersfield. He started trying to join the service, but each time a recruiter called his father -- collect -- for permission, the elder King said no. When the Coast Guard called in 1944, King's dad finally said yes -- mostly, King thinks, to stop getting the collect calls. They stretched the truth just a little and said he was 17. He says he almost was.

"During wartime, if you were 17 and enlisted just before your senior year in high school, they allowed you to receive your high school diploma," King remembers. He did, and they did.

King was sent to basic training in New York, then to Philadelphia, then to the Coast Guard Academy in New London, Conn., then gunnery school in California. He was then shipped out to the South Pacific. His mission in World War II was aboard the ship General C.H. Muir AP 142, a troop transport, on which he visited the Marshall Islands, Mariana Islands and the Philippines. According to Russell's recounting of the story, King was scheduled to go to Japan for the invasion, but the bombs were dropped on Hiroshima and Nagasaki, and he was not sent. Instead, King's ship was the first to take troops from the Pacific to the East Coast on Aug. 14, 1945, after Japan surrendered.

Settling in Newark, N.J., King lived the life of a dashing young soldier. He talks about going with a friend to the skating rink to meet girls -- but giving the girls fake names in case they didn't want to see them again. One night, King went to meet the girl he'd been dating, who had promised to show up if she got back from a wedding in Pennsylvania in time. She didn't -- and King instead skated with Gloria Ann Lux. Asked if it was love at first sight, he smiles. "It was for her," he says. "I know that."

The couple married on July 10, 1946, and King went to work for the public transportation service in Newark, sweeping buses at night. He later became chief clerk and got a day job -- at the impressive sum of $75 a week. But he still dreamed of becoming a football coach, and in 1948, they returned to Arkansas, where he enrolled at the University of Arkansas to begin his undergraduate degree. He did play football as a Razorback -- briefly -- walking on as a punter. A hip injury cut his Hog time short, but he still roots for every Razorbacks football, basketball, baseball and softball team.

When the Korean War started, King, still serving in the Coast Guard Reserves, was called back to active duty but instead chose to enlist in the Army in 1952. He was sent to Fort Riley, Kan., for basic training, then on to Fort Bliss, Texas, for Officer Candidate School. He was trained in anti-aircraft artillery and stationed at San Clemente Island Early Warning Station to protect against possible enemy air attacks.

King went to Korea in 1953 in the 45th Division as a second lieutenant and wound up on the front line. Again, it's not something he especially wants to discuss, saying simply, "There never was really an end to the Korean War. No one surrendered. Both sides just agreed to stop fighting."

It was after the war that King -- and his growing family -- served two hitches in Germany, one in Wiesbaden as battery executive officer and one in Stuttgart as special services officer. During that time, he coached football -- racking up that 13-0 record he's still proud of -- coached baseball and led a band called Gene King's Arkansas Drifters. That prompts King to talk about something else he loves besides college sports.

A friend at UA while King was a student there in the late 1940s was moving back home and gave him his collection of country-western records. As King remembers it, the boy's family only allowed classical music to be played at their house, and so he couldn't take his records with him. The collection that started with those 200 records now numbers more than 50,000.

What happened, King says, is that he discovered Columbia recordings all had numbers on them -- and he wanted to collect them all. Then he saw the same was true for RCA. And Decca. And thus it began.

Now, King -- who is a night owl -- spends his time cataloging those records into a listing on his computer. So, Russell says, if you want to find "Jailhouse Rock" by Elvis Presley, King can tell you it's on the fifth shelf of the numbered shelves that encircle his basement.

That's the same place that King and Russell sit down to jam whenever Russell visits from Little Rock. King says it's hard for him to play guitar these days, but he still enjoys making music with his friend.

King also served two tours in Vietnam, making him one of the rare veterans to have served in all three major wars of the 20th century. His son, Craig, also served, crossing paths with his father as the elder King was going into the country, King says. That war was King's final stint in the Army. He retired in 1970, moved his family back to Northwest Arkansas, got a job as assistant football coach at Huntsville High School and re-enrolled at the University of Arkansas to complete his undergraduate degree, which he received in 1974.

"It took me 25 years to finally get that degree," he says.

King was a principal at Winslow, head coach at Decatur, head coach at Mayflower, head coach at Elkins and completed his career in education as librarian at Winslow High School. He and Russell have remained friends ever since the mid-1970s and watching them interact, it's clear how close they are.

"I am in awe that he could have experienced all these things in his life," Russell says. "Obviously, one extraordinary thing about him is his stature and mental sharpness. He stands tall at 6-foot-3 and has a personality of a man truly caring about you. His attitude about life has allowed him to grow older without growing old. He has experiences and knowledge of what people did for our freedom younger people could definitely benefit from if they cared to seek it out."

After Gloria's death in 2010, King has remained in Fayetteville. He has a caregiver who checks on him daily; he reads everything he can lay hands on, including war stories, Westerns, "and right now, I'm reading a book on computers. I don't understand a lot of it, but I'm reading it!"

He also reads his Bible every day, follows the Dallas Cowboys and the Las Vegas Raiders -- in addition to the Razorbacks -- and says he never worries about the past or the future.

In the meantime, he says, "life goes on. Have fun. Be happy."

Russell says a perfect visit with the man he calls "Coach" is "just to sit down with him in his basement surrounded by memorabilia and listen. But you'd better have time to listen." And, he adds, "I think this story should be told for all the people who serve their country and the so very few three-war veterans left.

"He is an amazing man who loves life and his country," Russell concludes, "and I love him."