He convinced her he was single to become a couple 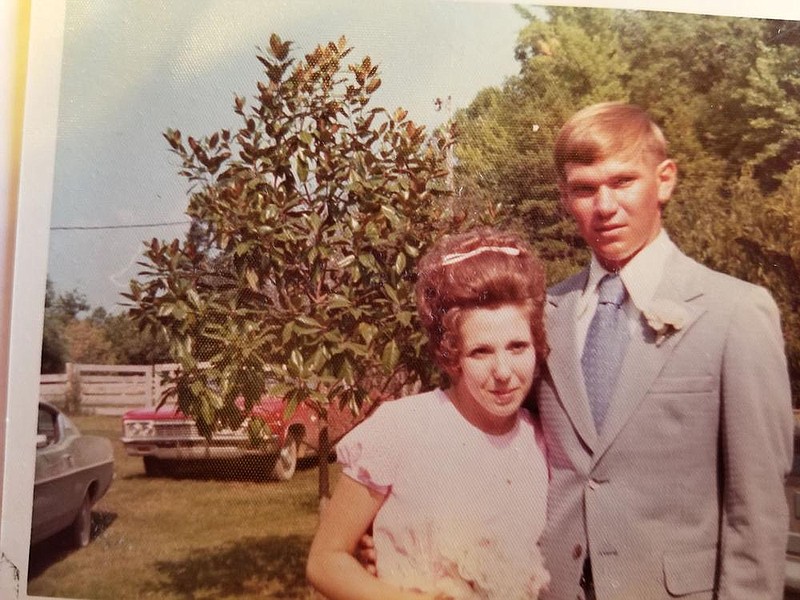 Patricia and Charles McLemore were married on Aug. 19, 1972, at the home of Patricia’s grandparents. Charles adored Patricia’s grandmother, whose name was True Love. “I tell people I was searching for True Love and I found her. She was married, but I fell for her granddaughter, Patricia Love,” Charles says. (Special to the Democrat-Gazette)

Charles McLemore showed Patricia Love his class ring in an attempt to prove he wasn't dating the girl who introduced them. His story, though, didn't ring true with her -- she wanted to hear it straight from her friend.

Patricia, a junior in high school, had recently moved to Mena from Michigan with her family when a friend introduced her to Charles, who was a grade ahead of them, in January 1969.

"I got her to pull over, and I asked her if she wanted to go get a Coke or something at the Dairy Queen," he says. "She said, 'Well, I better not.' She was acting kind of funny, and I asked her what was wrong."

Patricia explained that she thought he was going steady with the other girl, and, though he insisted he wasn't, he sensed her skepticism.

Charles had dated the girl who introduced them for about nine months. They had broken up but remained good friends. He had given the girl his senior ring to wear on a chain around her neck, and when they broke up she returned it. He offered the ring, back in his possession, as proof of his claim that he wasn't dating anyone -- but it wasn't quite enough.

"I ended up telling her to call the other girl and ask her," Charles says.

"I didn't want to start dating him until I talked to her. When I asked her and she said no, they weren't dating, I thought, well, I guess it's OK to go out with him," Patricia says.

The next time Charles saw Patricia downtown, he stopped her to talk and this time when he asked her out she was happy to say yes.

They went to the movies, probably to see something starring John Wayne.

"I ran the projector over there at the movie theater at Mena. I worked there on the weekends -- Friday night, Saturday matinee, Saturday night and Sunday. But I didn't work on school nights from the ninth grade through high school. And then when I went to college, I came home on the weekends and ran them," he says. "I could get into the show for free, so I asked her if she wanted to go to movies. She said sure. So that was a good cheap date."

They dated through the second half of Charles' senior year and through his freshman year of college at Henderson State College (now Henderson State University) in Arkadelphia. After she graduated, she joined him on campus.

Charles left for ROTC summer camp at Fort Riley, Kan., the summer between his junior and senior year of college, and when he got back he discovered that Patricia's family was planning to move out of state.

"She was going to have to move with them, and she was kind of upset. And I told her, 'You don't have to go. Why don't we just go ahead and get married?' We knew we were going to do it anyway," he says.

They exchanged their vows on Aug. 19, 1972, at the home of Patricia's grandparents. Her uncle, a Baptist preacher, officiated.

Charles was prepared to be sent to Vietnam with the U.S. Army but instead got a reserve commission as an artillery officer and left for Fort Sill, Okla.

When he was discharged they moved to North Little Rock, where they raised their two children -- Charles McLemore of Bryant and Julie McLemore of London, England.

Charles retired in 2006 as director of research at the Arkansas Department of Parks and Tourism. When Patricia retired from her job in administrative services for the Department of Human Services in January 2014, she began studying genealogy. Her brother gave her a notebook full of research his boss' wife had done for him and suggested she figure out if their roots could be traced back to Abraham Lincoln.

"It turns out we are related to Abraham Lincoln," she says.

Her proof of that lineage allowed her to join the Daughters of the American Revolution, as well as Arkansa, which is the Hot Springs Village chapter of the Daughters of the American Revolution, Arkansas Society of the Colonial Dames 17th Century, the Dames of Court of Honor and Guild of Colonial Artisans and Tradesmen, and other related organizations.

Charles discovered his relation to John McLemore, who fought in the American Revolution, and he joined the Sons of the American Revolution. He had an authentic officer's uniform constructed and Patricia sewed her own period dresses and they go to various re-enactments together. They enjoy visiting area schools in costume to talk about patriotism and history.

She and Charles now spend many of their days bouncing research ideas off each other as they trace their family histories.

After 48 years of marriage, they have developed some history of their own.

Charles gave the senior ring to Patricia not long after he had offered it up as proof of his single status.

"I don't remember when she gave it back to me," he says. "I guess it was after we got married."

She says: “I thought he was my friend’s boyfriend, and he was so sweet and so nice.”

He says: “I thought I ought to welcome her to the community.”

She says: “I was just thinking about how he was going to be in the service and I was going to be away from my family. I was kind of nervous, thinking, ‘What does the future hold? What’s going to happen next?’”

He says: “I was thinking I was glad I was getting into the Love family.”

She says: “You have to marry someone you can trust. If you don’t think you can trust them you shouldn’t marry them.”

He says: “You have to be able to talk to them, to talk over things.”