‘Mannequin and Wife’ author Jen Fawkes has lots of ‘imanginary friends’ for inspiration by Sean Clancy | November 22, 2020 at 3:03 a.m. 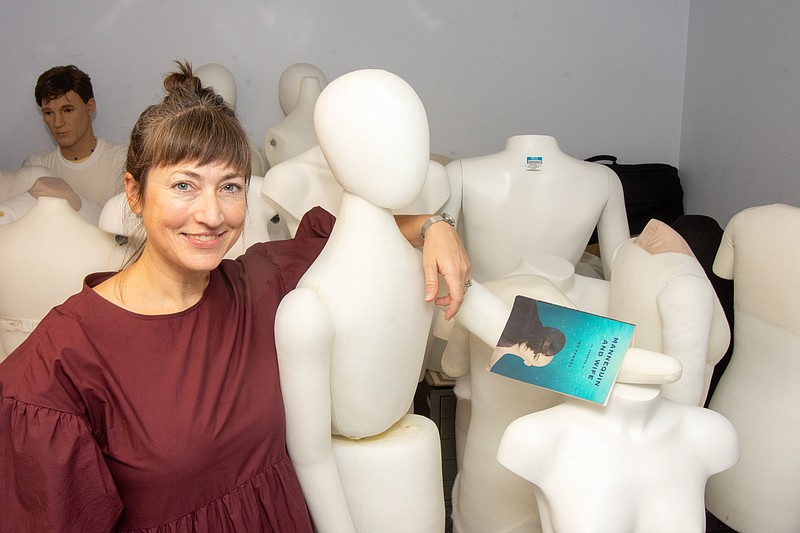 "Mannequin and Wife," the debut short story collection from Little Rock writer Jen Fawkes, can sometimes make a reader feel as if he or she has been dropped into an episode of "The Twilight Zone."

Fawkes' characters include a group of secretaries watching their bosses duel to the death; a hard-boiled detective who is hired to track down a mad scientist; the couple from the title story who take in a mannequin that has mysteriously appeared at their home; sentient pinatas being studied in a laboratory and a comatose young woman who has left her hospital bed after apparently transforming into a butterfly.

Her settings range from a roadside circus in Georgia and World War II-era London to a somewhat David Lynchian version of American suburbia and she slips in and out of genres with confidence. Fawkes is often funny and has a vivid way with description. Try getting this line — "Making love to the Elephant Girl was like going to bed with a belt sander" — out of your mind anytime soon.

In a book-cover blurb, Little Rock novelist Kevin Brockmeier astutely notes: "How fortunate for us that Fawkes has her eyes open wide, trained in just the right direction to see the things that no one else is seeing."

The 46-year-old Fawkes, who didn't start writing until she was 30, was born in Chicago and grew up in Little Rock after her parents' split (her mother is from St. Charles in Arkansas County). She graduated from Little Rock Central High School and attended Columbia University in New York. She has an MFA from Hollins University in Roanoke, Va., and a doctorate from the University of Cincinnati.

After years of moving around — she has lived in Asheville, N.C., Ithaca, N.Y., and Philadelphia, among other places — she returned to Little Rock in 2014 and is married to Bill Gatewood, director of the Old Statehouse Museum.

She is a four-time nominee for the Pushcart Prize and her stories have appeared in One Story, Crazyhorse, Best Small Fictions of 2020 and elsewhere. "Mannequin and Wife" was published in September by LSU Press. 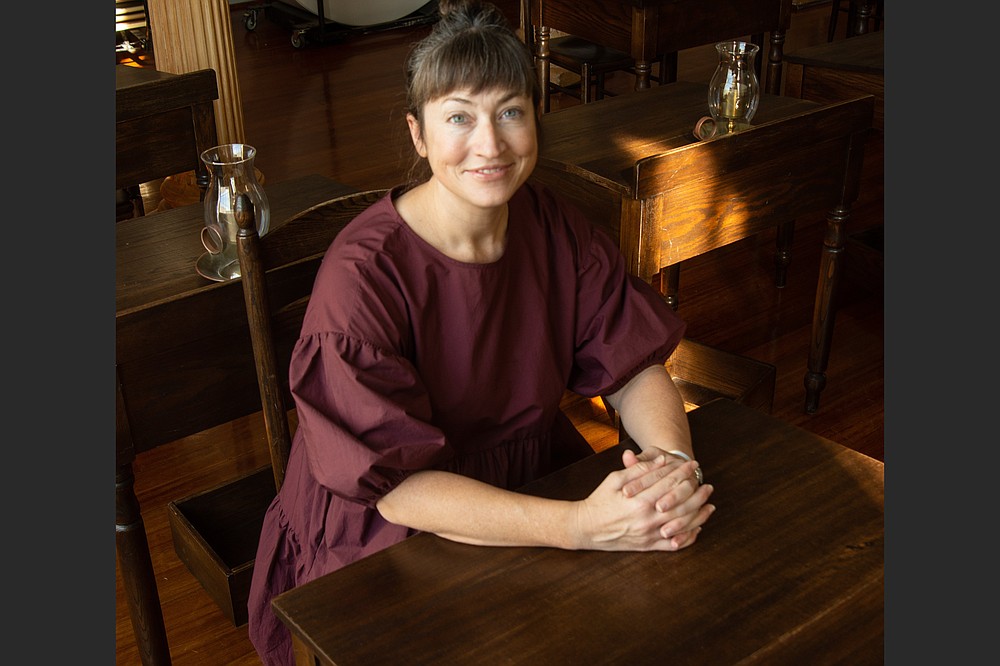 In the following telephone interview, conducted last month a few days before she was to appear at the Six Bridges Book Festival in Little Rock and edited for clarity and length, Fawkes talks about writing, the immediacy of flash fiction, imaginary friends and her hopes to start a writing collective in Central Arkansas.

Q: Was "Mannequin and Wife," the last story in the book, always going to be the title story?

A: No. I was originally going to call the book "Sometimes They Kill Each Other," and I had "Mannequin and Wife" at the beginning and "Sometimes They Kill Each Other" at the end, but my editors at LSU Press did not like that title and I can see that. "Mannequin and Wife" is also a fantastic title and one of my most recent stories.

I was working on a novel for almost three years and after I finally finished what I felt like was the final draft, "Mannequin and Wife" was the first story I wrote. I'm really interested in couples, in paired people. We couple. That's what we do. Each of the stories in the book has an important pairing at its heart, either siblings, parent-child, a married couple, co-workers. With "Mannequin and Wife," I wanted to write about a couple who go through extreme hardship and are still OK. To me, it is hopeful and beautiful at the end.

A: I was thinking about this this morning. I read a short piece by a writer named Vincent Scarpa. He is this wildly talented guy and he wrote a short, personal essay in which there is a "pocket-sized woman with a cobweb of white hair." That's the only line where he described her in the whole piece, but she is permanently lodged in my mind. She is part of this cast of characters that I have read and encountered — not just in books. I'm a huge film buff. I think of them as living in my head and having my own little Greek chorus. It's probably a leftover childhood impulse. They are comforting to me.

Q: Speaking of Greek choruses — Beatrice, from your story "Iphigenia in Baltimore," is fascinating. How did she come about?

A: I started that when I was working on my MFA. I wanted to write a story about a virgin who writes pornography. I knew there were rich possibilities there. At the time, I was the same age as the character — my husband and I have only been married about a year, so I was a childless spinster most of my adult life [laughs].

Another thing that [affected] that story was that I was reading stories submitted to a literary journal called Shenandoah, one of the oldest and most respected literary journals in the country. The first thing I read was a story by Clare Beams, "We Show What We Have Learned." It is told from the point of view of an elementary school teacher who literally falls apart in front of her students. The teacher figure in that story made me think, let me try to make my character an elementary school teacher and see how that works. It was through there that the rest of the story began to evolve.

[Inspiration] is everything. It's your own life, it's stories you overhear in a coffee shop, it's some crazy fact you read researching something else. All of these things come together and will influence and bear on a story.

Q: She also has superhuman strength, which complicates her attempts at intimacy.

A: That was not part of the plan, but I like to be surprised. We need to be shown something new in work while at the same time being comforted as audience members. That's one reason fashion keeps coming back around, but in different ways. We all want something comforting and familiar, yet we want for it be different enough to feel like we're getting a new experience. All writing, I think, is finding this balance, walking this line between what can I give them that is new and what can I give them that is familiar.

Q: Does the way you tell stories — weaving in and out of reality and mixing genres like horror, fantasy, noir, courtroom drama — feel the most natural to you?

A: I don't know how much is natural or how much is the influence of my parents and the things I read as a child. I was raised on Edgar Allan Poe, "The Twilight Zone," Alfred Hitchcock. I grew up on all of that. My mom wanted to be a writer and was a voracious reader. When I was bothering her, she would give me some wildly inappropriate book and tell me to go read. We had a record of Vincent Price reading Poe stories that I would listen to over and over again as a child.

I also love to bring seemingly unlike elements together in all of my work, whether it's a piece of genre work or characters who don't seem like they would mix. When you do that, you gently force the reader to see the similarities between elements instead of the differences, which I think is healthier for everybody.

Writing is the most rewarding and wonderful thing I've ever done. On the flip side, it's the most difficult. We write what we want to read. We can write well only the kind of work we ourselves truly enjoy. In order to commit yourself to the hard, hard work that is writing, the material you are working on needs to be something you love.

Q: Among the longer pieces in your book there are shorter, flash fiction stories. Do they take as much work as the longer stories?

A: Ultimately, they are easier. It took me several years of writing to come to a place where I could do those. It's a different impulse. There is something about it. It has a real immediacy to it. For the flash pieces, I will sometimes know the ending before the ending, which never happens in a longer story. In a longer story, I always have to write my way there to see what the ending is going to be. Ending a story to your satisfaction and seeing it move and flow and come to life is so rewarding. But when you are working on something long, it takes months or years to get there. With flash, I can write one of those in a few days. I get the reward that all writers are living for and hoping for much more quickly.

Q: How often do you write?

A: I try to write every day. For many years, I wrote every day. I started late. I decided I was going to start writing when I was 30 and I just threw myself into it. Anytime I wasn't working at a job, I was writing. I gave so much of myself to it. Now with work and family, under normal circumstances, I like to write at least three hours a day. Flannery O'Connor famously wrote for three hours in the morning every day. I'm a morning person, so I like to do three hours in the morning. Also, if you take much of a break from something for a day or two, it's harder to get back to it.

Q: When was your first story published?

A: The first story of mine that was published was my 17th. It was called "No Fun Anymore" and was in the Berkeley Fiction Review in 2009. It's a magical feeling. I was working on my MFA and had been submitting work and getting encouragement. Getting that first acceptance was huge.

Q: You have another collection of short stories coming next, right?

A: Yes. That book is called "Tales the Devil Told Me" and it takes a look at popular literary villains and re-imagines their stories. For instance, there's a story about Captain Hook.

Q: I just read "Peter Pan!" I can't wait to see what your take is on Hook.

A: In my story, Captain Hook has left seafaring behind and taken a job at the post office. It's told from the point of view of his stepson, Peter.

There's a story told from the point of view of the whale in "Moby-Dick" who writes a letter to Ahab. [Laughs] There's a story about a plastic surgeon trying to date Medusa. [More laughs]

Q: OK, these sound great. Are you working on anything else?

A: I'd like to start a Central Arkansas creative writing collective. Something like how the Arkansas Arts Center offers classes in pottery and studio art. I'd like to offer creative writing classes to the community. My first writing classes that I ever took were in Asheville, N.C., through a community writing program and they were phenomenal. That's why I'm writing now; I went to these writing classes and saw people from different walks of life, different ages, backgrounds, all coming together and telling their stories to each other. I would love to someday down the road start a writer's organization that offers classes and workshops.