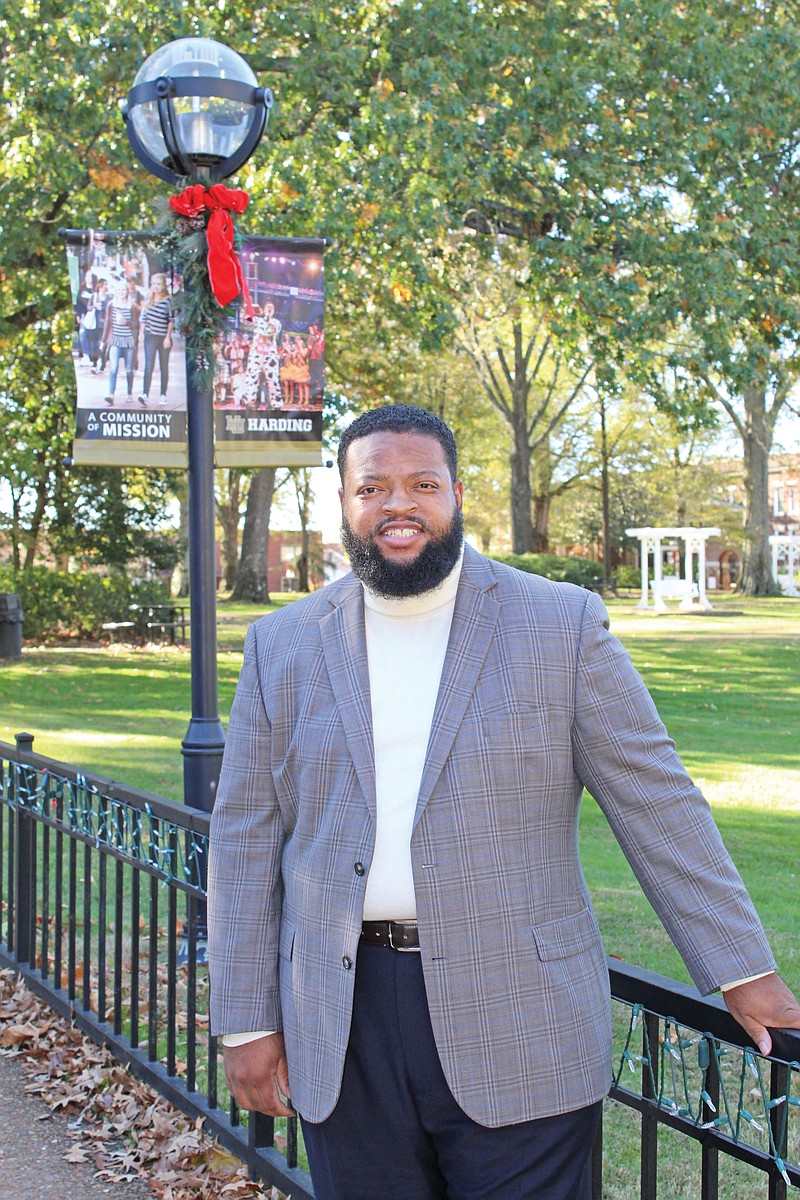 Andrew Braxter is the new director of church outreach for Harding University in Searcy. He is also the senior pastor at Rose City Community Church of Christ in North Little Rock. ( Sam Pierce)

SEARCY — Andrew Braxter has been in ministry since he was a kid, giving his first sermon when he was 8 years old.

“I can’t explain it — it is all I remember, wanting to do it,” Braxter said. “It has been my dream as far back as I can remember. I have videos of me preaching — they are at my parents’ house in Alabama.

“I love preaching, and I love helping people, and I believe this is what God has called me to do.”

His first sermon wasn’t even at his home church. He said he knew a preacher at a different church who knew Braxter wanted to be a preacher.

“We would go to the church on Sundays and on Wednesday nights, and one night, he said, ‘If you want to preach, you can do it on Dec. 20, 1998,’ which was maybe a week and a half away …,” Braxter said. “I was just tall enough to see over the pulpit, but the people actually received me. I preached for eight minutes. Honestly, it was cute at the time, but I was very serious about it. I was serious about my calling.

“I was as serious as I could be at 8 years old to be a preacher.”

Now more than 20 years later, Braxter is the new director of church outreach for Harding University in Searcy. It is his job to help build relationships with underrepresented African-American or Latinx churches and open doors for recruiters through those relationships.

“I make the connection with pastors or leadership teams and build a relationship on behalf of the university,” Braxter said. “My primary job is to open the door and build that relationship so our recruiters can go in behind me and do their job.”

He said that under normal circumstances, he would host luncheons or dinners and give an introduction to Harding University and how the college could be a benefit to the church’s students. He said that afterward, a time would be set up for recruiters to come through.

“COVID-19 has changed a lot of that,” Braxter said. “I have not done any traveling, just because of how high the [COVID-19] numbers have been.

“Normally, we would set up visits on campus, tours for pastors and ministers, but we have not done any of that because of COVID-19. … We are doing more phone calls, virtual meetings — things like that. COVID-19 has shaken up everything.”

Someone else who has know Braxter for years is Richard Barclay, the senior pastor at Stonecrest Church of Christ in McDonough, Georgia, south of Atlanta. He has known Braxter since he was a student at Southwestern Christian College in Texas. Braxter participated in a mentorship program one summer, and Barclay joked that ever since then, he has not been able to get rid of Braxter].

“Traditionally, Harding has not had a good track record, since the ’50s and the ’60s, of integration,” Barclay said. “They are a wonderful academic institution that I have admired, but in terms of social outreach and racial outreach, they embrace the culture’s attitude toward African-Americans.

“To their credit, they have taken the right steps toward inclusion and social justice, and I applaud them for that. Andrew will help them, given his ability to adapt to the environment and his connection to the African-American church, and that should do [Harding] good, and it will do him good.

“I would be disappointed if he didn’t do well. I have encouraged him over the years, and given his personality, he is very adaptable and adjustable and will do well in terms of communication, wherever he finds himself.”

Braxter, who lives in Maumelle, moved to Arkansas in December of last year to be the senior pastor at Rose City Community Church of Christ in North Little Rock. He started working for the university on Aug. 10.

“Andrew is uniquely gifted in terms of preaching and singing,” Barclay said. “He is just an outgoing, personable kind of guy.

“He sticks with you. … He is like a sponge and wanted to learn everything he could about ministry and preaching. I took a real liking to him.”

Braxter is currently working on a Master of Divinity degree at Harding School of Theology. He also works for Hardy Funeral Home in Little Rock.

“I know that more than anything else, preaching is the passion of his heart and life,” Barclay said. “In the terms of his relationship and role at the college, I think he has the flexibility to give them what they need.

“He would not have accepted the responsibility without being fully committed to the task and challenge at hand.”

Braxter, who is a first-generation pastor, said his dad was not a preacher but was a leader in the church.

“I just remember having a burning desire to want to preach …,” Braxter said. “I didn’t have anyone in my family to look up to [in that respect], but I remember my first preacher as a kid, K.K. Mitchell. I wanted to be like him.

“He actually died in February of 1998, and I started preaching that December.”

Another colleague of Braxter’s is Justin Wallace, a pastor at College Heights Church of Christ in Pine Bluff. Wallace has known Braxter for about six years.

“Andrew is very organized and intelligent,” Wallace said. “He lives his life to a standard of excellence. … We used to study together, and I can’t count the number of times we would bounce ideas off of each other.

“He is so kindhearted and has always been there for me in a variety of ways.”

Wallace said he believes people at Harding will find Braxter to be good-natured.

“He is a person that everyone draws to; people want to be around him,” Wallace said. “He will do an awesome job in that position. He has the ability to be personal with anybody — he is very approachable.”

Braxter said his journey into ministry and higher education has definitely been an interesting one.

“I was sharing with my church the other day, how everything I saw as a child, God would use it to get me ready for the things I am embarking on now,” he said.