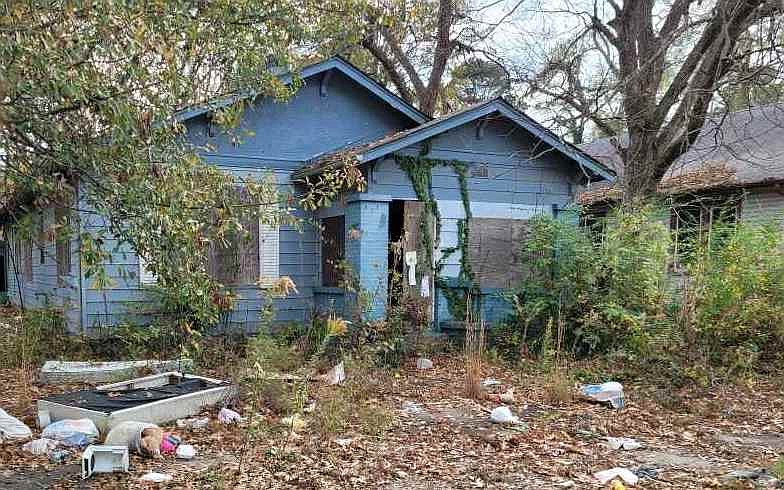 The next property in the Urban Renewal Zone is this house at 1206 W. 18th Ave., which Taggart said is scheduled for demolition on Tuesday. Taggart said in the coming year, his goal is to remove 100 blighted properties. (Photo Courtesy Pine Bluff Urban Renewal Agency)

With the New Year fast approaching, Maurice Taggart, executive director of Pine Bluff Urban Renewal Agency, has a lot of plans for the city and a desire to get things moving.

The Urban Renewal Agency, which was reconstituted in 2017 and is funded with revenue from the 2017 five-eighths percent sales tax, is tasked with implementing a revitalization plan for downtown Pine Bluff that encompasses renovations of some downtown buildings along Main Street and plans for a housing development to be located just one block off Main Street on a 3-acre tract of property bordered by West Third Avenue and West Fourth Avenue to the north and south, and by North Pine Street and North Chestnut Street to the east and west.

Another part of the agency's mission is the removal of blighted properties in the three Urban Renewal Zones, the largest of which forms a square bordered by Martha Mitchell Expressway to the north, West 34th Avenue to the south, South Hazel Street to the west, and South Ohio Street to the east, an area that encompasses about 6 square miles and includes Downtown Pine Bluff.

"When I came on board, there was a map that outlined some 600 blighted properties throughout the city," Taggart said. "That map has changed considerably since then."

Since Taggart came to the agency in September 2018, he has overseen the removal of 54 blighted structures inside the Urban Renewal Zones, but has dealt with setbacks and delays as well, with blight removal operations suspended for nearly a year from May 2019 to April 2020 after the agency's legal authority to perform demolition work was challenged.

In May 2019, City Attorney Althea Hadden-Scott issued an opinion that no legal authority existed for the agency to act as an agent of the city, meaning that any blight removal activities it undertook could only be performed on properties the agency had acquired ownership of. Once he was notified of the opinion, Taggart ordered that blight removal activities be suspended immediately. In November 2019, Arkansas Attorney General Leslie Rutledge issued an opinion that an Urban Renewal Agency could legally operate, provided the city and the agency had a cooperative agreement in place.

That agreement was drafted and ratified by the City Council the following month, and after recruiting and hiring a heavy equipment operator, a truck driver, and an urban renewal agent, blight removal operations resumed last April.

Adding to the list of blighted properties are structures that are classified as an imminent danger to health and safety, according to the International Property Maintenance Code Section 109.1, which states that if there is a danger of failure or collapse of the structure, part of the structure has fallen, or if any danger exists to occupants from explosives, fumes, vapors, or the presence of toxic fumes, gases or materials, then the code official may order the structure vacated.

Many structures in the city that fit that description have burned at some point, with many of those burned structures still standing unattended as the buildings continue to deteriorate. Taggart said those pose a danger to residents; create an eyesore; depress property values; and oftentimes become nesting places for snakes, rodents or other animals.

Jimmy Dill, a member of the Urban Renewal Agency governing board, said many burned-out or caved-in structures in the city also become hangouts for homeless people or centers of illegal activity, including drugs and prostitution.

"These burned-out, blighted structures aren't just an eyesore," Dill said recently. "They are a danger to the people who live in those neighborhoods. There are some people living around these blighted properties that are afraid to leave their homes because of the constant traffic, illegal activity and threat of violence."

A proposed ordinance that will come before the City Council for consideration next month would give the city authority to remove any structure that has been declared condemned after 15 days. Currently, the law in effect provides that authority within "a reasonable and given time therein named," but does not define what that time is.

The ordinance also proposes a new section to the city code that would define a burned-out structure as one that has damage exceeding 50% of the cost of repair or restoration, and would give the owner 15 days to raze and remove the structure, after which time the city would be authorized, although not required, to do so.

"If this is approved, that will expedite the process of removing these burned-out houses," Taggart said. "Our fire chief told me there are currently about 200 burnouts around the city, and that number is added to by about 30 structures a year, so we need to be able to deal with them."

Taggart said the primary goal is not to tear down houses, but rather to find the most effective way to return these properties from the dilapidated condition they are in to properties that are once again functioning parts of their neighborhoods, providing space for people to live or work and providing tax revenue for the city and school district.

"It doesn't do anyone any good for these houses to sit empty, falling apart, overgrown and surrounded by weeds and debris," he said. "We want these properties to become functional once again, and our preference is for the property owner to take measures to bring the properties back up to code, but if they can't or won't, then we have the authority to step in."

The process of blight removal, Taggart said, is time consuming and involves several steps in the legal process, and currently requires a minimum of 111 days from the time a property is inspected by the city Code Enforcement Department to the time the structure may be razed.

Taggart said the first step if a property is in violation is to send the property owner a notice, which takes three to six days for response. If there is no response, he said, a second notice is sent, and if the owner cannot be located, a notice must be run in the newspaper twice over a two-week period. After either a response from the owner or the publication of the notice, 60 days is then given for the owner to have time to resolve the problem. And if that time expires with no resolution, the Code Enforcement Department then can request a condemnation order from the city's Development and Planning Committee, which, if approved there, is then sent on to the full City Council for approval.

After a property is condemned, the owner is given 30 days to remove it, after which time the agency must provide the Arkansas Division of Environmental Quality a notice of intent; then demolition may be scheduled not less than 10 days after filing of the notice.

"The owner can get an extension by requesting it, so if two notices are sent out, they have two opportunities to get an extension," Taggart said. "Right now, 111 days is the shortest amount of time that can elapse between the inspection and removal of a property, and that's if no extensions are granted. It can easily take 150 days or more."

Taggart said that to streamline the process, as soon as he receives a condemnation notice from Code Enforcement, he places the property on his schedule for demolition with the first available date after expiration of the 30-day period following condemnation as well as the 10-day waiting period associated with the notice-of-intent filing with ADEQ.

Even though his desire is to return properties to usefulness, there are still many blighted properties in the city that are beyond rehabilitation. And now that he has his demolition crew in place and hopes of streamlining the process, Taggart plans to hit the ground running in 2021.

"Beginning in 2021, my goal is to remove 100 blighted properties a year," he said. "If we can do that, we'll see some measurable progress in getting this under control." 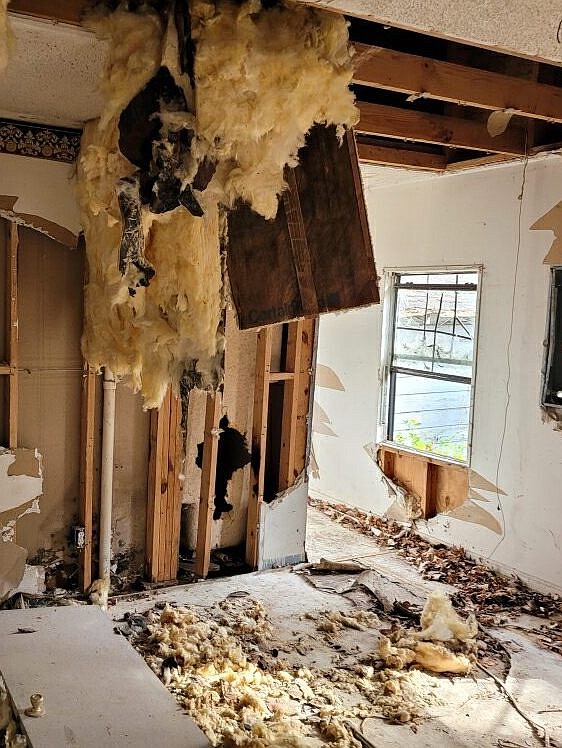 The interior of the house at 1206 W. 18th Ave. shows significant damage, making the property a prime candidate for removal as the structural components of the house have deteriorated to the point that renovation would likely be a prohibitively expensive undertaking. The house is scheduled for demolition on Tuesday by the Urban Renewal Agency. (Photo courtesy Pine Bluff Urban Renewal Agency)
ADVERTISEMENT