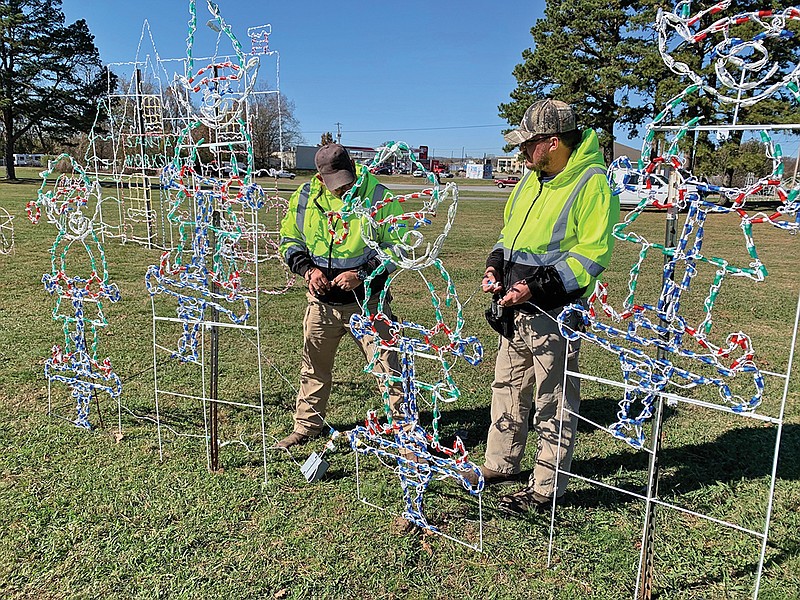 City of Batesville landscaping department employees Donald McIllwain, left, and Timothy Duez work on a lighting display of elves at White River Wonderland. Lights go on the day before Thanksgiving. A new attraction this year is a 70-foot-tall LED Ferris wheel that is to be located near the amphitheater. Tickets to ride are $5 and must be purchased online.

BATESVILLE — Visitors to the White River Wonderland in Batesville will have an opportunity to see the city’s 1.5 million lights from a new perspective: They will have a view from above, on a Ferris wheel.

The lights will go on Wednesday night before Thanksgiving and remain lit from 5 to midnight nightly through Jan. 3, said Johnathan Abbott, city of Batesville cemetery/landscaping supervisor, and just like every year, there are some new attractions to the lighting displays in and around Riverside Park, 1850 Chaney Drive.

The Batesville Area Chamber of Commerce has partnered with the city to present the Ferris wheel, which is on loan from PBJ Happee Days Shows of Marion.

“These are the same people that do the [county] fair,” Abbott said Tuesday as he was still supervising his crew at 7 p.m. while traffic continued to flow in and out of the park.

“The mayor has been wanting [a Ferris wheel] and thought it would be good to view the lights from a different perspective,” said Abbott, who has more than 30 years of service with the city of Batesville. “We’ve been looking into this for a few years, so when the chamber decided that was a project they wanted to do, I was thrilled to connect with them.”

Online reservations are required. Tickets are $5 for ages 2 and older. To book a reservation, visit https://experience-independence-merchandise.myshopify.com/collections/experiences.

The Ferris wheel is already proving to be popular, with the city booking 500 rides so far, according to the chamber of commerce.

Crystal Johnson, chamber president and CEO, said several area residents had asked about adding a Ferris wheel over the years, so the chamber is proud to partner with the city, as well as other community organizations, to bring this new attraction to the Wonderland.

Jamie Rayford, chief operating officer for the chamber, agreed that there had been a lot of interest in adding a Ferris wheel.

“It has been a topic of every festival or annual-event conversation I have ever been a part of in the past six years,” Rayford said.

Johnson said the availability of the Ferris wheel, combined with the ability to offer rides while complying with CDC guidelines, is what made the attraction possible this year.

“COVID-19 forced rapid change, resulting in negative impacts for many families, community members and businesses,” Johnson said. “By providing safe opportunities to make memories at White River Wonderland, we will all be reminded that truly what matters most has never changed.”

This year, things may look a little different with the COVID-19 pandemic, but Abbott said city crews have worked diligently to get ready to bring some Christmas cheer to the city.

Returning attractions include the horse-drawn carriages, the White River Wonderland Express train, an addition in 2018, and the ice-skating rink.

Hours for the carriages and train rides are 5:30-9 p.m. Sunday through Thursday and 5:30-10 p.m. Friday and Saturday. However, neither will run during inclement weather, such as rain, snow and sleet, or extremely cold temperatures.

“Everyone — [operators of] the Ferris wheel, carriages and train — will have to sanitize between rides,” Abbott said.

Ice skating under the lights of the amphitheater will return, but there will not be party reservations this year. The ice-skating rink will be open Friday through Jan. 3 (closed Dec. 24 and 25), and the cost is $5 per person for one hour, with skates provided. Hours are from 6-9 p.m. Monday through Thursday, 6-10 p.m. Fridays, 1-10 p.m. Saturdays and 4-9 p.m. Sundays.

Abbott said the park has about 40,000 cars visit each holiday season, and while some are first-timers from out of town, he also sees a number of familiar faces who make weekly or even nightly trips through the park.

Some new features will include the lights at the new Sara Low Memorial Dog Park, just across the street from Riverside Park, as well as a new 30-foot Christmas tree and countless other lights.

“We’ve also added a Back the Blue area to our display. Earlier this year, there was a group that sponsored a Back the Blue event at the park, and they gave us a donation that helped us purchase the lights,” Abbott said.

“We’ve added a whole bunch of lights. We’ve tried to count as much as we can, but we’re right in the middle of this, and we don’t always keep count. We have also converted some of our regular incandescent lights to LED lights, but that’s a very expensive endeavor,” he continued, noting that commercial LED strands range between $15 and $17 per strand, compared to $2 to $3 for a strand at retail stores.

“We are going to have a walk tunnel, but it’s changed because they have removed that bridge,” he said, explaining that the U.S. Army Corps of Engineers is working on a bank-stabilization project and had to remove a pedestrian bridge on which the city built its tunnel-of-lights walkway.

“The walk tunnel is going to be on the bridge you actually drive over. There is a wide shoulder on that bridge, and we put up some concrete barriers to protect pedestrians,” Abbott said.

He said the city usually asks for donations for the project throughout the year but did not do so this year.

“We didn’t want to lean on small businesses in this pandemic, but some have stepped up and come to us,” Abbott said.

“One of the things we have added is sound. A lot of people asked why we didn’t have music playing throughout the park, as it is played on 88.1 FM, and White River Health System provided donations for that. Now when visitors get out and walk, they will still be able to hear the music that the lights are flashing to,” Abbott said.