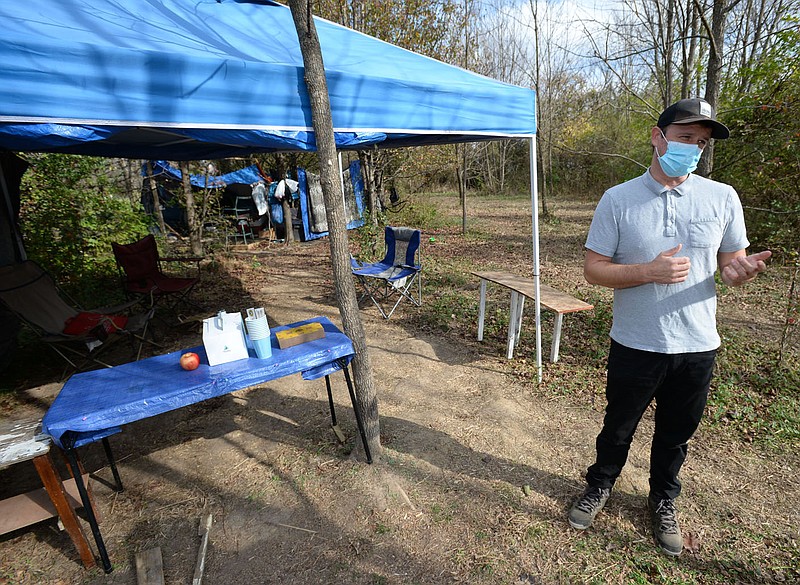 FAYETTEVILLE -- The people who live at a sanctioned camp on the southeast part of town say they're part of the neighborhood and behave accordingly.

Residents check on each other. Volunteers drop off three meals a day. Campers stay hygienic with on-site showers and handwashing stations. Anyone who suspects exposure to covid-19 has access to testing. Residents adhere to a code of conduct to keep their tents clean, respect each others' belongings and resolve conflicts.

The site is called Safe Camp, set up on about 13 acres of city land west of Curtis Avenue between Huntsville Road and 15th Street. 7 Hills Homeless Center established the camp in late July using about $85,000 in federal Coronavirus Aid, Relief and Economic Securities Act money administered through the city's Community Resources Division.

There were 35 people registered at the camp Tuesday and 19 were enlisted in 7 Hills' HOPE program to get housing.

The camp is intended to prevent the spread of covid-19 among people experiencing homelessness. People without a place of their own must often travel to get their basic needs met. The idea for Safe Camp was to provide one place where vulnerable people could live without frequently moving around the city, homelessness advocates said.

People were already living at the site before the pandemic hit. The city's largest campsite was on land owned by the University of Arkansas near 19th Street. University police in fall 2018 cleared it citing unsafe conditions. The 100 or so people living there spread out. Some stayed overnight at the Salvation Army or found housing through the U.S. Department of Veterans Affairs or 7 Hills.

Many continued to camp in spots throughout the city.

Jack, 64, and James, 56, were among a few people who took refuge at the site of what would become Safe Camp after leaving the 19th Street camp. Both declined to provide their last names or have their pictures taken.

The two, along with a handful of other campers, helped establish the rules for the community. There's a strict prohibition on stealing or using weapons. People are asked to keep their areas tidy. Violent behavior is unacceptable. Everyone who lives at Safe Camp has to register.

The camp is serving a need, the two said. Some people who live there have jobs or receive disability benefits, but can't afford a home, they said. Some can't get a job because they have felony records, they said.

The camp might set up mailboxes for people to use. Residents can use 7 Hills as a mailing address, but there's a stigma attached, Jack said.

"Here in Fayetteville, a lot of places know that address and as soon as they read it on an application or whatever, it's an automatic red flag," he said.

The community welcomes visitors as long as they behave respectfully. James wanted to give the foot paths at the camp fancy French names, making the place more inviting.

"As far as being homeless and saying we've got something, we actually do," he said.

No more than 50 have lived at the camp at any one time, said Jessica Andrews, 7 Hills chief executive officer. A total of 73 have lived there so far. Six found housing. Some decided to camp elsewhere, while others were expelled for bad behavior, she said.

The money for the camp has gone toward food, supplies, basic amenities, client outreach and case management, Andrews said. People living at the camp received tents, chairs, first aid and hygiene kits, flashlights, phone chargers, pet supplies and tarps. Showers, handwashing stations and restrooms are set up at the site, with trash bins and a prefabricated service building.

Program money paid for meal prep and delivery three times a day from late July through October. Volunteers from area churches such as St. Paul's Episcopal and Genesis Church and groups such as MayDay Community Kitchen and Muslims for Community stepped up this month to provide food, said Solomon Burchfield, who has helped manage the campsite.

It takes a lot of work for those volunteers to consistently get food, cook it and deliver it to the camp, he said. Campers help with picking up food and clean up afterward.

"It truly is a beautiful thing," Burchfield said. "The campers have really expressed a lot of gratitude seeing different members of the community."

The volunteer work has helped the program save money for supplies to get through December, Andrews said. The program originally was intended to last through October, but 7 Hills staff found ways to cut costs and keep it going longer. The hope is to keep the camp open through winter, she said.

"We're not quite sure what that looks like or where funds would come from for that just yet," Andrews said.

The campers have access to personal protective equipment. Signs throughout the site remind people of best practices during the pandemic. One covid-19 testing event was held at the camp, and another at the Salvation Army, Andrews said. People also can receive testing as needed and transportation is provided to get a test, she said.

A quarantine camp space is set up for those possibly exposed to covid-19. So far, three have had suspected exposures, but no positive cases, Andrews said.

Burchfield said much of the work to curb covid-19 has been preventative. Campers can spread out on the acreage and make frequent use of the handwashing stations. Staff members, volunteers and campers keep tabs on how everyone is doing, he said.

"My antenna is way up if someone is coughing or someone feels bad, or if I hear somebody feels bad," Burchfield said.

Other sanctioned campsites or villages for people experiencing homelessness have recorded varying degrees of success.

Dignity Village in Portland, Ore., provides shelter for up to 60 people every night who live under a system of self-governance, according to its website. It sits on city land. Most people live in basic structures made from recycled or reclaimed material. Villagers pay $50 per month to cover operating expenses, while other revenue comes from private donations.

The Portland City Council sanctioned the project in 2004. The website for Dignity Village touts the community as the longest-running city-sanctioned village for the homeless in the United States, saying it serves as proof such a program can work.

Although never officially sanctioned by city officials, Transition Park in Camden, N.J., was disbanded in 2010 because of unsanitary conditions, violence and other major problems, according to a story in The Nation. Hundreds of people ended up scattering throughout the city.

Self-governance combined with support from local organizations and government is key to a camp's success, said Donald Whitehead, executive director of the National Coalition for the homeless.

"When there is a failure, that's why there is a failure. The city can't just leave it to its own devices. There needs to be some sort of collaboration with city officials, service provider organizations and the health departments so the things they need to be able to be safe and healthy are provided," Whitehead said.

The Centers for Disease Control and Prevention says camps should remain intact during the pandemic, but people living outdoors should be provided resources to help limit the spread of covid-19.

Sanctioned camps should not serve as an alternative to affordable housing, Whitehead said.

"It is always my hope when cities sanction an outdoor facility, it is not an excuse not to do the harder job of providing permanent housing for people who are in homeless situations," he said.

Safe Camp could serve as a part of a long-term housing solution for Fayetteville and Northwest Arkansas, Burchfield said.

Another program in the works is New Beginnings Bridge Housing Community, a microshelter project planned to have 20 prefabricated houses on about 5 acres just south of 7 Hills. Burchfield is serving as program director for the project. Groundwork began last month and the nonprofit behind the project hopes to have it open within the first few months of next year.

Housing is crucial to a person's health, employment and overall well-being, Burchfield said. Even if successful, emergency measures such as Safe Camp and New Beginnings must serve as part of a larger strategy to address homelessness, he said.

James said he felt the city could find a way to put more money from the budget toward that larger strategy. Right now, the city allocates $113,400 to 7 Hills and operates a housing and aid program through its Community Resources Division.

Jack said he hopes to at least be able to stay in one place for the first time in a long time.

"Where I'm camped at now, that's my home," Jack said. "It might not be four walls and a ceiling -- it's a tent. But still, that's my home. Everything I own is there." 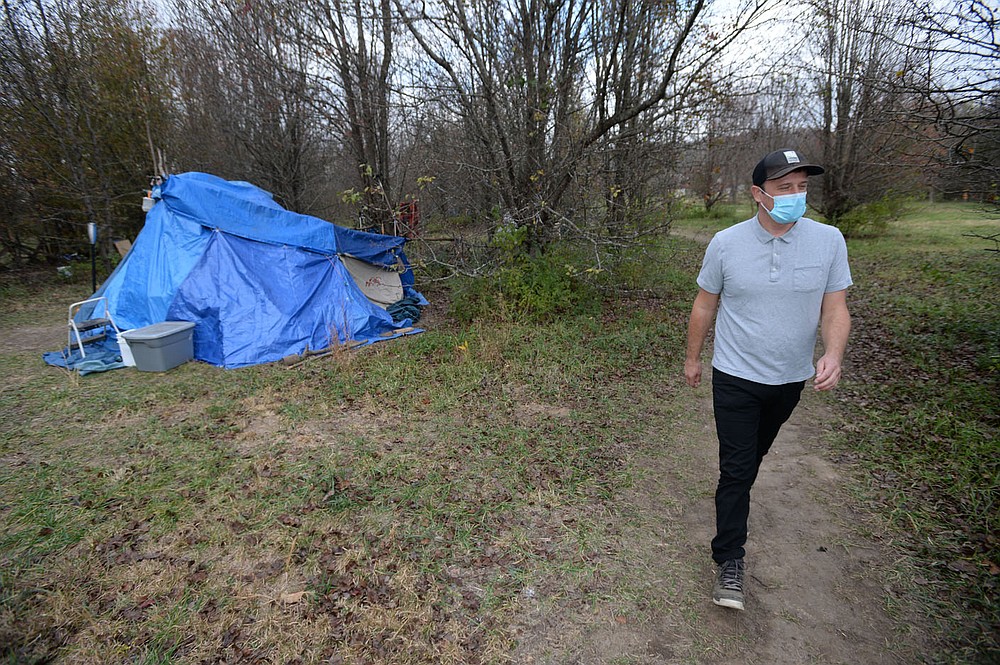 The following organizations are helping people experiencing homelessness in the region stay safe and fed. They need help, too. Donations can be made online or by calling for more information.