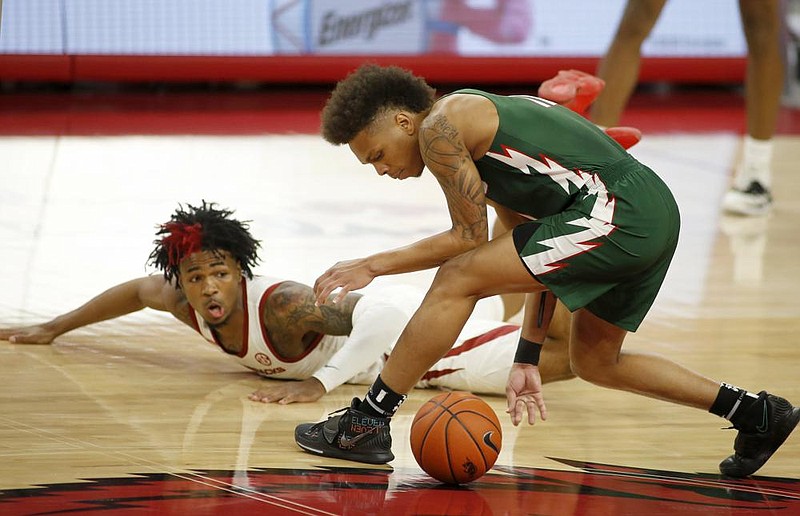 FAYETTEVILLE -- At halftime of the University of Arkansas basketball team's season opener against Mississippi Valley State, the Razorbacks were shooting a higher percentage on three-pointers than on shots inside the arc.

And the Razorbacks were shooting 50% of their shots that weren't three-pointers.

Arkansas cruised to a 142-62 victory over the Delta Devils on Wednesday night in Walton Arena with a dominating first half in which they hit 12 of 19 three-pointers (63.2%) to take a 61-30 lead.

[Video not showing up above? Click here to watch » https://www.youtube.com/watch?v=l0GpSUe1mLo]

Connor Vanover, a 7-3 sophomore from Little Rock who redshirted last season after transferring to California, led Arkansas with 23 points, 8 rebounds and 3 blocked shots in 17 minutes off the bench. He hit 8 of 11 shots and 4 of 5 three-pointers.

Vance Jackson, a 6-9 graduate senior transfer from New Mexico, scored 15 points for the Razorbacks. He hit 5 of 9 shots and 4 of 6 three-pointers.

The Razorbacks hit 8 three-pointers in that stretch, including 4 by Jackson and 2 by Vanover. Robinson and Sills also hit three-pointers.

Vanover started the run with a rebound basket.

Mississippi Valley State went on a span of 7:25 without scoring -- and missed 15 consecutive shots -- before Alexander Perry made a layup to cut Arkansas' lead to 41-10.

Arkansas won its 46th consecutive home opener, including its 28th in Walton Arena.

Razorbacks Coach Eric Musselman is 6-0 in season and home openers, including 2-0 at Arkansas and 4-0 at Nevada.

The Delta Devils did get to enjoy having the lead -- 3-2 after a three-pointer by Kam'ron Cunningham 20 seconds into the game -- before Smith dunked to put Arkansas ahead to stay at 4-3 with 17:26 left in the half.

Mississippi Valley State came into the game ranked last nationally among NCAA Division I teams by KenPom.com -- a college basketball analytics website -- at No. 357 after the Delta Devils were 3-27 last season.

UP NEXT Arkansas plays North Texas at 5 p.m Saturday at Walton Arena in Fayetteville. 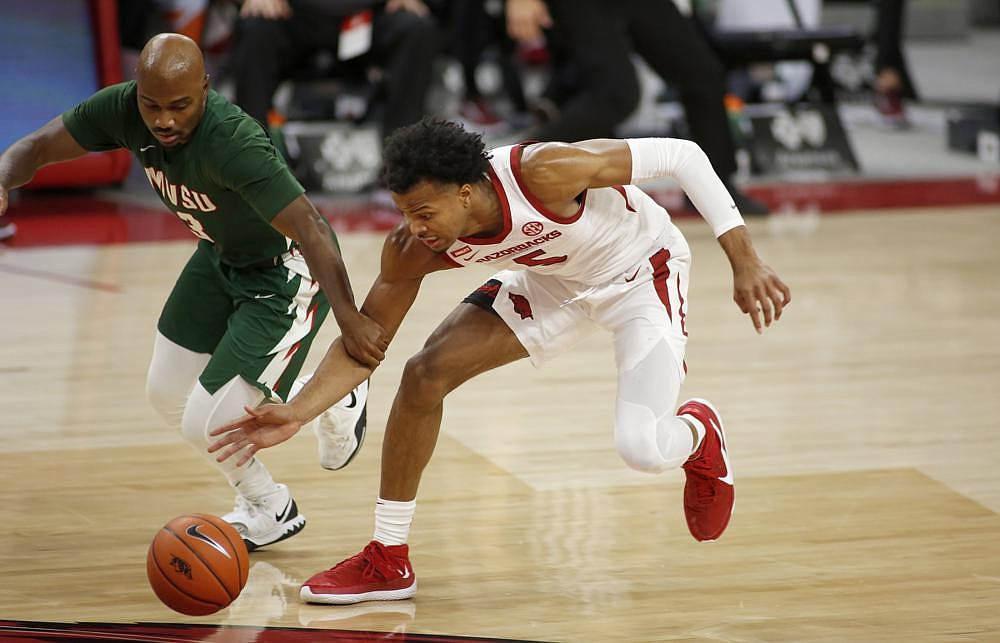