The Pope and the pandemic 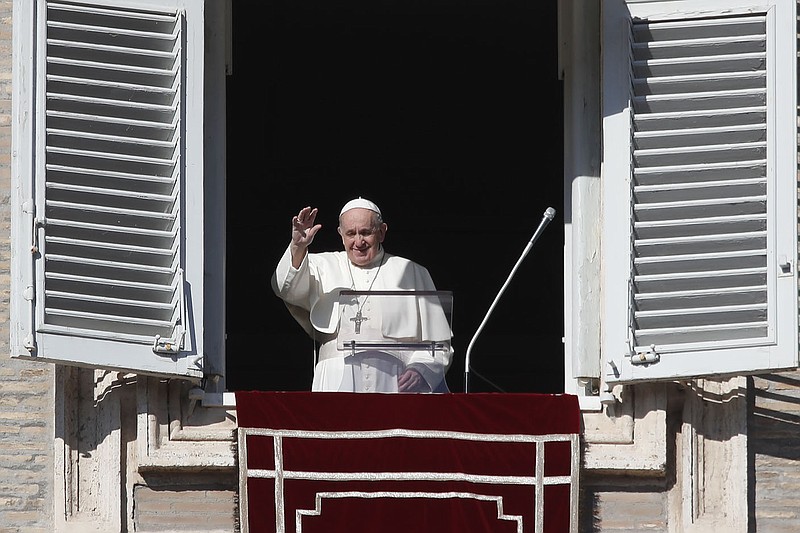 Pope Francis waves as he arrives for the Angelus noon prayer from the window of his studio overlooking St.Peter’s Square, at the Vatican, Sunday, Nov. 22, 2020. (AP/Alessandra Tarantino)

Pope Francis is supporting demands for racial justice in the wake of the U.S. police killing of George Floyd and is blasting coronavirus skeptics and the media that spread their conspiracies in a new book penned during the Vatican's coronavirus lockdown.

In "Let Us Dream," Pope Francis also criticizes politicians who whip up rallies in ways reminiscent of the 1930s and the "rigid" conservative Catholics who support them. But he also criticizes the forceful downing of historic statues during protests for racial equality this year as a misguided attempt to "purify the past."

Pope Francis collaborated on the 150-page book with his English-language biographer, Austen Ivereigh, and at times the prose and emphasis seems almost more Ivereigh's than the pope's.

At its core, "Let Us Dream" aims to outline Pope Francis' vision of a more economically and environmentally just post-coronavirus world where the poor, the elderly and weak aren't left on the margins and the wealthy aren't consumed only with profits.

But it also offers new personal insights into the 83-year-old Argentine pope and his sense of humor.

At one point, Pope Francis reveals that after he offered in 2012 to retire as archbishop of Buenos Aires when he turned 75, he planned to finally finish the thesis he never completed on the 20th-century German intellectual, Romano Guardini.

The publisher said the book was the first written by a pope during a major world crisis, and Ivereigh said it was done as a response to the coronavirus and the lockdown. For Pope Francis, the pandemic offers an unprecedented opportunity to imagine and plan for a more socially just world.

At times, it seems he is directing that message squarely at the United States, as Donald Trump's administration winds down four years of "America first" policies that excluded migrants from Muslim countries and diminished U.S. reliance on multilateral diplomacy. Without identifying the U.S. or Trump by name, Pope Francis singles out Christian-majority countries where leaders seek to defend Christianity from perceived enemies.

"Today, listening to some of the populist leaders we now have, I am reminded of the 1930s, when some democracies collapsed into dictatorships seemingly overnight," Pope Francis wrote. "We see it happening again now in rallies where populist leaders excite and harangue crowds, channeling their resentments and hatreds against imagined enemies to distract from the real problems."

People fall prey to such rhetoric out of fear, not true religious conviction, he wrote.

Pope Francis addressed the death of Floyd, a Black man whose death at the knee of a policeman set off protests this year across the United States. He also reflected on the sexual abuse crisis in the Catholic Church and other #MeToo abuses of power that he said are rooted in a sense of entitlement, domination and arrogance over others.

Referring to Floyd by name, Pope Francis said: "Abuse is a gross violation of human dignity that we cannot allow and which we must continue to struggle against."

But he warned that protests can be manipulated and decried the attempt to erase history by downing statues of U.S. Confederate leaders. A better way, he said, is to debate the past through dialogue.

"Amputating history can make us lose our memory, which is one of the few remedies we have against repeating the mistakes of the past," he wrote.

Turning to the pandemic, Pope Francis blasted people who protested anti-virus restrictions "as if measures that governments must impose for the good of their people constitute some kind of political assault on autonomy or personal freedom!"

He accused some in the church and Catholic media of being part of the problem.

"You'll never find such people protesting the death of George Floyd, or joining a demonstration because there are shantytowns where children lack water or education," he wrote. "They turned into a cultural battle what was in truth an effort to ensure the protection of life."

In urging the world to use the pandemic as an opportunity for a reset, Pope Francis offers "three [covid-19]" moments, or personal crises of his own life, that gave him the chance to stop, think and change course.

The first was the respiratory infection that nearly killed him when he was 21 and in his second year at the Buenos Aires diocesan seminary. After being saved, Pope Francis decided to join the Jesuit religious order.

"I have a sense of how people with the coronavirus feel as they struggle to breathe on ventilators," Pope Francis wrote.

The second covid-19 moment was when he moved to Germany in 1986 to work on his thesis and felt such loneliness and isolation he moved back to Argentina without finishing it.

The third moment occurred during the nearly two years he spent in exile in Cordoba, northern Argentina, as penance for his authoritarian-laced reign as head of the Jesuit order in the country.

"I'm sure I did a few good things, but I could be very harsh. In Cordoba, they made me pay, and they were right to do so," he wrote.

But he also revealed that while in Cordoba he read a 37-volume of the "History of the Popes."

"Once you know that papal history, there's not that much that goes on in the Vatican Curia and the church today that can shock you," he wrote.

Pope Francis repeated his call for a universal basic income, for welcoming migrants and for what he calls the three L's that everyone needs: land, lodging and labor.

"We need to set goals for our business sector that -- without denying its importance -- look beyond shareholder value to other kinds of values that save us all: community, nature and meaningful work," he wrote.

CORRECTION: Biographer Austen Ivereigh collaborated with Pope Francis on the latter’s new book. The Associated Press incorrectly stated the authorship of the book in an earlier version of this story. 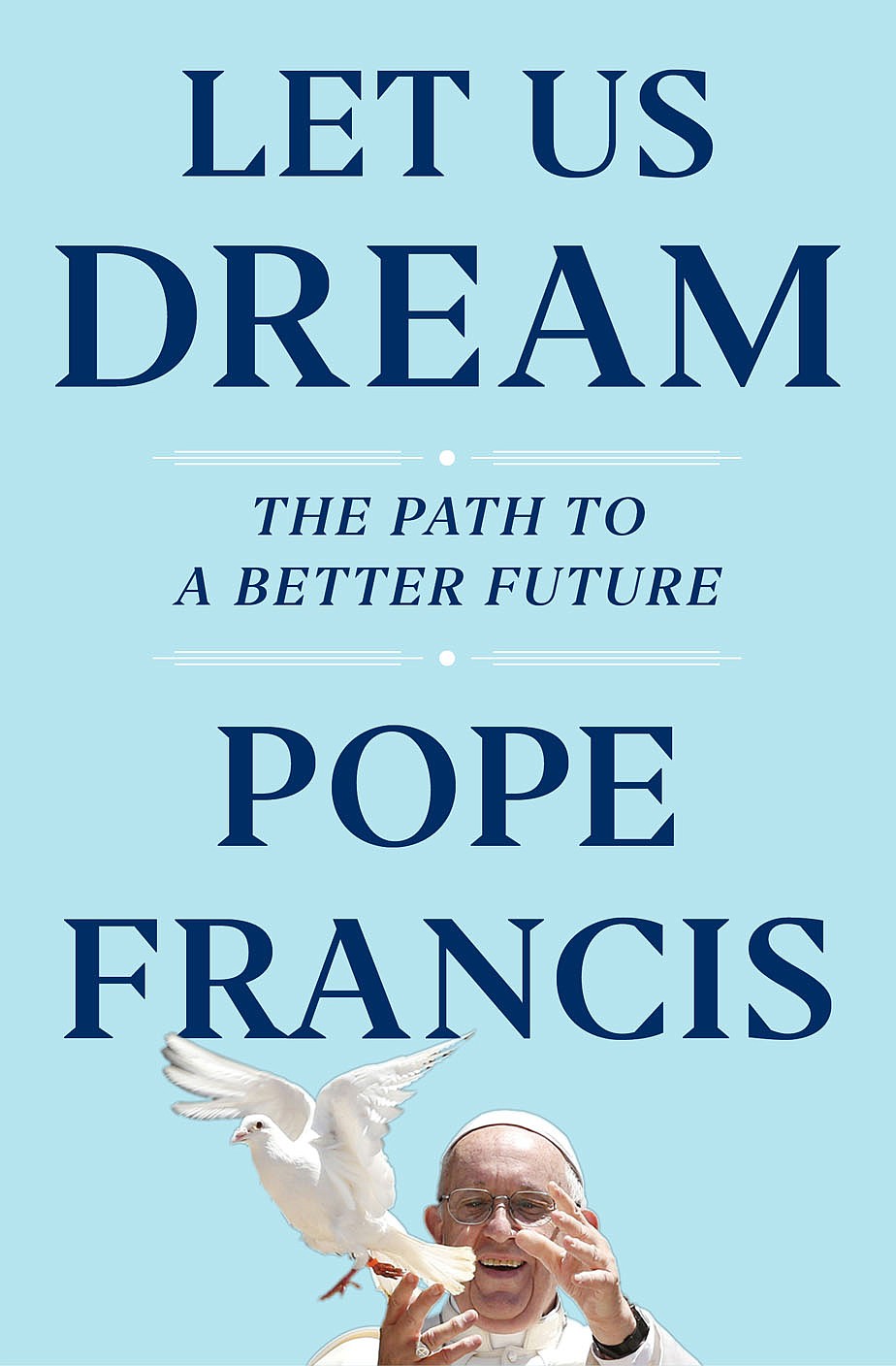 The cover of “Let us Dream,” the book, due out Tuesday. Pope Francis is supporting demands for racial justice in the wake of the U.S. police killing of George Floyd and is blasting coronavirus skeptics and the media that spread their conspiracies in a new book penned during the Vatican’s coronavirus lockdown. In “Let Us Dream,” Francis also criticizes politicians who whip up rallies in ways reminiscent of the 1930s, and the “rigid” conservative Catholics who support them. (Simon & Schuster via AP)
ADVERTISEMENT