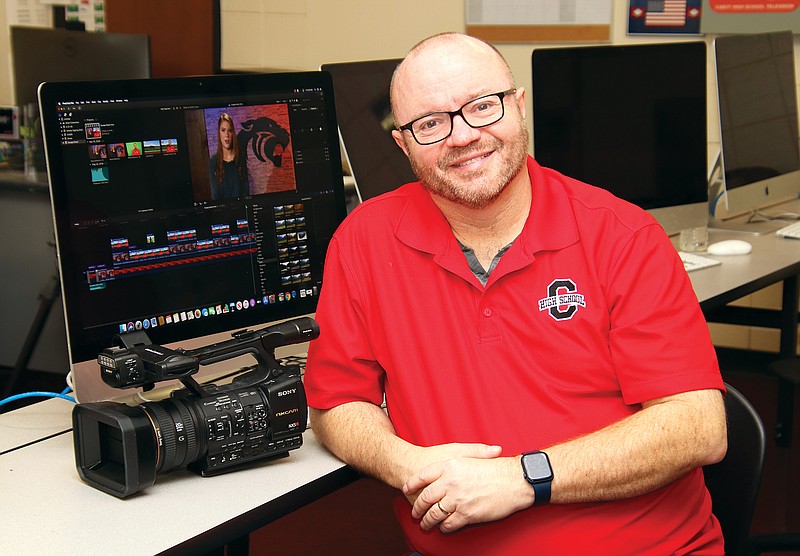 Chuck Massey was recently named the Ozark Media Arts Festival Teacher of the Year. Massey, who has been with the Cabot School District for more than 30 years, is set to retire in December.

When Cabot High School added a video board to its football stadium in 2005, Chuck Massey was the most qualified person to help run the operation.

“When we purchased the board, there was some training that was included, but I have a knack for electronics and gadgets — I am very skilled at that,” Massey said. “I used to build personal computers all the time, and I am very knowledgeable about audio and video gear.

“Don’t ask me to fix your car, unless it’s an oil change, but electronics, I am pretty good at that.”

Massey later earned his teaching credentials for television production and broadcast journalism, and for the 2008-2009 school year, he began teaching in the program full time because his broadcasting class grew to be so popular, with more than 125 students enrolled.

Now, more than 10 years later, Massey is being recognized for not only the dedication and work he has put into the program, but also his students. Massey was recently named the Ozark Media Arts Festival Teacher of the Year.

“To be recognized for the hard work that the students have put in as well — it means a lot,” he said.

Massey said his broadcasting department has its own channel, streams all of the football games, thanks to a full crew, and a daily show is produced at the high school. He said the department also serves the community as well, including assisting in projects for the Cabot Chamber of Commerce, as well as other activities for the school district.

Jake Pendergist, who graduated from Cabot in 2007, said he will never forget that while eating at McDonald’s, Massey told him he was starting up a broadcasting class at Cabot and wanted Pendergist to be among his first students.

“It was an honor to be in the small handful of selected students that would lay the foundation for a program that has quickly become recognized as the premier high school broadcasting program in the state of Arkansas,” said Pendergist, who has since held multiple positions at television news stations, and in sports and public broadcasting. “All of that became reality through Chuck’s dedication to his students, ensuring that they were afforded the absolute best in both technology and opportunities to succeed and thrive.

“The hundreds of hours he’s given to the Cabot School District will last for generations to come.”

Tony Thurman, superintendent for the Cabot Public Schools, said Massey has been an integral part of building the Cabot High School Broadcasting Department into the award-winning program it is today.

“A number of students who graduated from his program have achieved great success in the business,” Thurman said. “In fact, many of his former students can be found in front of and behind the cameras at several television stations across our state.

“That is why it is no surprise that Mr. Massey would be honored with such a prestigious title as [Ozark Media Arts Festival] Teacher of the Year. It is a fitting tribute as Mr. Massey prepares to retire after a distinguished career in education.

“We are proud of all his accomplishments.”

Massey plans to retire in December after being with the district for more than 30 years.

“I don’t know yet what I’m going to do [once I retire],” Massey said. “I know I am going to take a little break, but I don’t know what the future holds.

“I am kind of excited to see what happens. I am always excited about a new adventure.”

Rachelle Nichols, a teacher at Springdale High School, was one of the people who nominated Massey for the award. She said she has known him for about 15 years.

“His passion and compassion for his students are incredible,” Nichols said. “He is always pushing boundaries to make sure the students in his program are getting the most out of their broadcast education.

“This year, he is retiring, and I have no doubt that we all feel that loss. I also know that Chuck is going to miss it like crazy.”

She said nominating Massey was just a way to celebrate the brilliancy he brings to career technical education and to tell him thank you.

Nicole Gatewood, the CTE coordinator for the Cabot School District, said Massey is one of the most talented people she has ever met.

“He has a passion for teaching and sharing his talents in the television-broadcast production realm with students of all ages,” Gatewood said. “He is an integral part of the CHS staff and is appreciated and respected far more than he will ever know.

“Mr. Massey has a can-do attitude and a creative spirit that makes others want to be part of whatever creative project he is working on. He has that charisma and personality type that put others at ease and bring out the best in them.”

Gatewood said that for Massey to be nominated and honored by his peers across the state is a wonderful way to recognize his contributions to this team of amazingly creative educators and production specialists.

Henry Hawkins, the principal at Cabot High School, said Massey is great with his broadcasting kids.

“Mr. Massey is hands-on and interacts well with them,” Hawkins said. “We will miss him.”

Massey graduated from Cabot High School in 1983 and has bachelor’s and master’s degrees in music education from the University of Central Arkansas in Conway. He has spent his entire career at Cabot, minus the year he taught at Devalls Bluff High School.

“While I was at Devalls Bluff, I learned a lot about myself and the teaching profession,” Massey said. “It is a smaller town and was a good place to get my feet on the ground.

“It was never my goal to be there. I just needed a job, and I interviewed and got it. The fortunate thing, when the Cabot job came open, at that time, the assistant superintendent who interviewed me had been my sixth-grade teacher at Cabot.

“I fell in love with this job. I loved it, and I didn’t have any reason to leave Cabot. The experience at Cabot has been good — we have a great administration who has been supportive.

“I had no reason to ever leave. I could have easily taken a job in Conway or Little Rock, but I didn’t have a desire to leave Cabot.”