In interview, he raises suspicion FBI aided Biden victory by Compiled by Democrat-Gazette Staff From Wire Reports | November 30, 2020 at 8:55 a.m. 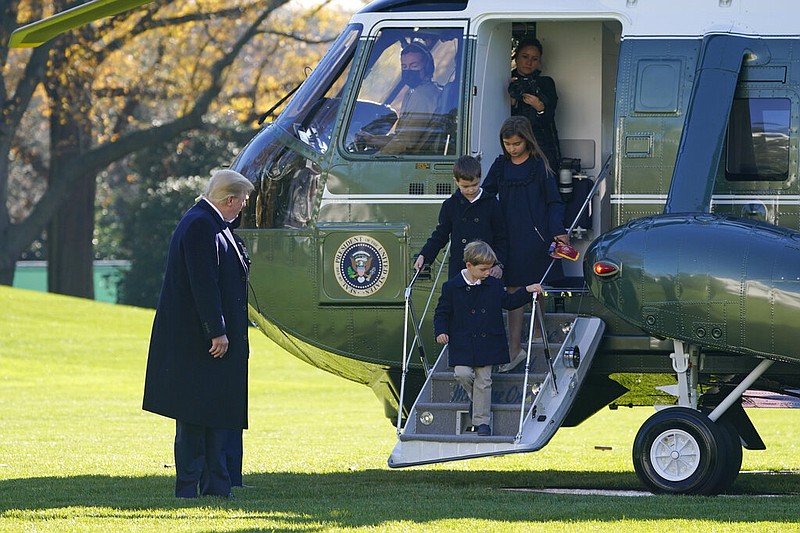 President Donald Trump watches as his grandchildren, Theodore Kushner, Joseph Kushner and Arabella Kushner, step off Marine One on the South Lawn of the White House in Washington on Sunday, Nov. 29, 2020. Trump returned from Camp David on Sunday with his daughter and son-in-law, Ivanka Trump and Jared Kushner, and their children. (AP / Patrick Semansky )

WASHINGTON -- President Donald Trump said Sunday that the FBI and the Justice Department might be "involved" in what he again called a fraudulent presidential election, hinting that the nation's law enforcement agencies were biased against his efforts to remain in office.

"This is total fraud. And how the FBI and Department of Justice -- I don't know, maybe they're involved -- but how people are allowed to get away with this stuff is unbelievable. This election was a total fraud," Trump told host Maria Bartiromo by telephone on Fox News Channel's "Sunday Morning Futures."

"Missing in action. Can't tell you where they are," Trump said. "I ask, 'Are they looking at it?' Everyone says, 'Yes, they're looking at it.'

"These people have been there a long time," he added. "Some of them have served a lot of different presidents."

Trump's roughly 45-minute conversation with Bartiromo, who has been sympathetic to his charges, was his first one-on-one interview since his election defeat to President-elect Joe Biden.

No significant evidence has been found to support the president's claims, and several judges in multiple states have quickly dismissed lawsuits by his legal team alleging fraud.

Trump complained that the media had not taken his fraud claims more seriously and alleged that foreign leaders had expressed sympathy for his plight.

"You have leaders of countries that call me, say, 'That's the most messed-up election we've ever seen,'" Trump claimed. But no foreign leader has endorsed Trump's claims about the election, and dozens have offered both public and private congratulations to Biden.

With several important federal deadlines coming up for the election process, including a Dec. 8 deadline for states to resolve all election disputes, Trump declined to say when his time fighting the results would be up. "I'm not going to say a date," Trump said.

Asked whether he would appoint a special counsel to investigate the election, Trump said that he "would consider" doing so.

Trump acknowledged that the fight to overturn his reelection defeat "probably" won't reach the Supreme Court, which had been the goal of his legal team.

"It's very hard to get a case to the Supreme Court," Trump told Bartiromo. "I probably can't get a case."

The president signaled that his legal options may be running out, but suggested there was no "drop-dead" date for his challenges to finally come to an end.

[Video not showing up above? Click here to watch » https://www.youtube.com/watch?v=OB7-m7Y08Ho]

Trump's legal team has suffered a series of setbacks in a longshot bid to challenge election results. The strategy has relied on recounts in several states that so far haven't helped him, legal cases that have nearly all been dismissed, and appeals to state lawmakers to overrule the popular vote.

"I've got the best Supreme Court advocates, lawyers, that want to argue the case if it gets there, but they said it's very hard to get a case up there," Trump said.

Trump's legal team has shrugged off legal failures by saying it's all part of a march to the Supreme Court. The court has a 6-3 conservative majority and three justices appointed by Trump -- the latest, Amy Coney Barrett, was confirmed by the Senate in October.

But Trump has been rebuffed in the lower courts, in part because his campaign's lawsuits haven't backed up his out-of-court claims of widespread fraud.

One of Trump's legal advisers, Jenna Ellis, said as recently as Friday that they were headed to the top court after their latest setback in Pennsylvania.

Trump's interview came amid continued pushback against his claims.

Christopher Krebs, the former government official who had overseen cybersecurity efforts for the 2020 election, reaffirmed his confidence in the integrity of the vote and called Trump's unfounded allegations of voter fraud "farcical."

"The American people should have 100% confidence in their vote," Krebs said in an excerpt from a "60 Minutes" interview that aired Sunday night. "The proof is in the ballots. The recounts are consistent with the initial count, and to me, that's further evidence. That's further confirmation."

Sen. Roy Blunt, R-Mo., a member of the GOP leadership, also said he did not think the election was rigged.

"I don't think it was rigged," Blunt said on CNN's "State of the Union." "I think there was some element of voter fraud as there is in any election. I don't have any reason to believe the numbers are there that would have made that difference."

Blunt's comments came as an increasing number of Republican lawmakers have begun to acknowledge Biden's victory. But many, including the party's leaders, still refuse to do so.

Blunt, who leads the Senate committee responsible for overseeing the presidential inauguration, also said it was likely that there would be fewer attendees at the event this year and that it was also likely that attendees would be required to wear masks.

Ahead of the Jan. 5 Senate runoff elections in Georgia -- which will determine which party controls the chamber -- Trump also renewed his criticism of Republican officials in the state, including Gov. Brian Kemp and Secretary of State Brad Raffensperger, for not supporting his claims.

Trump said on Fox News that Kemp has "done absolutely nothing" to question the state's results. Trump backed Kemp's campaign in 2018, boasting that his "full endorsement" helped him edge rising Democrat Stacey Abrams.

Democrats are hoping for two other upset victories in twin Senate runoff elections against Republican office holders, keeping the GOP with 50 Senate seats, while Vice President-elect Kamala Harris would be available for tie-breaking votes.

Democrat Jon Ossoff is challenging Sen. David Perdue while the Rev. Raphael Warnock takes on Sen. Kelly Loeffler. No candidate won at least 50% of the vote share in this month's election, leading to the head-to-head runoffs.

Ossoff said Sunday that a Republican-controlled Senate will hit the Biden administration with the same "obstructionism" it mounted against former President Barack Obama.

"It will be paralysis, partisan trench warfare," he told CNN. "At a moment of crisis, when we need strong action."

Loeffler on Fox News said GOP victories would be a "firewall to socialism" and the Democratic policies of Senate Minority Leader Charles Schumer. It is Loeffler's first election cycle after Kemp appointed her to the seat in January when her predecessor resigned.

Trump on Saturday plans to arrive in the state he lost to campaign for the GOP incumbents.

"We're making sure that Georgians are fired up to turn out to vote," Loeffler said. "If we vote, we will win this election."

Speaking to reporters while casting a ballot in municipal races, he also echoed Trump's allegations of irregularities in the U.S. vote.

"I have my sources of information that there really was a lot of fraud there," he said. "Nobody talks about that. If it was enough to define [victory] for one or the other, I don't know."

Asked if he would recognize Biden's victory, he said, "I am holding back a little more."

He also expressed doubts about Brazil's current electronic voting system, which he has suggested is vulnerable to fraud. He has urged the country to go back to a paper ballot system for the 2022 presidential election.

The conservative Brazilian leader has appealed to the same sort of right-wing populist base in Brazil that Trump has courted in the United States, and has welcomed comparisons to the U.S. president.

Information for this article was contributed by Michael Crowley, Catie Edmondson and Christopher Cameron of The New York Times; by Felicia Sonmez and Colby Itkowitz of The Washington Post; by Cuneyt Dil and staff members of The Associated Press; and by Josh Wingrove of Bloomberg News.