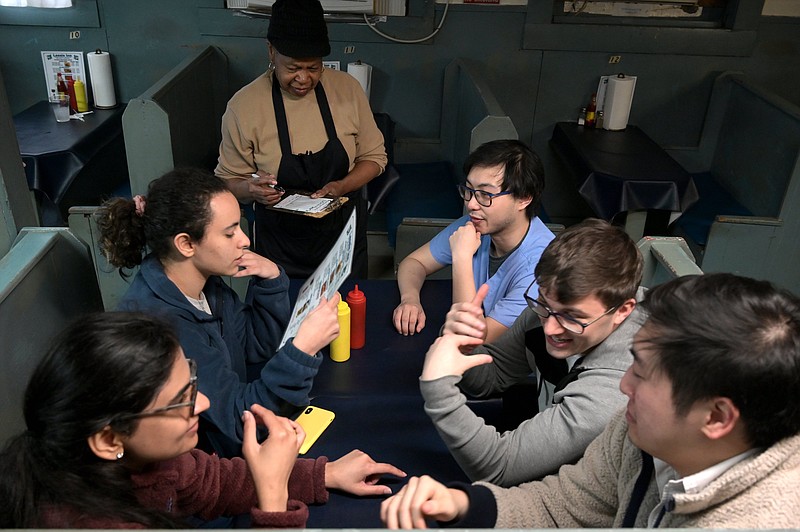 Lassis Inn co-owner Maria Washington takes an order in February, just after the James Beard Foundation announced it had named the restaurant as a recipient of its 2020 America’s Classics Award. (Arkansas Democrat-Gazette/Stephen Swofford)

Little Rock's Lassis Inn owners Elihue Washington Jr. and Maria Washington accepted an "America's Classics" Award from the James Beard Foundation Friday during a broadcast via Twitter from Chicago. The award had been announced in February; the ceremony was postponed from March and ended up online last week because of the covid-19 crisis.

Though several Arkansas chefs have been nominated, this is only the second Arkansas establishment to receive a Beard Award; James Harold Jones' Jones Bar-B-Que in Marianna was the first, receiving the same honor in 2012.

The Lassis Inn, founded around 1905 by Joe and (namesake) Molassis Watson, has been in pretty much the same location, 518 E. 27th St., since 1931, except that a short move in the 1960s made a little extra room for the construction of Interstate 30.

The other American Classics winners:

The foundation decided not to give awards in the remaining Restaurant & Chef categories this year, but the broadcast still recognized finalists and their accomplishments. Visit jamesbeard.org/awards. 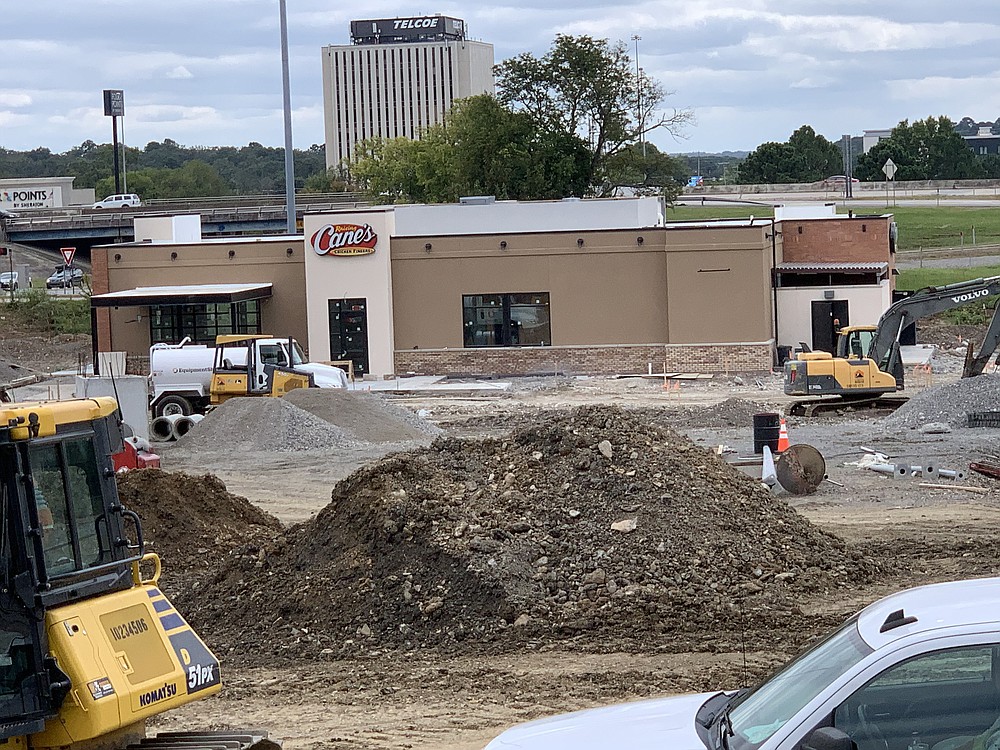 That fast-food-looking restaurant that’s been rising at University Avenue and Interstate 630 in Little Rock is, in fact, a Raising Cane’s. (Arkansas Democrat-Gazette/Eric E. Harrison)

We can now confirm that the fast-food restaurant rising up in the District at Midtown, a restaurant and hotel project under construction at University Avenue and Interstate 630 is, in fact, a Raising Cane's Chicken Fingers. How do we know, when it hasn't yet shown up on the corporate website (raisingcanes.com/locations)? The signs on the building are, well, kind of a dead giveaway. There are outlets around the state but the only other one in Central Arkansas is at 4311 E. McCain Blvd., North Little Rock.

Trio's, 8201 Cantrell Road, Little Rock, was to have reopened for dine-in service Wednesday after having been doing curbside takeout only for months. Two dining rooms will mean the restaurant can "carefully follow the social distancing guidelines," according to a Facebook post (facebook.com/TriosLR). Hours are 11 a.m.-2 p.m. Monday-Saturday for lunch, 5-8 p.m. Monday-Wednesday and 5-8:30 p.m. Friday-Saturday for dinner. They will continue to offer curbside pickup; delivery will now be through third-party services. The phone number is (501) 221-3330; the website, triosrestaurant.com.

It'll be similar to what takes place on Main Street in North Little Rock's Argenta District — the "tent city" in the SoMa neighborhood on Main Street south of Interstate 630 is off-street; LRC&VB folks say they've had to hold off in the River Market because of the Farmers Market, which has ended for the season.

Parking along the two blocks of President Clinton Avenue and in the lot behind the Rev Room will close two hours before the street closures — 4 p.m. Friday, noon Saturday-Sunday. The River Market Deck at Second Street and River Market Avenue and the Central Arkansas Library System deck at Second Street and Ottenheimer Place are open for public parking. And if you're an entertainer looking to busk, email Diana Long to sign up at dlong@littlerock.com, send a message via facebook.com/LittleRockRiverMarket or text (501) 804-1262.

Meanwhile, the Ottenheimer Market Hall, 400 President Clinton Ave., remains closed until further notice. Long says for the moment a couple of the restaurant tenants have found other outlets, while the others are just hunkering down and waiting to see what develops.

El Charro has opened at 1501 Club Manor Drive, Maumelle, in the space that most recently held a Chinese restaurant called Great Wall. The Facebook page (facebook.com/ElCharroMaumelle) lists the phone number as (501) 271-5137, but nobody answered it during lunchtime as our deadline loomed, so we don't yet have their hours. We do have the menu, however — visit elcharromaumelle.com and click on the menu cover. 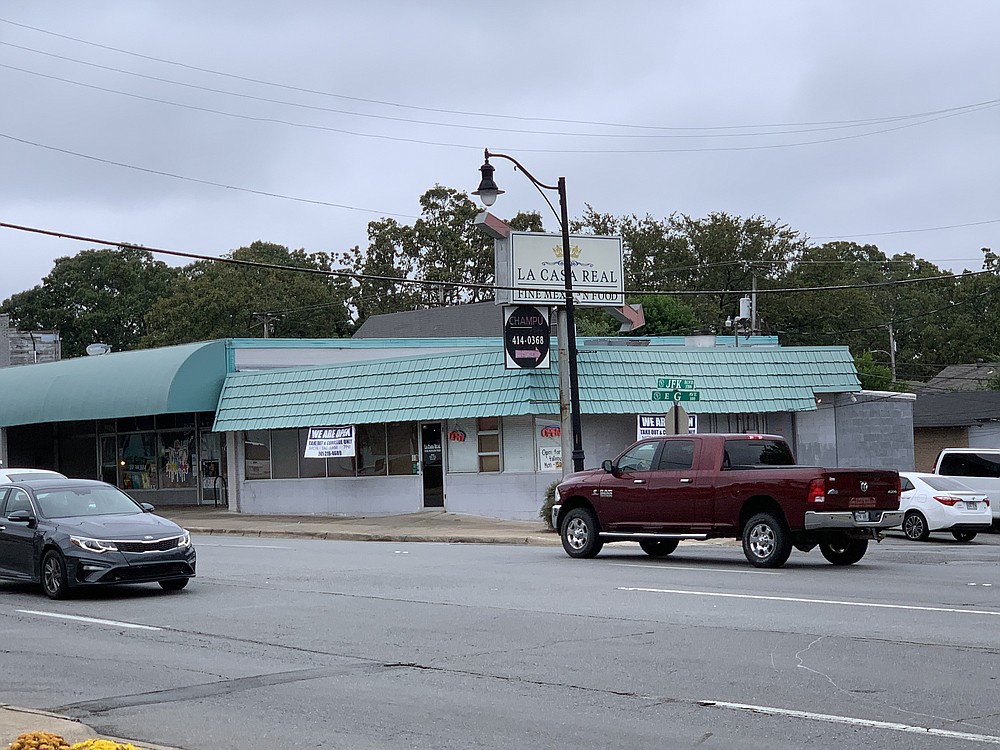 And speaking of Mexican restaurants north of the river, La Casa Real, 3700 John F. Kennedy Blvd., North Little Rock, at the pinnacle of Park Hill, has been open for about a month and a half for takeout. Hours are 11 a.m.-7 p.m. Monday-Saturday; when they eventually open for dine-in service, they'll stay open until 8. The phone number is (501) 219-4689.