Arkansas' general-revenue tax collections in September dropped by $3.1 million from what was received in the same month a year ago to $661.5 million, but beat the state's April 2 forecast for the month by $73.7 million.

Sales and use tax collections increased by 10.4% from the same month a year ago, while individual tax revenue declined by 5.3% compared with a year ago, the state Department of Finance and Administration reported Friday in its monthly revenue report.

Individual income and sales and use taxes are state government's two largest sources of general revenue. General-revenue collections help fund programs such as the public schools, the Medicaid program, colleges and universities and prisons.

The record collection for the month of September continues to be the $664.5 million collected in 2019, said Whitney McLaughlin, a tax analyst at the finance department.

"The revenue report shows another month of encouraging news with a $158 million surplus at the end of the 1st quarter of the fiscal year," Gov. Asa Hutchinson said in a written statement.

September is the third month of fiscal 2021, which started July 1.

Hutchinson said the "challenge we face is that the pandemic continues to undermine a complete economic recovery.

"Jobs are coming back and consumer confidence is growing, but the hospitality sector of our economy and some manufacturing will take longer to rebuild," the Republican governor said in his written statement.

"For that reason, any change to the forecast for this fiscal year will depend upon our budget numbers over the next few months and the needs of our state agencies," Hutchinson said.

"There is no plan to change the forecast at this time. My goal has always been to reduce the state individual income tax rate. However, our next step in income tax reduction will depend upon the economic outlook in the next few months," the governor said.

In the fiscal legislative session in April, the Legislature enacted a $5.89 billion general revenue budget for fiscal 2021.

The finance department's April 2 forecast will provide $5.68 billion for the fiscal 2021 budget and leave $212.2 million unfunded. On April 2, the department trimmed its original forecast by $205.9 million, citing a projected recession triggered by the coronavirus pandemic.

According to the finance department, September's general revenue included:

Withholding is the largest category of individual income taxes.

Withholding collections declined by $35.4 million from a year ago to $201.5 million, but beat the forecast by $13.6 million.

Estimated individual tax payments last month increased by $9.9 million over a year ago to $98.8 million and outdistanced the state's forecast by $25 million.

"Apparently the law or the rule is you have to pay [90%] of what you paid last year and, if there has been a reduction in their income, it will manifest next year when they file their taxes and true everything up in April," said finance department Secretary Larry Walther.

Collections from tax returns and extensions in September increased by $7.7 million over a year ago to $19.7 million, which beat the forecast by $9.4 million.

Monthly changes in tobacco collections can be attributed to uneven patterns of stamp sales to wholesale purchasers.

The Legislative Council and Joint Budget Committee will hold budget hearings starting Oct. 13 through Nov. 12 in advance of the regular legislative session that starts Jan. 11. In that regular session, the Legislature will determine the budget for fiscal 2022, which starts July 1.

The governor's proposed budget for fiscal 2022 will be presented to lawmakers Nov. 10, said Scott Hardin, a spokesman for the finance department.

Enrollment in the state's total Medicaid program, including the Medicaid expansion called Arkansas Works, has grown throughout the pandemic according to Department of Human Services' figures. Arkansas' first positive coronavirus case was announced March 11.

Because of the public-health emergency resulting from the coronavirus pandemic, the Medicaid program's finances have been assisted by the federal government increasing the match rate for the traditional Medicaid program by 6.2 percentage points, retroactive to Jan. 1, to 77.62%. The federal government covers 90% of the cost of the Medicaid expansion program, while the state picks up 10% of that cost. 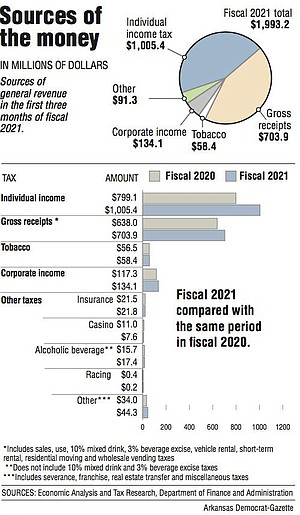