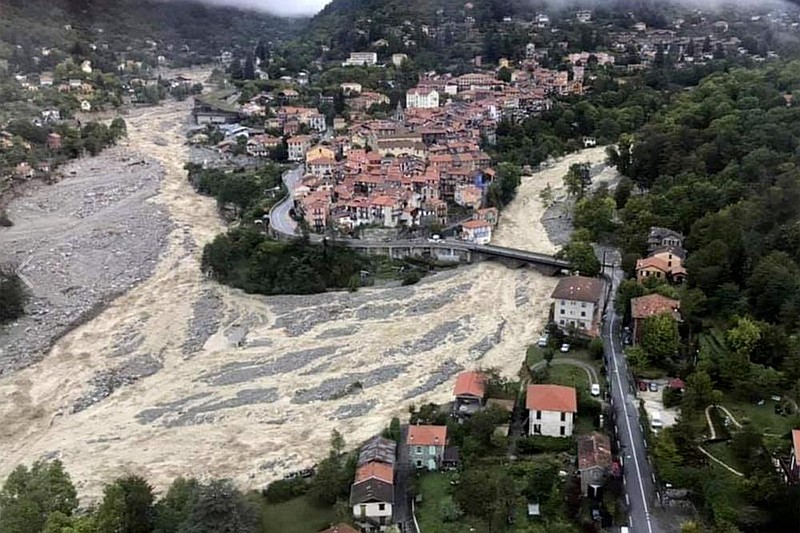 Flooding is shown near La Vesubie in southern France in this photo provided Sunday by the Alpes Maritimes region fire brigade. (AP)

PARIS -- French authorities deployed about 1,000 firefighters, four military helicopters and troops to search for at least eight people who were missing after devastating floods hit a mountainous border region with Italy, where at least four people were killed.

Emergency workers in Italy recovered two bodies Sunday in northern Liguria that they feared may have been washed away as a result of the storms that killed two other people Saturday.

Floods washed away houses and destroyed roads and bridges surrounding the city of Nice on the French Riviera after almost a year's average rainfall fell in less than 12 hours. Nice Mayor Christian Estrosi said more than 100 homes were destroyed or severely damaged.

Rescuers were also providing emergency assistance, including food and water, to residents of isolated villages.

The missing include two French firefighters whose vehicle was carried away by a torrent when a road collapsed south of the village of Saint-Martin-Vesubie. Authorities fear more victims, as many families couldn't reach out to relatives due to cellphone service being down.

French Prime Minister Jean Castex, who flew over the area in a helicopter, expressed "grave concern" over the toll of the flooding.

The storm came ashore near Tulum with maximum sustained winds of nearly 70 mph -- 4 mph short of hurricane force, according to the U.S. National Hurricane Center in Miami. By night, winds had dipped to 60 mph.

Forecasters said the biggest threat to the area, which recently reopened to tourism after a pandemic shutdown, was probably the torrential rain and possible flooding, with as much as 10 to 15 inches of rain possible over the northeastern part of the peninsula.

The state's tourism department reported on Twitter that more than 41,000 tourists were in Quintana Roo, with hotels in Cancun and Cozumel at more than 30% occupancy. Social media accounts of the state government showed police removing people from vulnerable shacks and removing downed trees.

The storm was projected to emerge from the northern edge of the Yucatan on Sunday and then curve toward the west-southwest into the lower Gulf of Mexico, flinging heavy rains across a large part of southern Mexico and Central America.

HELSINKI -- The United States and Russia today will hold nuclear arms control talks in Finland's capital, Helsinki, to follow up on negotiations in Austria this summer, the Finnish president's office said.

"The round of discussions on strategic stability and nuclear weapons between the United States and Russia, which began in Vienna in the summer, will continue in Helsinki on Monday," the office of the Finnish President Sauli Niinisto said in a brief statement late Sunday.

The office said negotiators from Washington and Moscow met a previous time in Finland in 2017.

"Finland welcomes the negotiators, this time [U.S.] Ambassador [Marshall] Billingslea and [Russian] Deputy Foreign Minister [Sergei] Ryabkov," the statement said, adding that Niinisto would meet both representatives after the talks.

The talks are aimed at producing an agreement to replace the New START treaty that expires in February -- the last remaining pact constraining the arsenals of the world's two major nuclear powers.

SANTIAGO, Chile -- Authorities in Chile have arrested a police officer who allegedly threw a teenager from a bridge into a riverbed during a protest.

The 16-year-old boy was in stable condition with head trauma and a wrist fracture in Santiago, Chile's capital, on Friday. Dozens of people protested Saturday outside the clinic where he is being treated, condemning police and carrying signs that said: "He did not fall, they threw him."

The incident raised more concerns about police conduct since protests about a wide range of social and economic problems broke out in Chile a year ago. Some 31 people have died in the unrest, and numerous allegations of human-rights violations were filed against police.

The North Central Prosecutor's Office of Santiago accused the police officer of "causing" the youth to fall and said attempted murder charges would be filed Sunday.

However, Enrique Monras, chief of police in Santiago's western area, said the youth had lost his balance and fallen over the bridge railing after the police attempted to arrest him. Ambulances were summoned so they could provide prompt assistance, Monras said.

The government said in a statement that it condemns any violation of human rights. It said a police officer who "does not comply with the protocols or the law" must be investigated and tried in the courts.