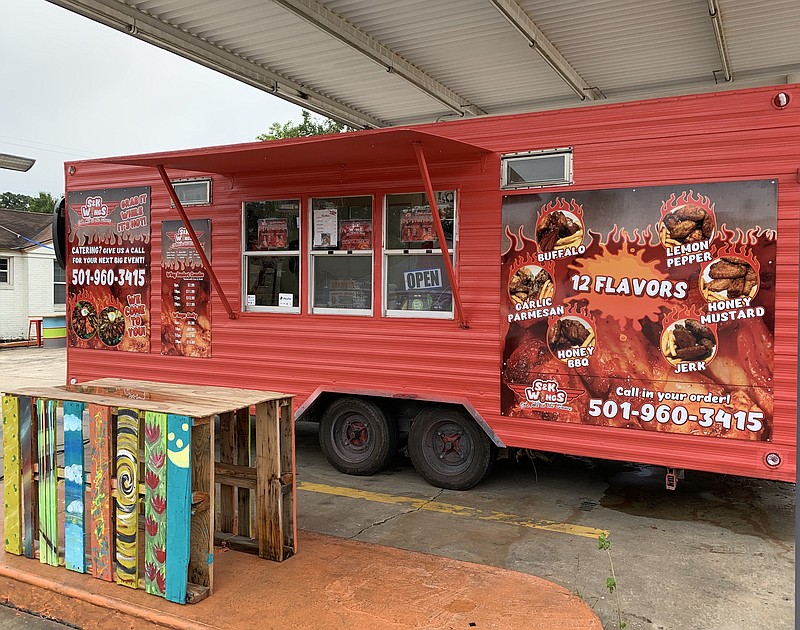 Our reports on on-the-fly dining in past weeks have included food-truck fodder, but this week, we’ve decided to place our focus entirely on food trucks.

Our original game plan was to scour the area for some of the top traveling tavernas, but the existence of two food-truck courts, one in Little Rock, one in North Little Rock, made it too easy to sample a range of mobile menus in just a couple of spots.

We placed all our food orders through the food-truck windows, and as per our operating orders, paid for all our meals up front.

We made several visits to The Filling Station Eats & Treats, on the site of a former gas station at 3623 John F. Kennedy Blvd. at G Avenue, near the pinnacle of North Little Rock’s Park Hill. There’s officially space for four food trucks, though we haven’t seen more than three at a time. There are outdoor tables and chairs if you’re interested in consuming your purchase(s) on the spot. There’s also a farmers market in the former garage and inside office areas, where we bought some killer croissants from The Croissanterie, a bakery that supplies farmers markets and some food truck operations with croissants and specialty breads, with its own food-truck based mobile commercial kitchen in the works. 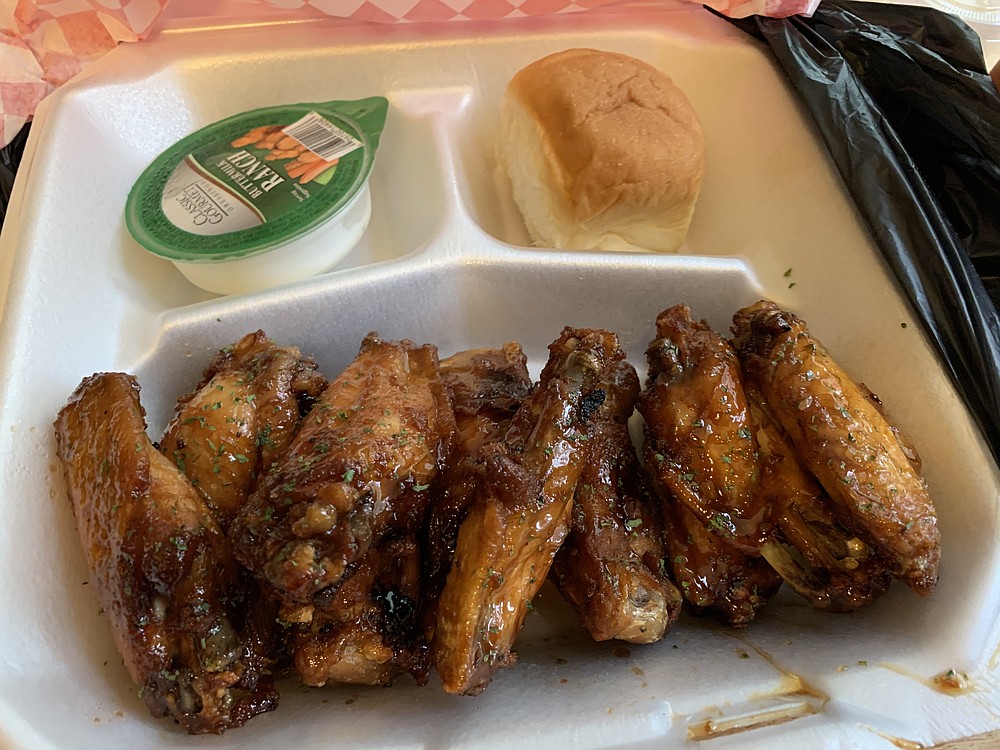 A 10-piece wing order, half teriyaki, half honey BBQ from S&K Wings. (No, we couldn't figure out which was which, either.) (Arkansas Democrat-Gazette/Eric E. Harrison)

S&K’s wings were meaty and tasty and fried up to order. There’s a choice of a dozen sauces; we split our 10 wings, half with teriyaki, half with honey BBQ, but if the kitchen actually did them that way, the two sauces are apparently so similar that we couldn’t tell which was which. Neither sauce, if there were two, was too sweet, so we enjoyed the result regardless.

HOW IT WENT: The nice woman who took our order told us it would take 10 minutes, and that’s what it took. She also gave us a loyalty card — make seven purchases, get a free six-piece wing order.

HOW IT’S GOING: There were several other customers ahead of us and one behind us, some of whom stuck around the truck while they waited their 10 minutes, and some popping back from somewhere else. 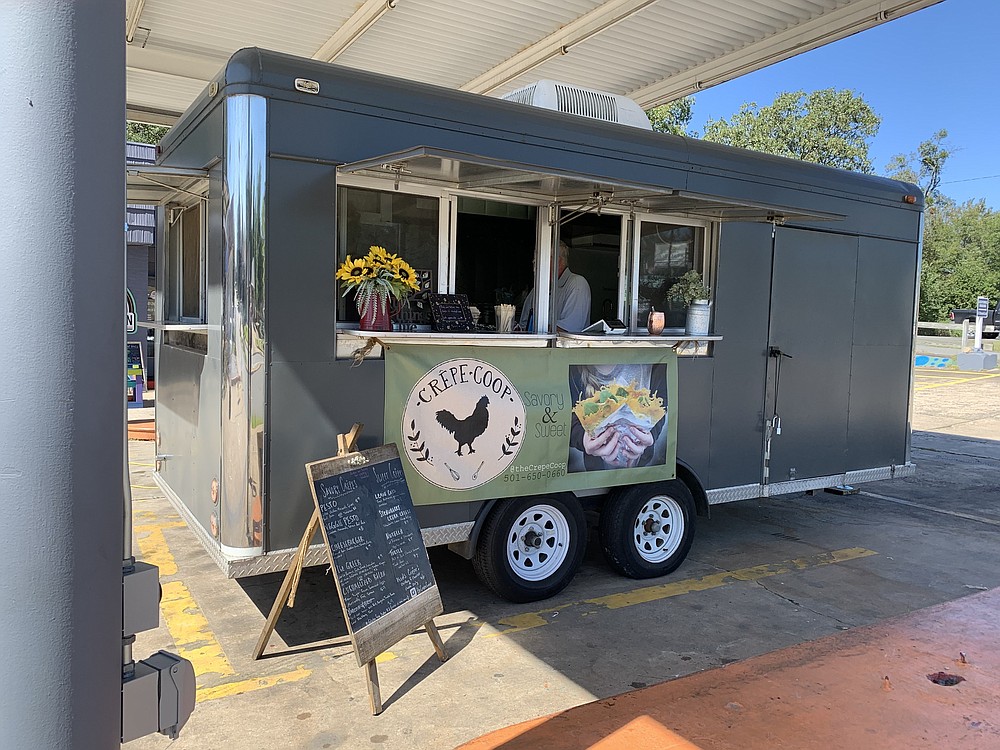 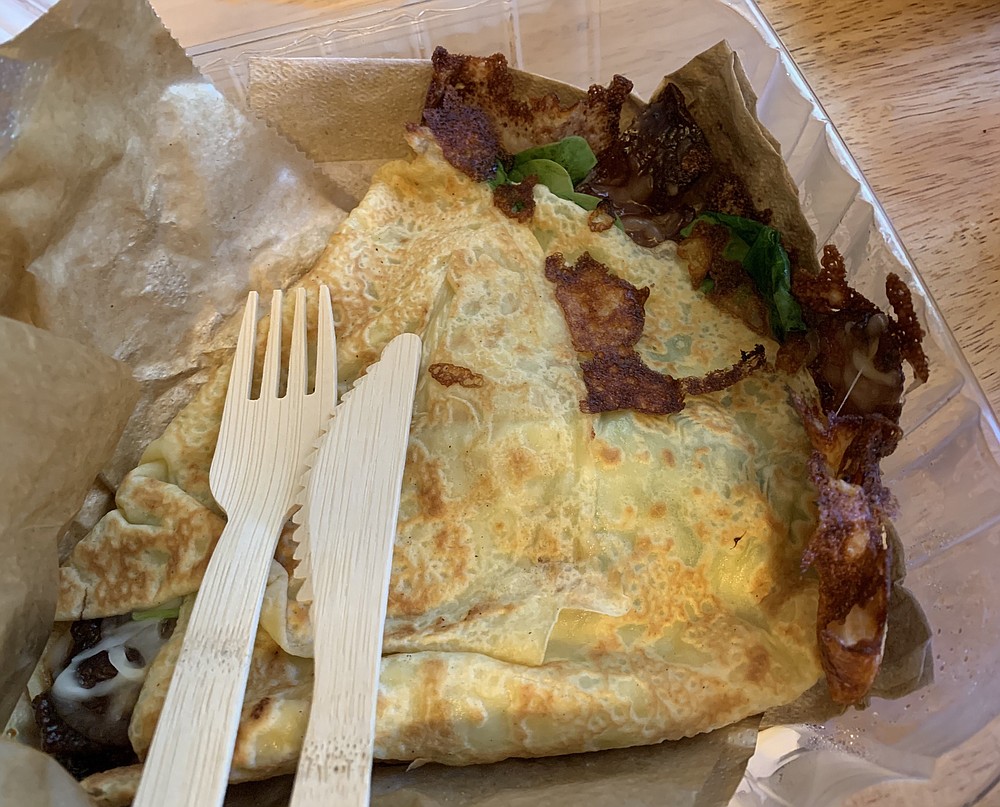 Owner-operator Taylor Fleming, who calls her business Taylor-made Crepes, Taylor-makes her crepes with thin pancake-like wrappers around smoked meats, fresh veggies and house-made sauces. We’ve been meaning for ages to try it, but we couldn’t get anywhere near it during last fall’s most recent downtown Little Rock Food Truck Festival (this year’s festival, alas, has gone with the viral wind).

The menu usually offers five savory crepes, four sweet crepes (all the latter come with whipped cream) and one kid’s crepe. We did very well with what were essentially second choices. The Bacon and Brie, the most interesting of the savory crepes, had a line through it, so we went with the Caramelized Bacon, with brown-sugar bacon, scrambled eggs, mozzarella and fresh baby spinach. We couldn’t inhale it fast enough. Meanwhile, one bite of the fantastic strawberry cream cheese crepe erased any regret we had for not ordering the Nutella crepe (with strawberries or bananas). Oh, yeah, and the utensils are made from wood.

HOW IT WENT: It took about 10 minutes for Fleming to make and package our crepes to go. She also laughed at all our jokes.

HOW IT’S GOING: There was one customer ahead of us in the middle of the midday lunch period; another walked up as we were driving off. 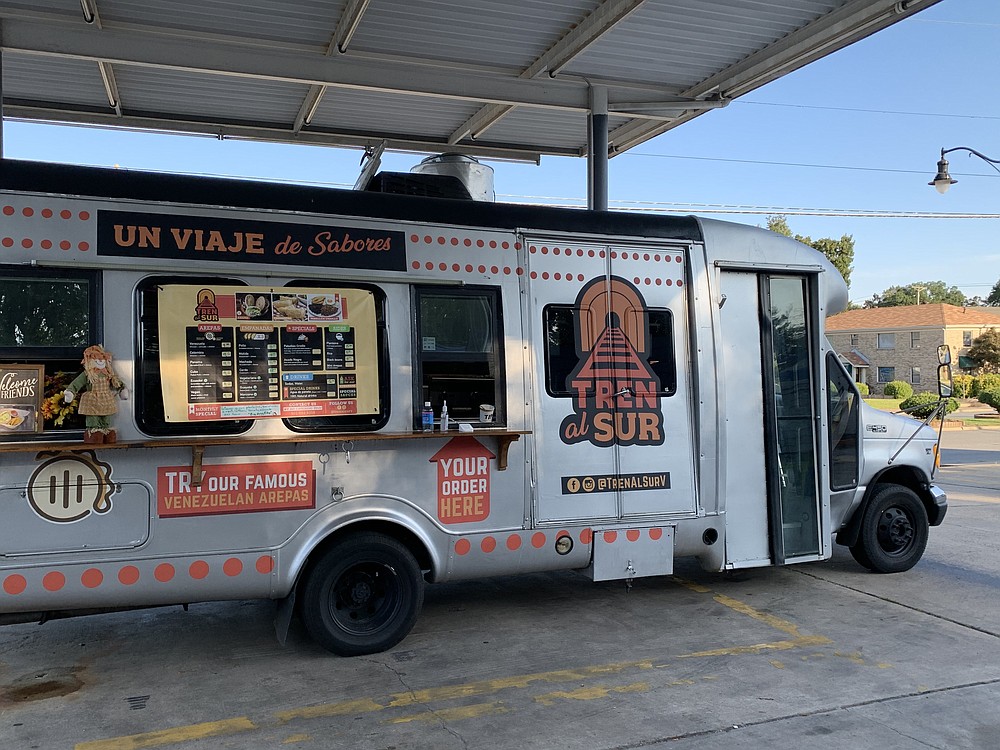 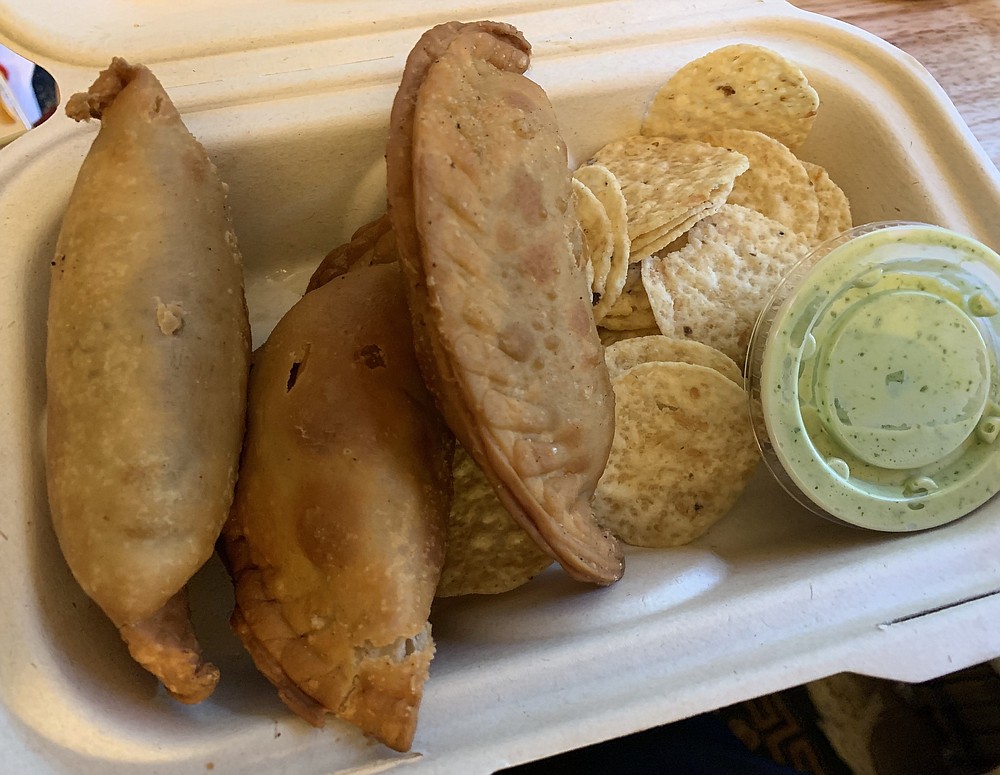 Tren al Sur's empanadas come three to an order, and you can mix and match from among seven options. (Arkansas Democrat-Gazette/Eric E. Harrison)

WHAT WE GOT: Three empanadas ($8); side of fried plantains with cheese ($5)

This is another outfit we’d been trying to sample, and like the Crepe Coop there were long, long lines at the Food Truck Festival, so we didn’t. Tren al Sur bills itself as offering “a fusion of Latin Flavors directly from Venezuela,” according to its Facebook page. So when we got to the truck, we carefully examined its variety of sandwich-like arepas, which includes various combinations of meat and cheese (except for the vegan one, which has black beans and fried plantains) on gluten-free cornmeal buns. But something about the meat-and-cheese-filled empanadas (aka pastelitos, which is what it said on our receipt), three to an order, called louder to us, so we mixed-and-matched one with chicken (Pollo), one with ground beef and cheese (Molida) and one with pulled pork (Cerdo) — and all three were a delight. The deep-fried dough pockets were crisp and so well drained we didn’t have to wipe any oil off our hands, and the fillings of all three were moist and delicious. It came with a pile of tiny corn chips and a little plastic cup of what we believe to be Guasacaca, a pastel green cilantro-avocado condiment, similar, we’re told, to chimichurri, with a slight tongue-tingling kick.

We also just couldn’t pass up the fried sweet plantains with cheese (in Spanish, tajadas con queso), a pile of lightly fried plantains (similar to bananas) with a pile of shredded mozzarella-like cheese. It’s a combination you wouldn’t think would work, but it does; we put some bites of plantain and some cheese on the same fork and went to town.

HOW IT WENT: It took about 10 minutes to complete our order. Oh, and speaking of forks, Tren al Sur hands out packets of compostable plastic cutlery in a little compostable plastic sack; our orders came in compostable, environment-friendly paper-board clamshells; the one with the plantains was lined with aluminum foil, which, while not compostable, is at least recyclable.

HOW IT’S GOING: We were the only ones ordering fairly early in the four-hour dinner period the truck was to have parked there.

The Food Truck Stop, at another former gas station at 801 S. Chester St., Little Rock, has been operating for quite some time — right now only for lunch, 11 a.m.-2 p.m. weekdays. We’ve seen eight or nine food trucks on site at one time, though not all of them are open at the same time, and a few of them are regulars, including Luncheria Mexicana Alicia (we profiled their flautas a few weeks ago) and Pon’s Thai Kitchen (where we got an excellent basil stir fry a couple of weeks before that). There’s substantial indoor seating available in the former garage space. 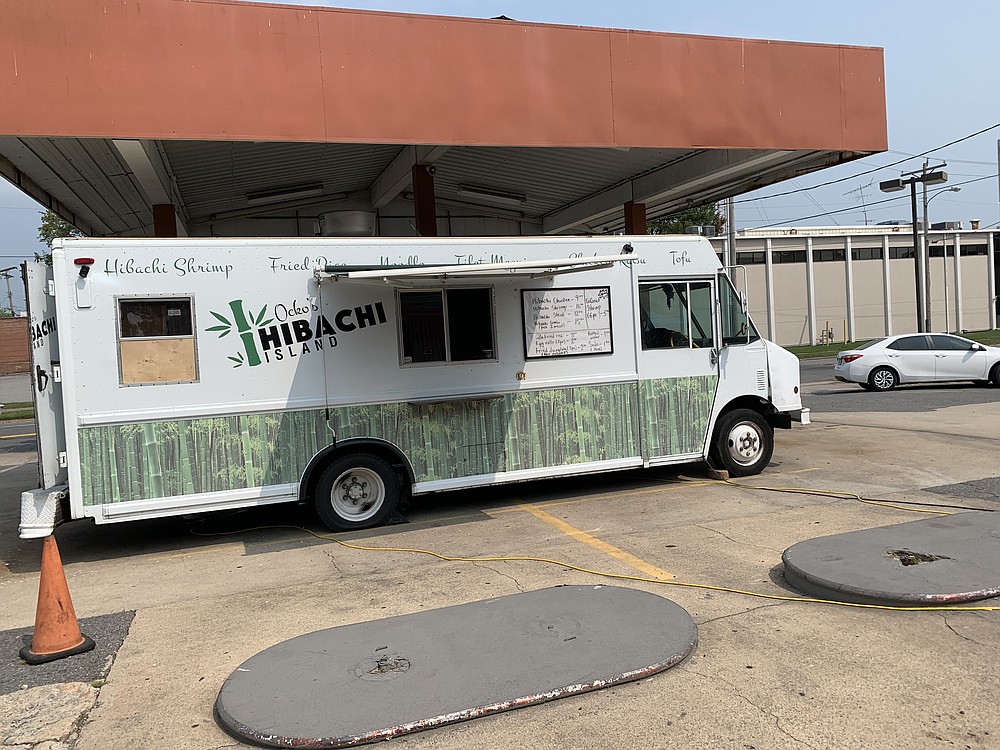 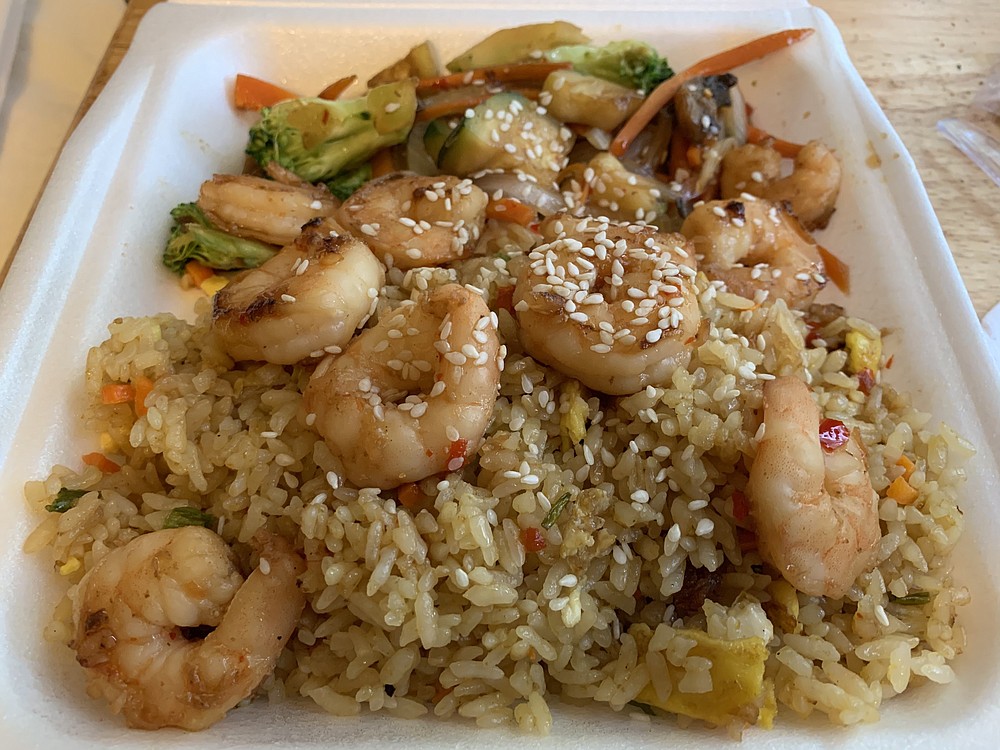 Red pepper flakes provided a tongue tingle for the 10 firm, plump, no-tail shrimp, as well as the pleasantly flavored fried rice and a selection of side veggies in sauce (broccoli, zucchini, mushrooms, shredded carrots and onions), all generously also specked with sesame seeds.

HOW IT WENT: It took just under 10 minutes to prepare our food.

HOW IT’S GOING: There were a couple of other customers in the middle of the lunch period but there was no rush.