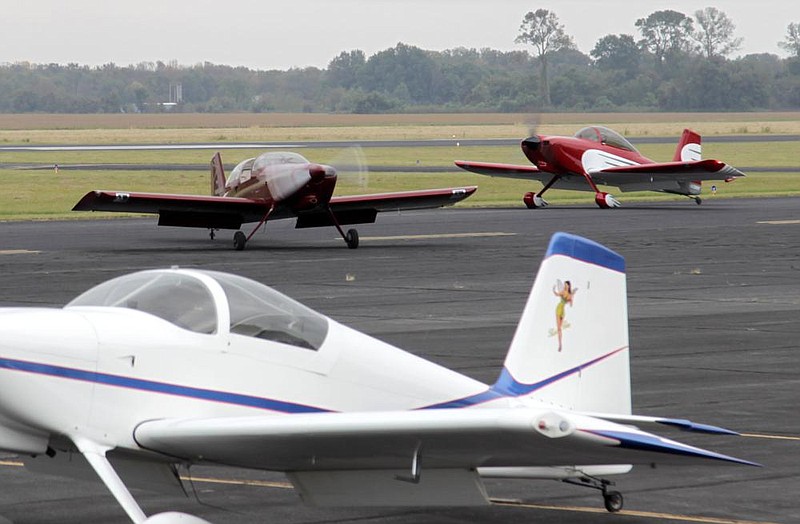 Two of the 22 experimental aircraft fly onto the tarmac next to the Grider Field airfield terminal after morning maneuvers for this weekend’s formation flying clinic taxi. Many of the aircraft were built by the owners, while some were bought from the original owner/builders. The experimental aircraft designation refers to aircraft that are primarily assembled from kits sold directly to the public. More photos at arkansasonline.com/1010pbair/. (Pine Bluff Commercial/Dale Ellis)

The threat of rain failed to dampen the spirits of some 25 or so pilots from around the country who flew in to Pine Bluff's Grider Field for a weekend formation flight clinic, where they would receive instruction on the fundamentals of formation flying.

Some would test for the coveted Federal Aviation Administration Formation Card, a requirement for performing flyovers at sporting events, patriotic celebrations and other occasions.

This year's flight clinic was smaller than in years past, said airport manager Doug Hale, and the number of participants signed up for this year had dropped considerably from the original 80 pilots. Hale said threatening weather blowing in from the Gulf of Mexico had caused a number of cancellations.

"Hurricane Delta is causing some unsettled weather that convinced some pilots to drop out this year," Hale said. "A lot of them have jobs and the iffy weather was creating some uncertainty about whether they would be able to get back home in time after the event ends."

The flight clinic began Thursday and is scheduled to end Sunday.

The event is sponsored by the Bulldog Formation Flight Team, the largest such team in Arkansas, which is headed by Gerald "Bulldog" Lloyd, who began building his RV-4 experimental aircraft as a family project in 1987. Four years later it was ready to fly and has been flying ever since.

"A few years ago I was thinking of selling it," Lloyd, who lives in Dumas, recalled. "My daughter got wind of it and called me up and told me, 'you are not selling OUR airplane. We built it and you are not going to sell it.' And that was that."

The purpose of the flight clinic, Lloyd said, is to teach pilots the art of formation flying and to administer tests to those ready to ascend to the next level, each level designated by its own color.

Red is a pilot new to formation flying who is only allowed in a formation accompanied by an instructor. Pink level denotes a pilot who has some experience and can fly solo in two-ship formations only. Yellow denotes pilots who are qualified to fly in four-ship formations and green shows a pilot has passed a wing check ride.

Blue, the highest level, is the designation for a flight leader.

As each four-ship formation team takes to the skies from Grider Field, the testing candidate is put through a series of esoteric sounding maneuvers such as the echelon, the fingertip, the cross under, the lazy eight, the close trail, the rejoin, and finally, the overhead break as the formation prepares to land. The entire exercise, from engine start to engine shutdown, is tightly regimented and rigidly choreographed, every move of the pilot being tested scrutinized and graded.

"Because this can be dangerous, we're a lot tougher on the people who are trying to get their cards," Lloyd explained. "It's a real difficult check ride."

Lloyd said the program was developed by a former Air Force pilot, Stuart McCurdy of Round Rock, Texas, after the Federal Aeronautics Administration adopted a rule in the early 1990s that for any pilot to qualify to fly in FAA waivered airspace, such as air shows, sporting events, patriotic displays, or other events, they would have to have an FAA Formation Card. However, at the time the rule was adopted, no training program existed for experimental or general aviation aircraft, so McCurdy founded Formation Flying Inc. in 1999 and developed the training regimen now in use.

Lloyd said the training is uniform across the country, which he said allows pilots from Pine Bluff to join in formation with pilots from California, New York, or anywhere in between safely and confidently.

"They're using the same manual, the same signals, the same formations and everything that you learn here," he said. "We've been able to put together some formations as large of 50 airplanes because of that."

Lloyd said he was involved in a formation flight in 2014 for the Phoenix Motor Speedway's 50th anniversary celebration in Arizona.

"They got in touch with our friends in Kansas City that have KC Flight, they call it, and asked them if there was any way they could put together a 50-ship formation," he said. "He called all the different teams around there, the Ohio River Rats, Team RV in Atlanta, the West Coast Ravens, and he got enough people together to do a 50-ship flight.

"I was amazed," Lloyd continued. "We had all of those planes, those home-built planes that came from all over, the East Coast, West Coast, up on the Canadian border even, and we didn't have anyone abort because of mechanical issues or anything else."

On Friday, the order of the day consisted of morning formation flights, then lunch in the hangar headquarters of the Razorback Chapter of the Experimental Aircraft Association, then afternoon formation flights. In the afternoon, Angela "Scrubs "Palmer, a neurosurgery resident at UAMS, was scheduled to go up for a wingman check ride, her final hurdle to earning the Formation Card that would allow her to fly formation in FAA-waivered airspace. Also on the flight were pilots Tommy "Vader" Palmer, her husband of five years and a pilot for Southwest Airlines, Lloyd, and Phillip "Ripper" Lamb, the check pilot who would put Angela through her paces in her attempt to move from yellow to green status.

After a preflight briefing next to the four aircraft sitting on the tarmac, the four pilots climbed into their machines and started the engines. At that point, every movement was choreographed and scrutinized at every point during her check-ride flight all the way through a formation landing, the ride down the taxiway, until the engines were shut down as the aircraft were parked in formation.

Disembarking from the aircraft, the pilots walked inside for an in-depth critique of Angela's performance as viewed by the other three pilots.

"Her takeoff, she nailed it," Lloyd observed. "Every time I looked out she was right where she needed to be."

Angela was somewhat more critical of some of her flying that day, saying her first and second passes weren't up to her standards but said it got better.

"I felt a little rusty but the third one was good," she said.

"From the No. 3 standpoint I couldn't see anything wrong," Lloyd said. "That was perfect."

Lamb observed that Angela tended to stack up on the rejoins, as the planes came back into formation, and offered some tips to smooth them out.

"You got the wash on two out of three of them and you probably know you did because I could see the whole airplane wiggle," Lamb said. "But you had very good airplane control, very smooth piloting, I was very impressed."

Then, with a broad smile, Lamb said, "Congratulations to our new wingman," indicating she had passed the test as Jerry "Homie" Homsley crossed the room to present her with the green sticker indicating that she had earned her Formation Card.

"Looks like a perfect afternoon for flying," Lamb said. "It's calm, the rain's stopped, everything looks perfect."

Within moments, canopies were pulled back, engines started, and a fleet of RV experimental aircraft took to the skies for one last flight of the day. 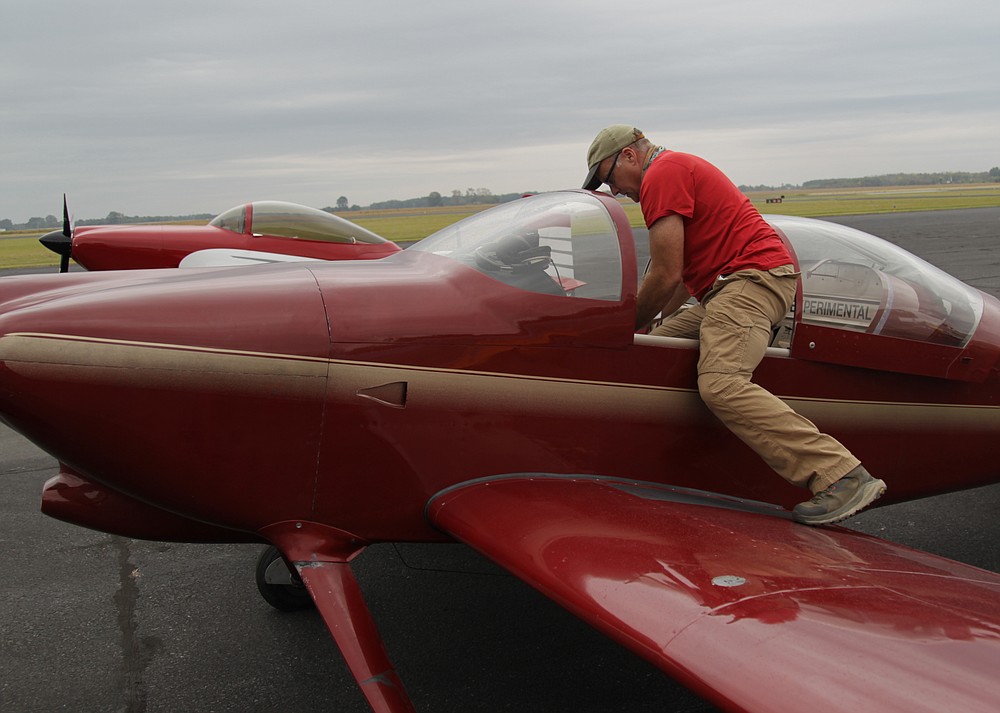 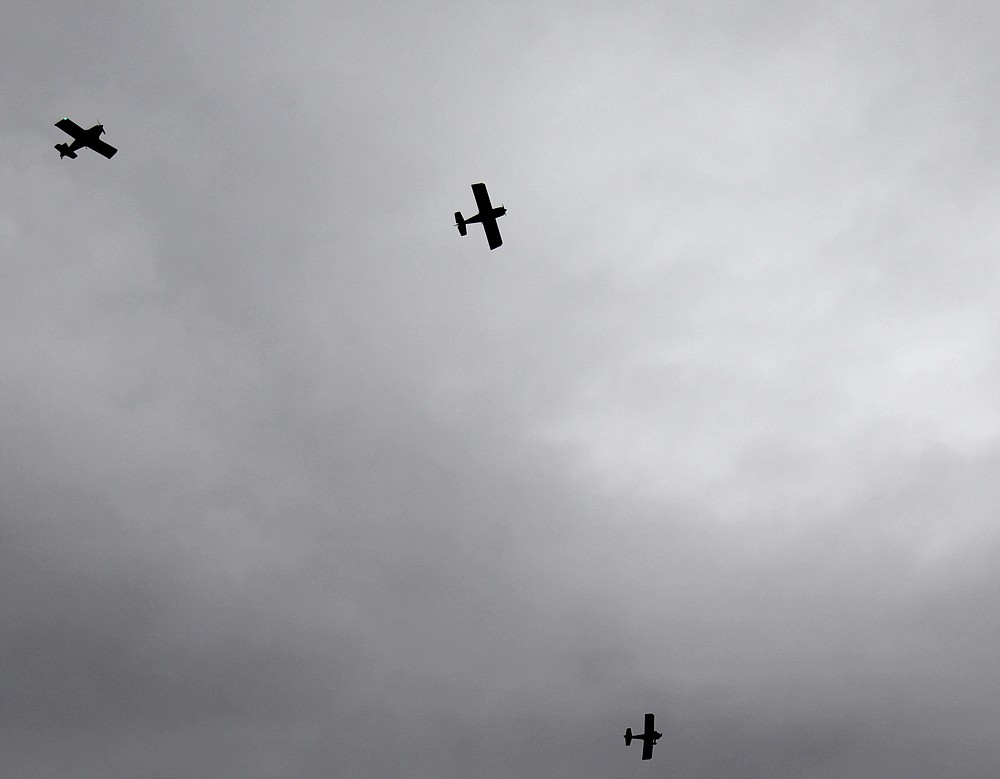 A formation of pilots perform an overhead break maneuver over Grider Field in order to create sufficient separation between the planes for the three to land safely. Formation flying often requires the aircraft to be within 15 feet of one another, according to Gerald Lloyd of Dumas, head of the Bulldog Formation Flight Team, which sponsored the weekend formation flight clinic. (Pine Bluff Commercial/Dale Ellis) 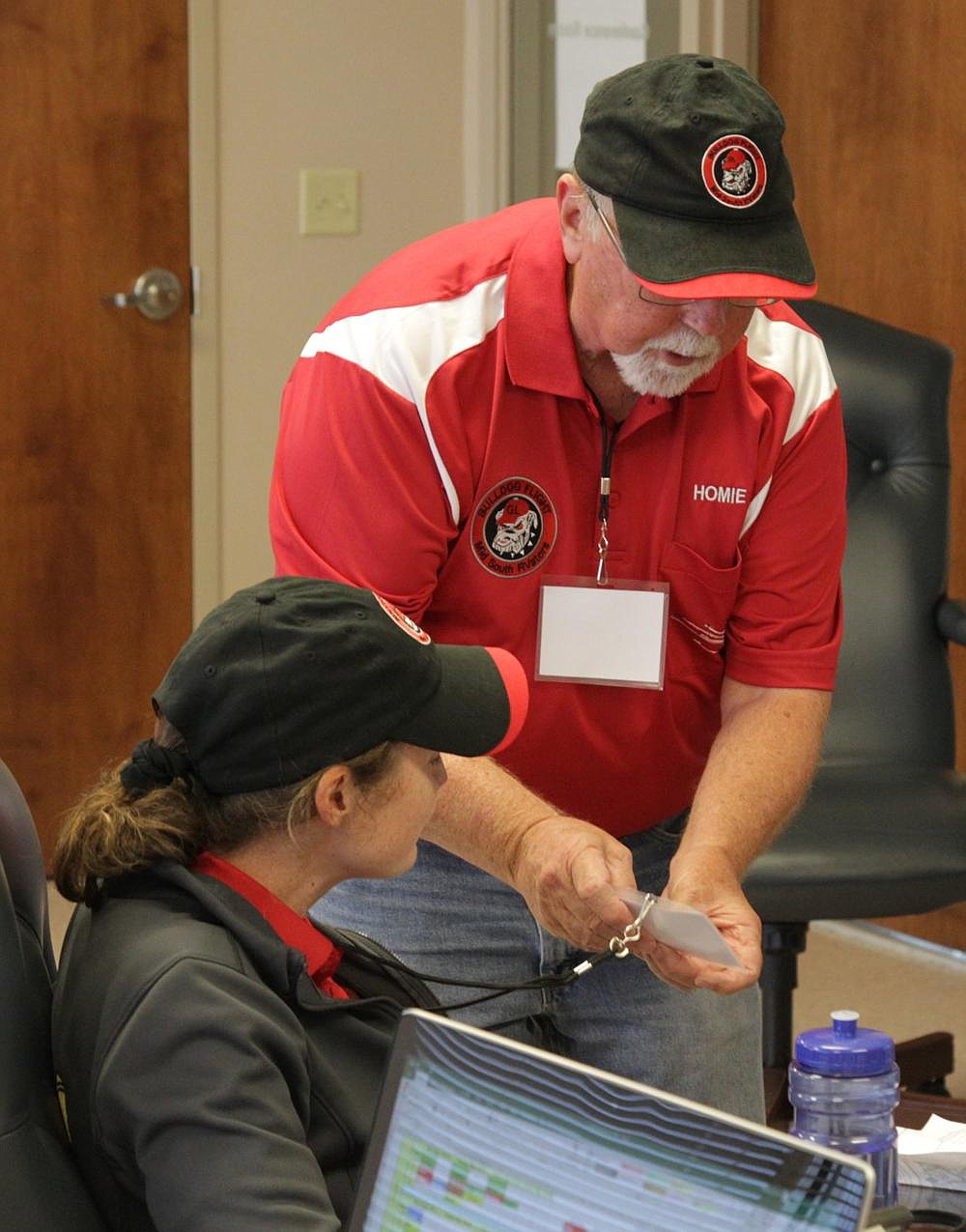 Angela “Scrubs” Palmer, a neurosurgery resident at the University of Arkansas for Medical Sciences, is presented with her green formation flight sticker by Bulldog Formation Flight Team member Jerry “Homie” Homsley, indicating that she has passed her wingman check-ride and has qualified for her FAA Formation Card. (Pine Bluff Commercial/Dale Ellis)
ADVERTISEMENT