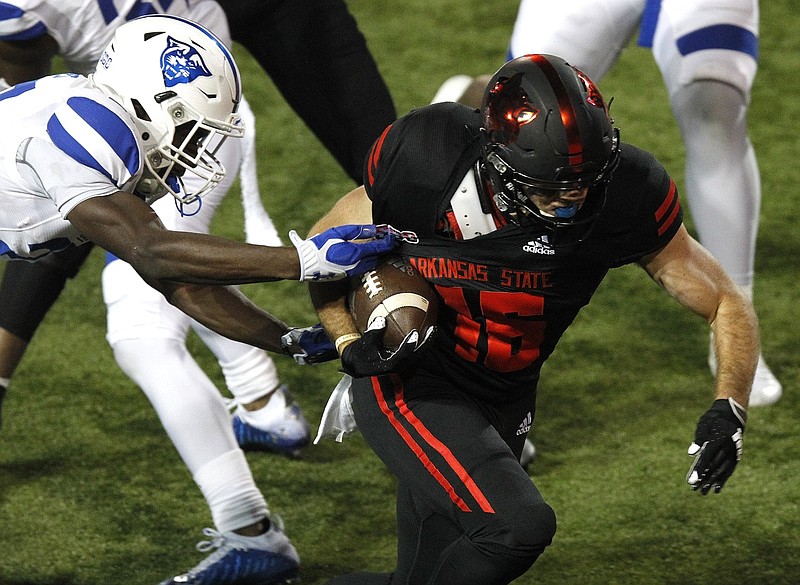 JONESBORO — On fourth and six with 2:10 and leading 59-52, Arkansas State's defense needed one last stop — something that had been hard to come by all night.

And they got it, as sophomore cornerback Samy Johnson and senior safety Elery Alexander broke up a pass down the right sideline to secure ASU's first Sun Belt win of the season, beating Georgia State (1-2) 59-52 in a thriller Thursday night in Jonesboro.

ASU jumped out to an early 7-0 lead thanks to Georgia State's punter botching a snap on the opening drive of the game, which junior quarterback Logan Boner turned into his first touchdown pass of the day three plays later. Then, after a five-play, 99-yard touchdown drive by Georgia State, sophomore Layne Hatcher threw his first touchdown of the night on a 49-yard pass to senior receiver Dahu Green.

Trailing 14-7 to start the second quarter, and with Arkansas State driving to take a two-score lead, Georgia State flipped the momentum in its favor when it strip-sacked Bonner and returned the fumble 76 yards for a touchdown.

In the final six minutes of the half, the Red Wolves and Panthers traded scores on four straight possessions to tie the game, 28-28, going into halftime. Bonner connected with Jonathan Adams Jr. from 42 yards out, and Hatcher found Green for a 20-yard score, but it was the Panthers who took all the momentum into the locker room after a five-play, 75-yard drive that took just 34 seconds and left only 14 seconds on the clock.

The two teams traded scores again to start the third quarter, with Georgia State taking advantage of an ASU failed fourth down conversion and scoring two plays later while ASU responded with Bonner's third touchdown pass of the day. After a Georgia State punt, Hatcher would throw his third touchdown of the day this time to freshman running back Lincoln Pare. Georgia State tied the game at 42 before a 39-yard field goal by junior kicker Blake Grupe would gave Arkansas State a 45-42 lead heading into the final quarter.

Georgia State scored on the first play of the fourth quarter to retake the lead, but Hatcher would answer with a 32-yard touchdown pass to Adams to take a 52-49 lead with 12:40 to go. Georgia State tied the game at 52 with 6:55 remaining before ASU completed a reverse pass from junior receiver Roshauud Paul to Pare for a 22-yard touchdown. With 4:23 left, Arkansas State led 59-52 before turning Georgia State over on downs with 2:04 remaining. Arkansas State would convert one more first down to seal the 59-52 win.