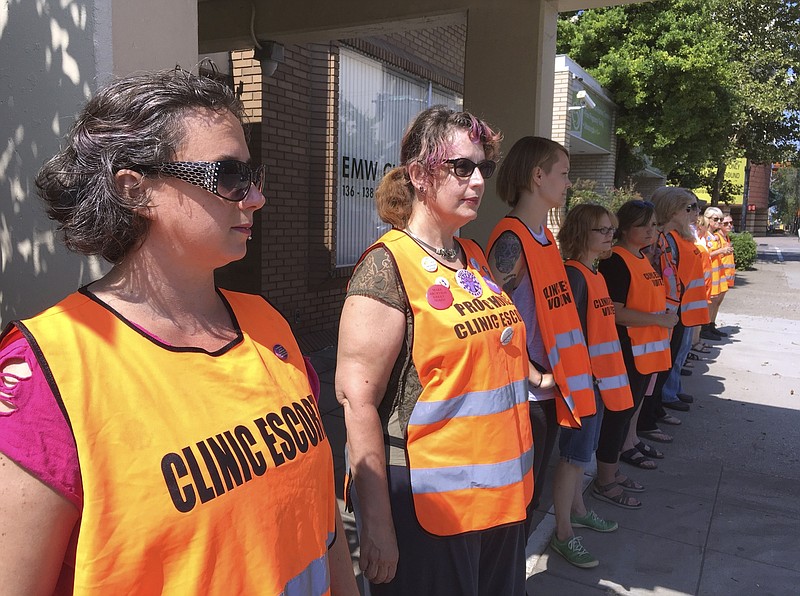 FILE - In this July 17, 2017 file photo, escort volunteers line up outside the EMW Women's Surgical Center in Louisville, Ky., the state's only abortion clinic. Kentucky's Attorney General Daniel Cameron, an anti-abortion supporter, said Friday, March 27, 2020, that abortions should cease as part of the governor's order halting elective medical procedures in the state due to the coronavirus pandemic. (AP Photo/Dylan Lovan, File)

A federal appeals court has upheld a decades-old Kentucky law requiring abortion clinics to have written agreements with a hospital and an ambulance service in case of medical emergencies.

VThe 2-1 decision by the 6th U.S. Court of Appeals reverses a federal judge's ruling, who had said the 1998 Kentucky law violated constitutionally protected due process rights.

However, in Friday's ruling, the appeals court rejected that argument and countered the "district court erred in concluding that Kentucky would be left without an abortion facility."

In 2017, EMW Women's Surgical Center -- the state's only clinic that provided abortions at the time -- decided to challenge the state law after becoming embroiled in a licensing fight with then Gov. Matt Bevin. The Republican's administration had claimed the clinic lacked proper transfer agreements and took steps to shut it down.

Planned Parenthood of Indiana and Kentucky later joined the suit, claiming Bevin's administration had used the transfer agreements to block its request for a license to provide abortions in Louisville.

Critics of the law claimed such licensing requirements were designed to give the state a reason to ban abortions. Supporters said the law bolstered patient safety.

The two clinics have since been allowed to provide abortions after Democratic Gov. Andy Beshear, who supports abortion rights, took office in late 2019.

According to the 73-page ruling, the appeals court rejected the clinics' argument their facilities were in jeopardy of closing because the Kentucky law allows clinics to apply for a 90-day waiver if they are denied a licensing agreement.

Facilities could theoretically reapply for the waiver every quarter and thus be allowed to continue to operate, the appeals judges argued.

"[We] must presume that the Inspector General will consider waiver applications in good faith and will not act 'simply to make it more difficult for [women] to obtain an abortion,'" the ruling stated.

"EMW and Planned Parenthood have failed to make a clear showing that both of their abortion facilities would close if [the laws] go into effect," the ruling continued.

The American Civil Liberties Union of Kentucky, which had represented the clinics in the case, said Friday's ruling would result in health care providers being subject to "needless red tape."

"Abortion providers should not have to jump through medically irrelevant hoops to keep their clinic doors open. We will continue to fight to make sure that people are able to get the care they need," said Brigitte Amiri, deputy director of ACLU's Reproductive Freedom Project.

"The Sixth Circuit's ruling keeps in place an important Kentucky law for protecting the health and safety of patients by finding that Planned Parenthood and EMW failed to prove that they could not comply with the statute and regulation," Cameron said in a statement.