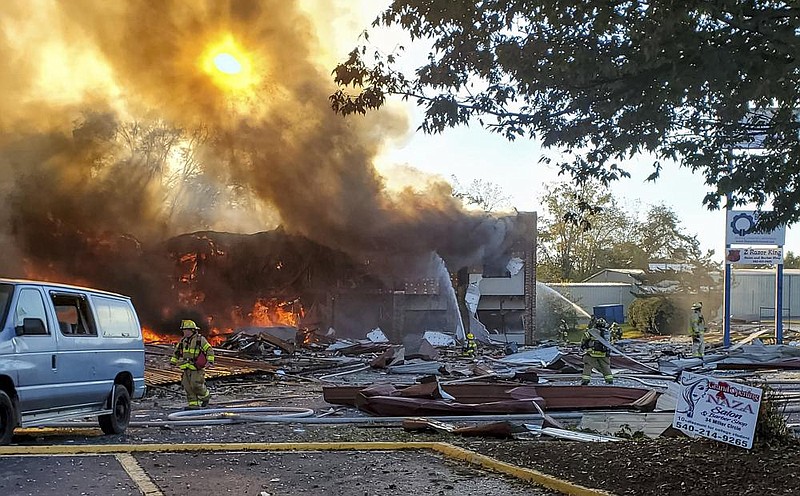 Firefighters work to contain the flames Saturday after the explosion at a shopping center in Harrisonburg, Va. (AP/Daily News-Record/Ian Munro)

HARRISONBURG, Va. -- Officials said an investigation was underway into the cause of an explosion and large fire at a shopping center in Harrisonburg that injured several people Saturday morning.

Three people were hospitalized as a result of the incident, which was reported about 8:30 a.m., the Daily News-Record reported. Several others were injured but treated on-site.

City spokesman Mike Parks told the newspaper that a search of the remains of the building had not turned up any other victims, but a second search was being conducted Saturday afternoon to be sure.

Gov. Ralph Northam tweeted that state emergency personnel had been deployed to the area after what he called a gas explosion. But Harrisonburg Fire Chief Matt Tobia told reporters that the cause was under investigation.

Tobia said that when crews arrived, the injured were outside the building. The fire was later contained.

The university said in a Facebook post that three students from the school's Army ROTC program who had been participating in a 10-mile race were among those injured. The building where the blast occurred was about 30 yards from the race's start and finish line, the university said.

One of the students was hospitalized but was expected to be quickly released, the university said. Two other students were treated at the scene and released, according to the post.

Federal funding is also available to the state, tribal and local governments and certain private nonprofit organizations on a cost-sharing basis for emergency work and the repair or replacement of facilities damaged by the hurricane in those parishes.

AUBURN, Ala. -- A new study will look at how the pandemic is affecting poor communities in Alabama, Louisiana and Mississippi.

An announcement from Auburn University said the yearlong research will examine how leaders can get people in low-income, vulnerable communities to take collective action during a crisis.

The study will look at how health messages are received in such places in the three states, said research team leader Kelly Dunning.

"Specifically, we will analyze the effectiveness of science-based messages, how influential various sources of the messages were and the perceived trustworthiness of the institutions delivering covid-19 information in low-income communities, compared to their wealthier counterparts," she said.

The work was proposed because Black people, Native Americans and other minority groups are disproportionately affected by covid-19, the illness caused by the coronavirus. The findings could help by showing how to encourage larger numbers of people to lessen the effects of a crisis.

The study is funded by a $150,000 grant from the National Science Foundation.

SAN FRANCISCO -- A federal judge in San Francisco is weighing the competency to stand trial of a Mexican man accused of killing 32-year-old Kate Steinle in a shooting that figured prominently in President Donald Trump's run for the White House four years ago.

"I'm tired of waiting here," Garcia Zarate told the court Friday through a Spanish interpreter, adding that he wanted to be sentenced to prison or deported back to Mexico.

Two doctors have diagnosed Garcia Zarate with schizophrenia and found him unfit to stand trial because he cannot follow the court proceedings.

Garcia Zarate has also said he wants to plead guilty. The judge told him that he would not be allowed to do so on Friday.

Garcia Zarate has been in detention since the July 1, 2015, shooting on a crowded San Francisco pier, which set off a political firestorm over immigration and crime.

A San Francisco Superior Court jury acquitted him of various charges, including murder, in late 2017. An appeals court later overturned the only conviction prosecutors obtained against him, that of being a felon in possession of a firearm.