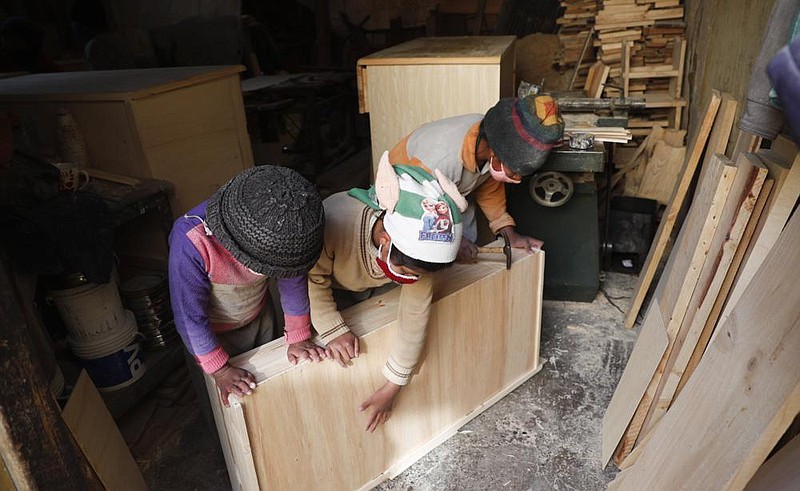 Three of the Delgado children, from right, Yuri, 11, Wendi, 9, and Alison, 8, make a drawer in the family carpentry workshop in El Alto, Bolivia, in early September. (AP/Juan Karita)

JOTOLCHEN, Mexico -- The coronavirus pandemic is threatening the future of a generation of the world's children, depriving them of schooling and sending them to work. Across the developing world, two decades of gains against child labor are eroding.

With classrooms shuttered and parents losing their jobs, children are trading their ABC's for the D of drudgery: Reading, writing and times tables are giving way to sweat, blisters and fading hopes for a better life.

Instead of going to school, children in Kenya are grinding rocks in quarries. Tens of thousands of children in India have poured into farm fields and factories. Across Latin America, kids are making bricks, building furniture and clearing brush, once after-school jobs that are now full-time work.

These children and adolescents are earning pennies or at best a few dollars a day to help put food on the table.

Governments are still analyzing how many students have dropped out of their school systems, but with school closures affecting nearly 1.5 billion children around the world, UNICEF estimates the numbers could be in the millions.

Experts say the longer their education is put on hold, the less likely children will return to school. The ramifications, especially for those already lagging, can be lifelong -- narrowed job opportunities, lower potential earnings and greater likelihood of poverty and early pregnancy.

"The repercussions could be felt in economies and societies for decades to come," Henrietta Fore, executive director of UNICEF, the U.N. children's agency, warned in August. For at least 463 million children whose schools closed, there is no possibility of remote learning.

It is, she said, a "global education emergency."

In the mountains of Mexico's Chiapas state, the suspension of school meant 11-year-old Andres Gomez began spending full days swinging a hammer inside a hand-carved mine looking for amber. A native speaker of Tzotzil, Andres had been learning Spanish, a skill that would open more opportunities for him.

"What I want to learn is to read and write," he says.

His teacher, Joel Hernandez, recently went to pick up workbooks in Jotolchen that students who otherwise have no access to distance learning were supposed to complete. Only about 20% of the students had done the work and Andres wasn't one of them.

"If Dad is going to the fields, to the coffee grove, to the mine, the child is not going to stay at home with nothing to do," Hernandez says. "For them, to sit around watching television, if they have it, is like wasting time."

Experts say in the past, most students who have missed class because of crises like the Ebola epidemic returned when schools reopened. But the longer the crisis drags on, the less likely they will go back.

Yliana Merida, a researcher at the Autonomous University of Chiapas, Mexico, said that even more than before, the pandemic has turned education into a luxury. "Many parents opt for 'you're going to work to help me at home because right now we really need it.'"

In El Alto, a suburb perched above Bolivia's capital of La Paz, five siblings between the ages of 6 and 14 years old are bundled in hats and coats against the chilly mountain air as they and their parents work all in their family's small carpentry workshop.

The youngest, 6-year-old Mariana Geovana, would have started kindergarten this year; instead, she smooths miniature furniture with scraps of sandpaper. Jonatan, 14, the most experienced, uses the electric saw to cut lengths of wood for doll-size beds and full-size chests of drawers.

"I'm frustrated not being able to go to school," he says. "You learn talking with your classmates and your teachers."

The Bolivian government decided to cancel the school year in August because it said there was no way to provide an equitable education to the country's nearly 3 million students.

Their father, Hector Delgado, 54, knows what is at stake. "For the students the closure of the school year is a catastrophe. They're not going to make up the time and I strive for them to be more than carpenters."

Since the suspension of in-person classes, children are working many more hours than usual throughout the rustic brickyards of Tobati, Paraguay.

With the help of his 10-year-old son, Hugo Godoy shovels mounds of clay and sandy earth, preparing to make the next day's bricks. Godoy has also been sending him to work at a nearby larger factory where his 15-year-old son works as well since schools closed in March.

"I spoke to the owner and said that if he gave him light work -- moving the raw materials and things like that -- then I'd let him go," Godoy said, speaking in his native Guarani language. "There are lots of children working."

At a quarry in Nairobi, Florence Mumbua works alongside her children, ages 7, 10 and 12. Mumbua lost her cleaning job at a private school when the pandemic hit, and the family doesn't have the resources for the children to learn online. So together they crush rock, each earning about 65 cents a day.

"I have to work with them because they need to eat and yet I make little money. When we work as a team, we can make enough money for our lunch, breakfast and dinner," Mumbua said.

In India, Dhananjay Tingal fears that millions more children will "fall back into trafficking, child labor and child marriage because the economic crisis is looming large."

As executive director of the Bachpan Bachao Andolan -- a children's rights group whose founder, Kailash Satyarthi, won the Nobel Peace Prize in 2014 -- Tingal has watched with horror as child labor grows in a country that already has one of the world's worst records.

A harsh nationwide lockdown imposed in March pummeled the Indian economy and pushed millions of people into poverty, forcing many poor families to put their children to work to make ends meet. When the economy opened, tens and thousands of children took jobs in farms and factories.

"This is a serious problem," he said.

Information for this article was contributed by Tom Odula, Sheikh Saaliq and Christopher Sherman of the Associated Press. 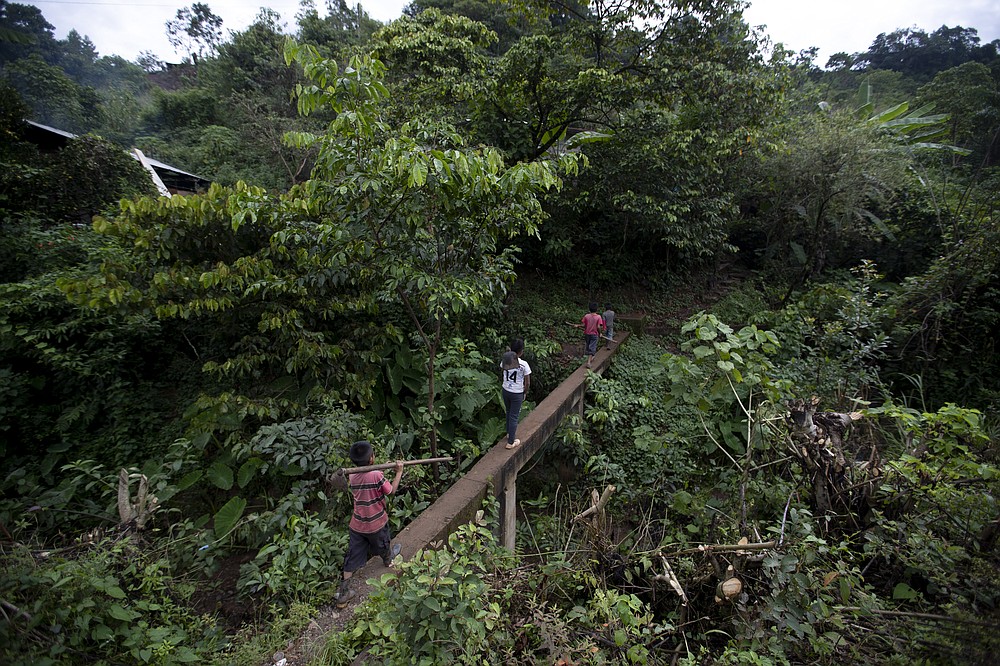 Juan Gabriel Vazquez, center, and his brothers walk to the corn fields to work in the community of Nuevo Yibeljoj in Chiapas state, Mexico, Friday, Sept. 11, 2020. The COVID-19 pandemic that has claimed a million lives and disrupted economies around the globe is also sending children like the Vazquez's back to work throughout the developing world, threatening gains made against child labor over the past 20 years. (AP Photo/Eduardo Verdugo) 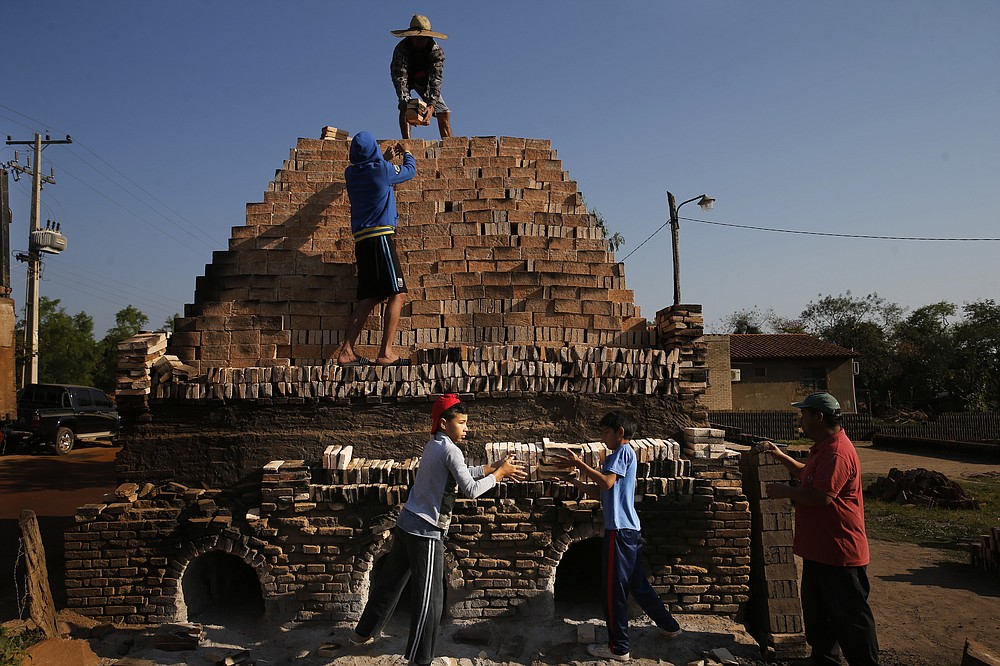 Children work with their relatives to load a kiln with clay bricks in Tobati, Paraguay, Friday, Sept. 4, 2020. In many of the small Tobati brick factories, locals begin to work at an early age to complement their family's income. (AP Photo/Jorge Saenz) 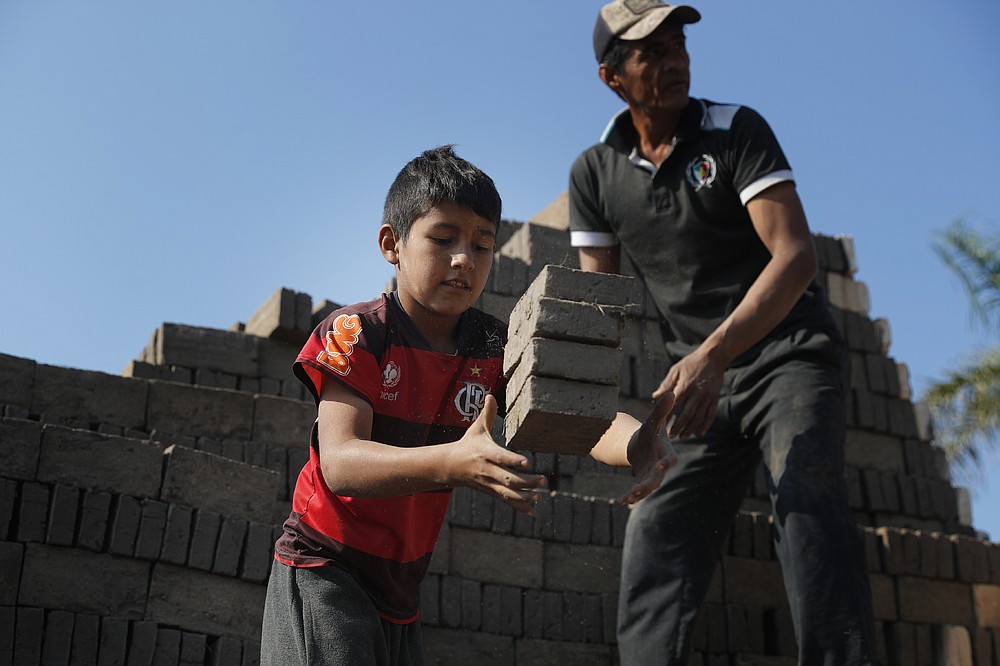 Alejandro, 9, catches bricks to pass over to a man who puts them in the kiln at a brick factory run by his uncles in Tobati, Paraguay, Monday, Aug. 31, 2020. Members of brickmaking families said school closures due to COVID-19, scheduled to last at least until December, have led to many children and adolescents working longer hours, making it difficult to complete their virtual schoolwork. (AP Photo/Jorge Saenz) 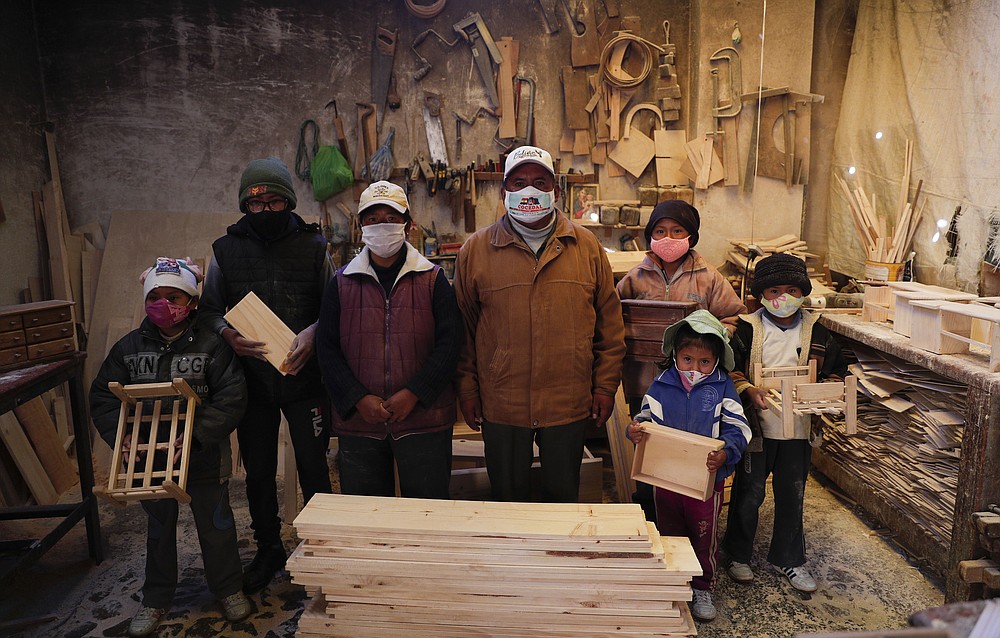 Wearing masks to curb the spread of the new coronavirus, the Delgado family poses for a photo in their carpentry workshop in El Alto, Bolivia, Friday, Aug. 28, 2020. After the government canceled the school year, the five children between ages 6 and 14 work in the carpentry workshop with their parents. (AP Photo/Juan Karita) 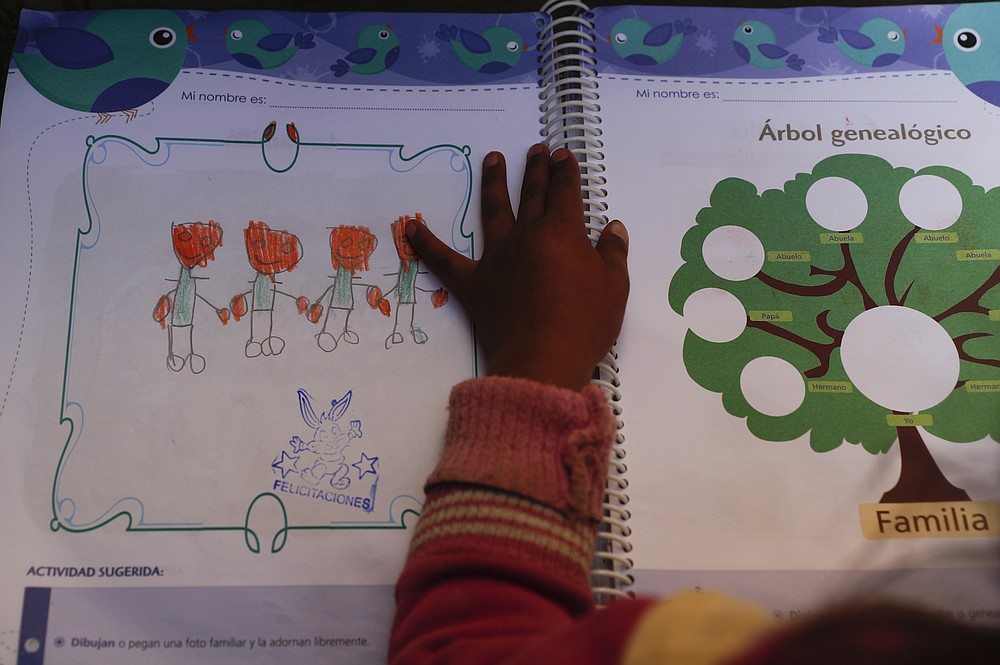 Mariana Delgado does schoolwork at her family's carpentry workshop in El Alto, Bolivia, Wednesday, Sept. 2, 2020. “For the students the closure of the school year is a catastrophe. They’re not going to make up the time and I strive for them to be more than carpenters,” said the six-year-old's father, Hector Delgado. (AP Photo/Juan Karita) 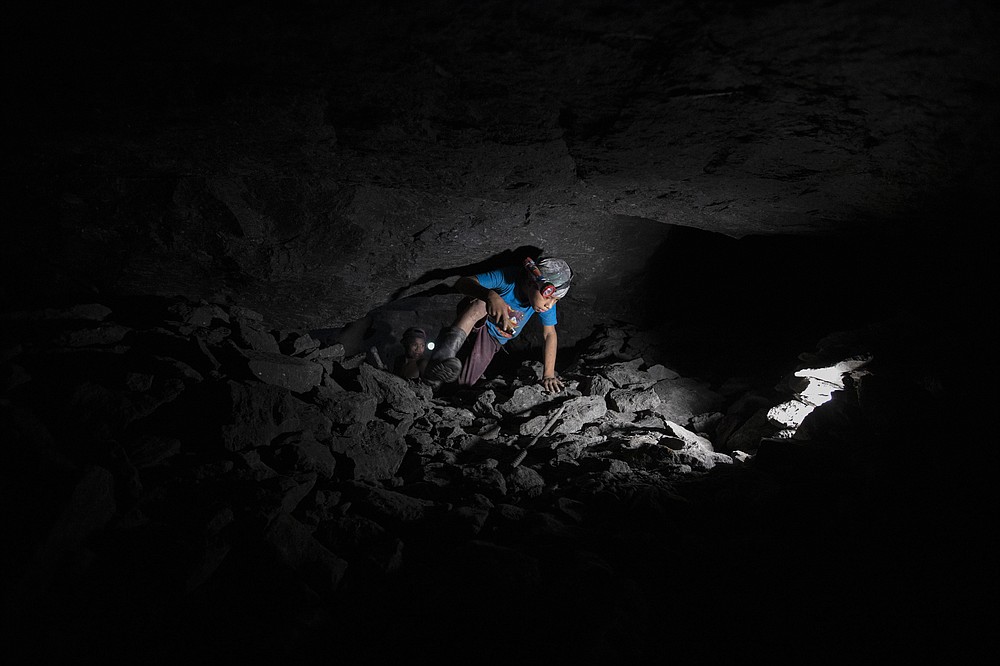 Andres Gomez works inside an amber mine near the community of Jotolchen II in Chiapas state, Mexico, Thursday, Sept. 10, 2020. The 11-year-old said that before the new coronavirus pandemic hit, he attended school and then would spend a couple of hours mining after class, but since the school closed in March he is spending entire days mining. (AP Photo/Eduardo Verdugo) 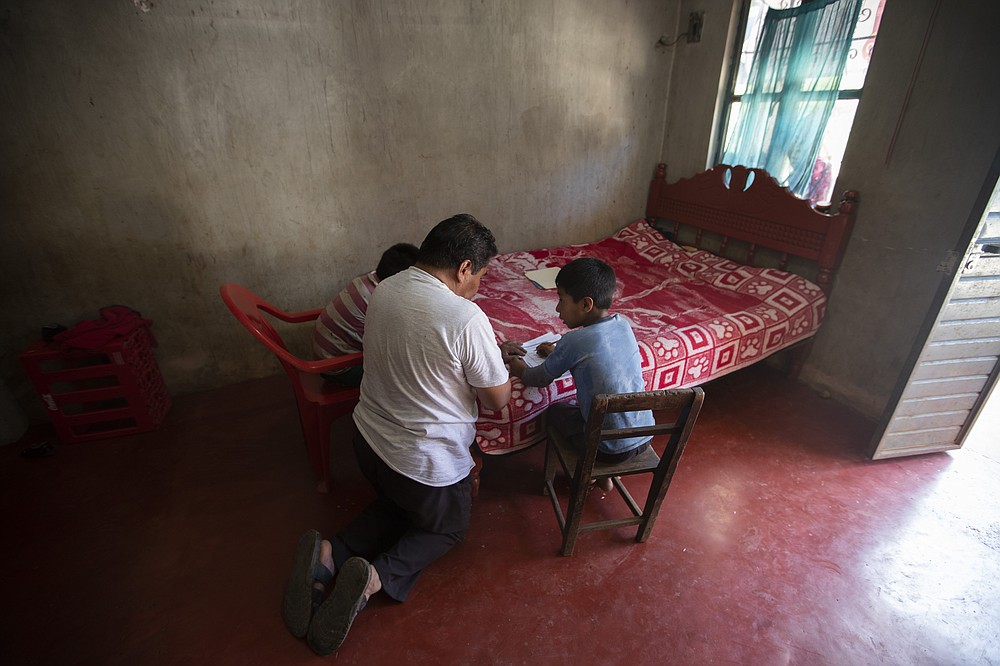 Using a bed as a desk, Agustin Vazquez helps his sons Samuel and Hector with their schoolwork handed out by teachers amid the new coronavirus pandemic at their home in Nuevo Yibeljoj, Chiapas state, Mexico, Friday, Sept. 11, 2020. “I try, but it’s not the same as a teacher, because I’m a farmer,” said Agustín. (AP Photo/Eduardo Verdugo)
ADVERTISEMENT