Australia: Most of refugees resettled 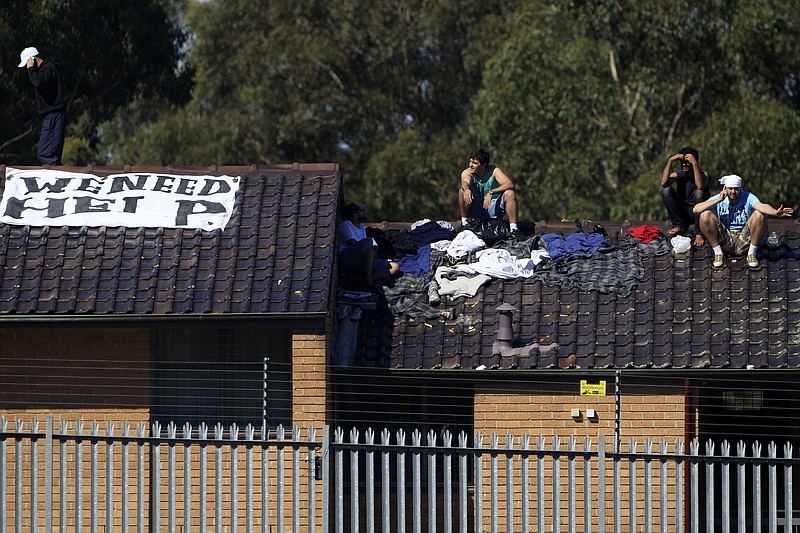 FILE - In this April 12, 2011, file photo, Five male detainees gather on a rooftop of the Villawood Detention Center in Sydney, Australia. The United States is expected to have resettled more than 1,100 refugees by early next year under a deal President Donald Trump reluctantly honored with Australia, an Australian official said on Monday, Oct. 19, 2020. (AP Photo/Rick Rycroft, File)

CANBERRA, Australia -- The United States is expected to have resettled more than 1,100 refugees by early next year under a deal President Donald Trump reluctantly honored with Australia, an Australian official said Monday.

President Barack Obama's administration struck a deal in 2016 to accept up to 1,250 refugees from Iran, Bangladesh, Somalia and Burma whom Australia had banished to Pacific island camps.

Trump condemned the deal as "dumb" but agreed to honor the commitment, subject to "extreme vetting" of the refugees.

While resettlement had been disrupted in recent months by the pandemic, Ablong said Australia expected the last of the refugees accepted by the U.S. to be resettled by March or April.

The deal "is operating very effectively to date," Ablong said.

The end of the U.S. agreement was expected to leave about 80 asylum-seekers on the poor island nations of Papua New Guinea and Nauru.

Australia deterred asylum-seekers from coming by boat in 2013 by banning those who arrive by sea from ever being allowed to settle on the mainland.

Australia pays Papua New Guinea and Nauru to house such people under deals that have been condemned by human rights groups.

Ian Rintoul, spokesman for the Australian advocacy group Refugee Action Coalition, said the fate of asylum-seekers left on Nauru and in the Papua New Guinea capital Port Moresby was unclear.

"The government's got no solution for the people that will be left behind," Rintoul said.

New Zealand's offer to take 150 refugees a year has been refused while the U.S. continues to accept them.

The government's policy of denying resettlement to those who arrive by boat includes those who received medical treatment in Australia and then got court injunctions preventing their return to Nauru and Papua New Guinea. There are currently 1,226 such asylum-seekers in Australia, Ablong said.