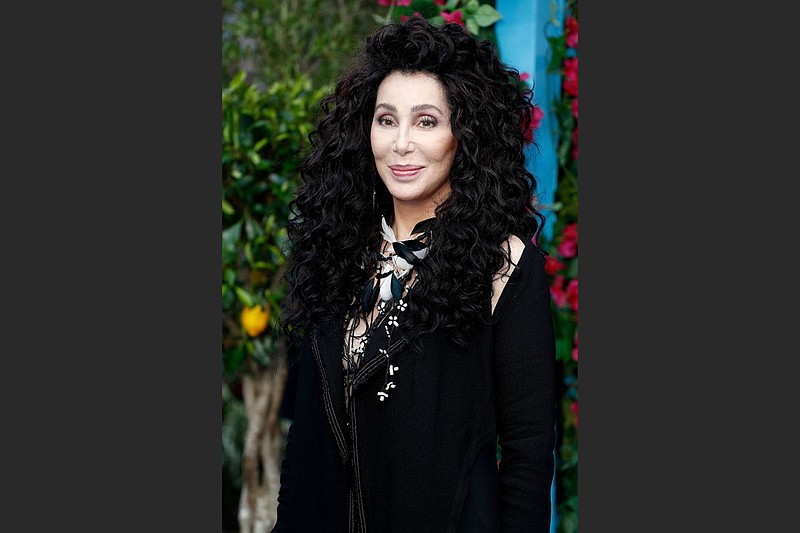 Cher has news. Big news. The kind of news that makes her stop midsentence and exclaim, "Oh!"

It's about a bio-pic that's being planned to follow a memoir that she's now writing.

It is really, really good news.

But it's a surprise. And she's not going to reveal it. Which doesn't really help me, I tell her.

"Just be excited for me," she answers, laughing. "Just be happy for me, OK?"

And since I'll take whatever happiness I can find and share in these days, I acquiesce. Also: Cher's on the phone from her home in Malibu. How can you not be happy?

Ostensibly, the call is to talk about her receiving the Spirit of Katharine Hepburn Award at a recent virtual fundraising gala. (Watch Cher's acceptance interview starting at 58:03 here: arkansasonline.com/1020cherandkate.)

But the conversation wanders and soon we're talking about David Bowie, life during the pandemic and why — even at age 3 — Cher was already Cher.

Q You paid tribute to Katharine Hepburn a few years ago on Turner Classic Movies, saying you'd watched some of her movies 30 or 40 times ...

A Well, I was excessive, wasn't I? I'm very dramatic. I probably haven't watched them that many times, but whenever I see one of her movies on TV, I think, "Oh. I love this. I'll just watch it for a minute." And then I watch it until it's over. "Philadelphia Story." "African Queen." "Stage Door." There's some strange ones too, like "State of the Union." Or that one with Spencer Tracy where the husband is killed but he was really like a fascist. "Keeper of the Flame."

Q Did you see the most recent one directed by Greta Gerwig?

Q I'm guessing from that pause you still like the Taylor one the best.

Q Did watching Hepburn's style and self-reliance influence you as a young woman?

They were all single women, always looking for husbands, but they never liked them. Women looked for husbands in those days. It was like scavenger hunts. But then they didn't want to be with them, mostly because the husbands that were attracted to them were attracted to them because they were more modern. But dating and marrying a modern woman in those days, it wasn't the same. When I was young, women were introduced by their husbands' names. "This is Mrs. James Turnbull." And I used to think, "What the are they doing?"

Q Were you ever introduced as Mrs. Sonny Bono?

Q Is that something you would have accepted then?

Q Did you ever meet Hepburn?

A One year at the Academy Awards [in 1974] a bunch of us were watching the show backstage, and she walked by and everyone was aghast and agog. And she looked at me and said, "Hey, kid." It was like the night I got the Academy Award and came offstage and walked smack into Audrey Hepburn. And she said, "I'm so glad you won." It was like getting a second Oscar, to tell you the truth. I called them my Hepburn girls because they were my two favorites.

Q You would have been a teenager when "Breakfast at Tiffany's" came out. Did that hit movie hit you a different way than when you watched the Hepburn movies with your mom as a little girl?

A I put my hair in two pigtails and got suspended from school because I started wearing those big Holly Golightly sunglasses and wouldn't take them off.

Q You were dressing the part and adopting the attitude.

Q What were you doing at 3 to separate yourself from the pack?

A When I was 3, I was the only child in my mother's group of friends and they were all artists. There was about 20 of them and everyone was a sculptor and a dancer and an actor, all that stuff. And my mother used to go to this place called Ben Bard's Acting Studio, and they put on plays. And I would sit in the audience, learning the speech from "Macbeth" — "double, double toil and trouble" — when I was 3.

Q It's a pretty straight line from there to "The Witches of Eastwick." I'm guessing this is all going to be in your memoir. Are you close to finishing it?

Q I'm not putting any pressure on you. You just tweeted a couple of years ago that it'd be arriving in 2020.

A I know. But tell me when that ever happens. It's a long life. It's very difficult to write. People think they know everything, but they don't.

Q What do you want people to know that they might not know now?

A I'm not telling you! Read the book!

A No! Buy the book! Spend your money.

Q [Pause] OK. Has the process of writing this been ...

Q I was going to say rewarding. Have you found it fulfilling sifting through the 74 years of your life?

A There's a lot of it you love and there's some of it that wasn't fun and you didn't enjoy and was painful and you have to decide: How far do I want to go? But I'm pretty brave.

Q If the pandemic hadn't hit, you'd be in Wichita, Kan., right now on your concert tour. Do you miss performing?

A Well, yes. But do you know what I miss more? What I miss more was how we felt, how simple life seemed to be. You know, I hugged my friend the other day, and everybody just freaked out. And I freaked out afterwards. But we're huggy people. We were on tour when all this happened, and I'm surprised we didn't get it because we're very huggy people and there's like a hundred of us.

So, of course, I'd like to be onstage. But it's more than just that. I would just like for people to have freedom and laugh and go into CVS and look at cheap makeup. Pick out Maybelline and go, "Oh, this is still the best mascara." Just be able to do whatever you want to do with your friends and not be worrying about people dying and what's the number today and isn't anybody going to do anything.

I go to my mom's sometimes. But I have to be careful. My mom and I are not spring chickens. My mom's 94. But my mom thinks she's 74, OK? She keeps saying things like, "Well, you don't have to be careful. I'm 74." And I went, "No, mom. I'm 74." She's beautiful. I mean, she's unbelievable. We all hate her. Because she's got a gigantic mass of hair, and nobody deserves that much hair. And also, she just wears lipstick and she's really pretty. We always yell at her when we see her.

Q Well, you have her genes. You'll be well-served when you're 94.

A God willing and the creek don't rise, as my mother would say.

Q The Hepburn movies give you comfort. You know what's a balm to me in trying times? That duet medley you did with David Bowie on the "Cher" show. (Watch Cher and David Bowie here: arkansasonline.com/1020cherandbowie/.)

Q You know what I'm talking about?

A No. I've lost my mind. [Pause] Of course I know what you're talking about!

A Do you know where he got that suit he was wearing? Sears. He said, "Cher, I want to go to Sears and buy a suit." And I went, "OK, dude. Knock yourself out." Oh, he's just so magnetic and really sweet and we had such a good time. And I look like I'm on some other planet with that big upside down triangle orange wig.

Q Did you like the medley? I always think that medleys are things people do in lounges and Las Vegas.

A Well, it's a bit jarring to go from "Young Americans" to "Song Sung Blue" to "Da Doo Ron Ron" to "Wedding Bell Blues" and then about a dozen other songs ...

Those songs don't go together in any universe! I just wanted to do "Young Americans."

Q But you're both sincere and engaged and having a great time. It's so much fun to watch.

Q Have you learned anything about yourself by writing it?

Q You knew everything? You're that self-aware?

A I think I am. You remember things that are not things you think about all the time. And you think, "Do I want to put that in there?" But if you're going to write something like this, you're only going to do it once. At least, I am. I have to tell you something. I could have done this memoir in volumes. But it's going to be one big book that you're going to need a friend to help you pick up.