Final pitches made against, for state road tax 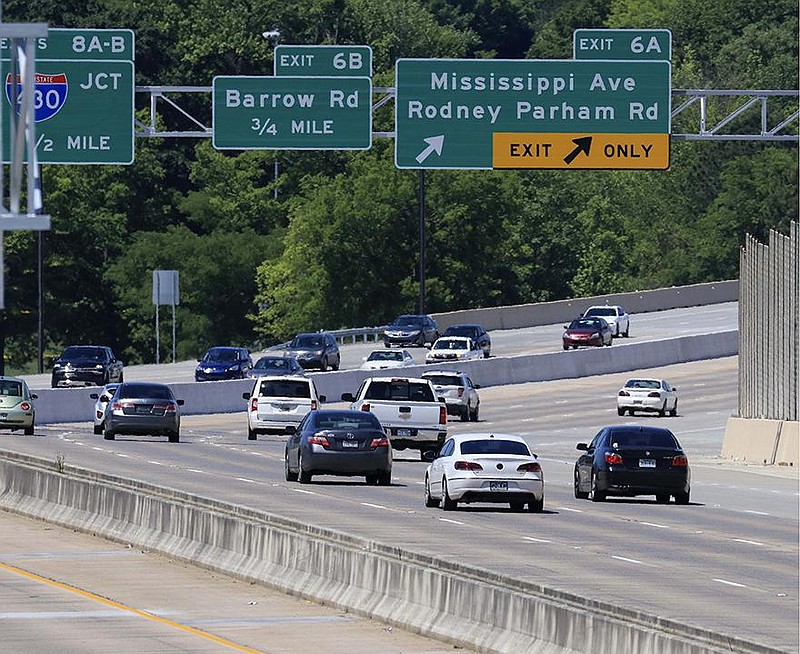 Cars travel along recently widened stretch of Interstate 630 Tuesday April 21, 2020, in Little Rock. The Arkansas Department of Transportation has lane closures planned between 8:00 p.m. and 6:00 a.m. through Thursday night on the portion of I-630 between Baptist Health Drive and University Avenue for the placement of permanent pavement markings. (Arkansas Democrat-Gazette/Staton Breidenthal)

Supporters and foes of a proposed constitutional amendment that would permanently extend the state's 0.5% sales tax for funding highways, bridges and local roads rallied their troops Monday, the first day of early voting.

The proposed constitutional amendment is Issue 1 on the Nov. 3 general election ballot.

Gov. Asa Hutchinson and the Vote for Roads, Vote for Issue 1 committee -- chaired by Arkansas Trucking Association President Shannon Newton -- are the leading proponents of Issue 1.

The proposal would make permanent the tax that voters approved in November 2012 for a 10-year period, which is Amendment 91 to the Arkansas Constitution. Food and food ingredients are exempt from the tax.

If voters approve Issue 1, state officials project the state Department of Transportation would receive about $205 million a year, while cities and counties would each get about $44 million a year for their roads.

"We'll be working very hard from this day forward to make sure we get out the vote, but most importantly that people understand that this is a way to fund highways into the future in Arkansas [and] improve our roads and our bridges without raising taxes," the Republican governor said.

"We cannot complete this mission without passing Issue 1," Hutchinson said.

Attorney General Leslie Rutledge said she's a conservative Republican, but Issue 1 is not a partisan issue.

"We've got Democrats, we've got Republicans, we've got people across the aisle, independents that are supportive of this issue," she said at the news conference in North Little Rock.

"We have ask ... friends in Central Arkansas when you put your kids on a school bus or you think about your grandkids getting on that school bus, do you want them riding that bus on the most dangerous, worst bridges and roads in Arkansas? No, you want them driving on the safest and the best roads in the state of Arkansas, so we need to vote yes for the best roads in Arkansas," Rutledge said.

The No Permanent Tax, No on Issue 1 committee -- chaired by Americans for Prosperity's Arkansas Director Ryan Norris and former state Rep. Jonathan Barnett, R-Siloam Springs -- are among the proposal's leading opponents.

"But this one in particular is misdirected and inefficient in the sense that traditionally infrastructure, highways have been financed with mechanisms that are like user fees, car registrations, gasoline taxes, diesel taxes, things like that, and the link is pretty tenuous between a sales tax and the users of highways and roads," Pakko said in an interview in Little Rock at a rally of the coalition opposed to Issue 1.

"So just on the just basic principle that when you can assign the cost of an infrastructure to its users, you should, and the sales tax is regressive," he said. "It's way too high."

The other part of Hutchinson's $300 million-a-year highway plan is Act 416 of 2019, which the Legislature and the governor enacted in the 2019 regular session.

Act 416 -- sponsored by Sen. Terry Rice, R-Waldron -- created a wholesales sales tax on gasoline and diesel; increased registration fees on hybrid and motor vehicles; and diverted casino tax revenue beyond $31.2 million each fiscal year to the state Department of Transportation and guarantees the department a minimum of $35 million each fiscal year from the casino tax, the state's restricted reserve fund and other sources.

State officials project that Act 416 would raise about $95 million a year more for the Transportation Department and about $13 million more a year apiece for cities and counties to spend on roads.

Since 2013, 31 states and the District of Columbia have enacted legislation to increase gas taxes, said Mick Bullock, a spokesman for the National Conference of State Legislatures.

Funding for the Arkansas highway system totaled about $1.6 billion in fiscal 2019, which ended June 30, 2019. About 47% came from the federal government and the other 53% came from the state, said Randy Ort, a spokesman for the Transportation Department.

Arkansas has the ninth-highest state sales tax at 6.5% as of July 1, 2020, according to the Tax Foundation.

California's sales tax of 7.25% leads the nation. Mississippi, Tennessee, Indiana and Rhode Island are tied for second with a sales tax of 7%.

Norris said Arkansas has the nation's second-highest average combined state and local sales tax rate at 9.53%, lagging only Tennessee's 9.55%, based on information from the Tax Foundation.

Asked about tax opponents who argue the sales tax is regressive and too high and the state should explore other options, Hutchinson said people who are concerned about the sales tax being too high need to recognize Issue 1 wouldn't increase the state's sales tax.

"Over the last eight years, our Legislature, [then] Gov. [Mike] Beebe and myself have worked hard to eliminate the grocery tax on our sales and that's happened, so there has been some benefit to lower-income workers by reducing that sales tax burden on them," he said.

"And then secondly, we've also reduced our income tax," Hutchinson said. "We started at 7% and we are going to be down to 5.9% with the [top] individual income tax rate. We are managing our tax rate in Arkansas, so that we are reducing the burden, but then also allowing us to continue to invest in infrastructure, a unique opportunity for us."

In the 2011 regular session, Barnett and Sen. Bill Sample, R-Hot Springs, sponsored the joint resolution to refer to voters in the 2012 general election the proposed amendment to create the 0.5% sales tax that would last for a decade.

The proposal saw 58.2% vote for it and 41.8% vote against it, according to the secretary of state's website.

Barnett said in an interview last week that he is going to vote against Issue 1.

He said he made a commitment to the House of Representatives and Senate that the half-cent sales tax for highways "was a temporary 10-year 'sunsetted' tax."

"It's just hard for me to conceive that he would oppose this, as badly as it's needed," Sample said in an interview.

"I was there in 2011," Wardlaw said. "He's right. [The half-cent sales tax] was a temporary fix for the four-lane grid system.

"But it is now going back before the public and it is going for operations and maintenance of our current system," he said. "The need we have now is different than the need then."

Pulaski County Judge Barry Hyde, a Democrat, said Monday, "Those who are opposing Issue 1 seem to be suggesting that its defeat would put an end to highway projects that are currently underway [and] folks, that's simply not the case.

"In Pulaski County, opponents to Issue 1 have you believe that letting the transportation tax lapse would put an end to the I-30 Crossing project. Again, that is not the case," Hyde said. "Voting against Issue 1 is a vote against the future needs of our infrastructure and our ability to safely maintain our roads, our bike trails, streets, sidewalks, drainage systems [and] bridges in Pulaski County and throughout the state."

The No Permanent Tax, No on Issue 1 committee's report for September wasn't available on the Arkansas Ethics Commission's website as as of early Monday evening.