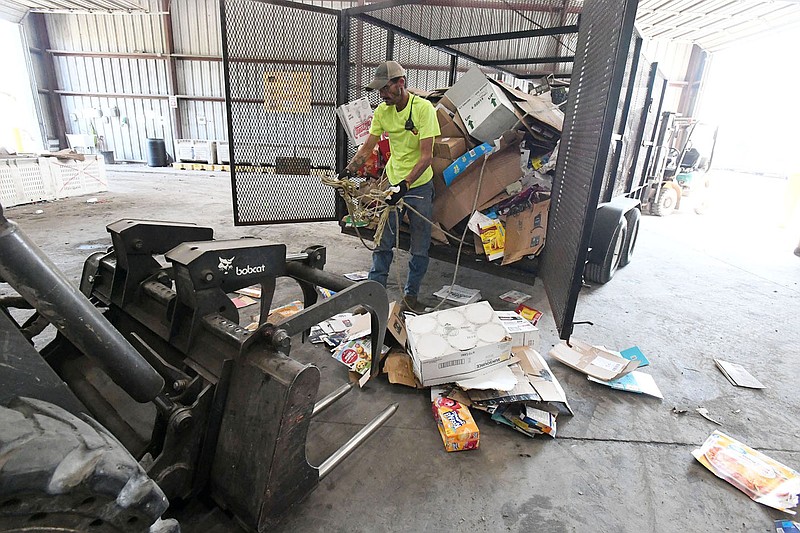 Mark Thomas of Lincoln unloads a trailer of cardboard Wednesday Oct. 21, 2020 at the Boston Mountain transfer station/recycling center in Prairie Grove. The Sustainability Consortium of the Northwest Arkansas Council released a report Wednesday saying the region has invested well in recycling, but more needs to be done to increase volume, coordinate the flow and create local markets for recycled material. Visit nwaonline.com/201019Daily/ for more images. (NWA Democrat-Gazette/J.T.WAMPLER)

FAYETTEVILLE -- Northwest Arkansas should expand recycling to keep more of the entire process in the region, from collection to companies that buy the products, according to a report released Wednesday by the Northwest Arkansas Council.

The effort will require collaboration among more than 30 cities, two solid-waste districts and hundreds of private haulers and companies, but it can be done, according to the report.

The Sustainability Consortium and the Northwest Arkansas Council spent a year studying recycling in the region to come up with recommendations to keep more waste out of landfills. The Walmart Foundation paid for the study that included Benton, Washington and Madison counties. The cost of the study was not provided.

The Sustainability Consortium is a global organization that works with companies in the supply chain. The Northwest Arkansas Council is an economic development organization that collaborates with cities, schools and nonprofits on a number of issues.

The region needs better data on what recyclable material is collected and where it goes, said Sarah Lewis, director of innovation for the consortium. That way, everyone involved can figure out what facilities are needed and which companies would benefit, she said.

A regional coordinator is necessary to get cities, solid-waste districts and private haulers on the same page, according to the report. Right now, most cities report what materials and how much they collect to the Arkansas Department of Environmental Quality on handwritten forms, according to the report. Private haulers aren't required to report, although some do so voluntarily.

Fayetteville runs its own recycling program, while Springdale, Rogers and Bentonville contract their services to private companies.

"The first step for this community is to get coordinated, get organized and improve data collection," Lewis said. "Through that, you build transparency. From there, you look at what kind of end markets we can create."

The participants in the yearlong study developed an online form that all cities, haulers and solid waste districts could use to report recycling to the state, Lewis said. The Northwest Arkansas Council intends to work with the state to test the form, the report says.

Contracts between cities and private haulers need to be stronger, according to the report. The report uses Gravette's contract with private hauler Republic Service as an example of a small town with a service catered to its needs.

Gravette Mayor Kurt Maddox said his city saved residents money by having a drop-off recycling site, rather than curbside service. The result is residents who frequently use the service, he said. Materials are hauled to the Benton County Solid Waste District.

The city has flexibility to change the arrangement and didn't accept a blanket contract without negotiating, Maddox said.

The market needs clean, sorted materials now more than ever, especially since China stopped buying recyclables from the United States in 2018 because of high rates of contamination, according to the report.

Only Prairie Grove, Siloam Springs and Fayetteville have hand-sorted recycling programs, resulting in far less contamination, according to the report. Other Northwest Arkansas communities have single-stream systems with automated sorting.

Facilities should be expanded throughout the region to keep the flow sorted and clean, according to the report.

A unified approach to educate residents on what can be recycled and how also is key, said Robyn Reed, director of the Boston Mountain Solid Waste District, which serves Washington and Madison counties. Many people try to recycle items, such as plastic yogurt cups or deli containers, not knowing there is no market to accept them, she said.