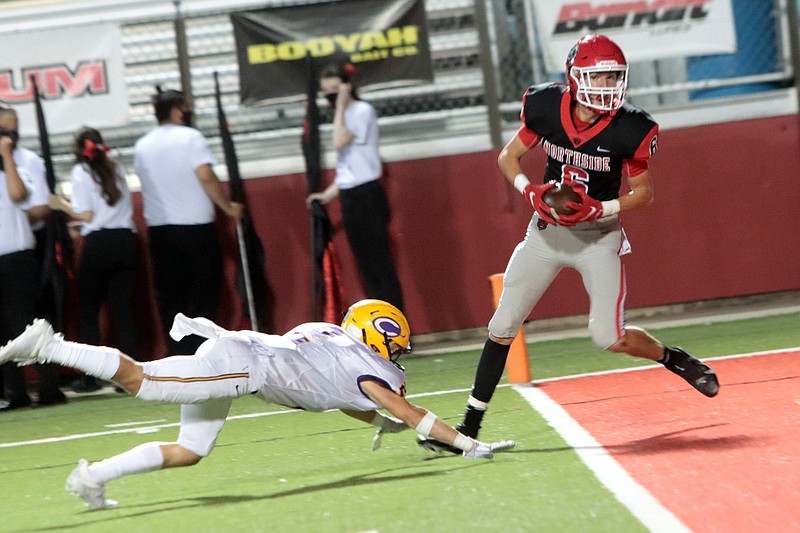 Fort Smith Northside’s Walker Catsavis (right) is excelling at receiver in his first year on the varsity squad. (Special to the NWA Democrat-Gazette/Glenn Gilley)

FORT SMITH -- To those outside the program, Walker Catsavis' breakout season for Fort Smith Northside junior has appeared to come out of nowhere.

But to those inside the program, it hasn't been a huge surprise at all. Catsavis, a 6-foot-4, 165-pound junior, last season guided the 5-2 junior varsity team mostly as a quarterback. This season he has made the most of his primary role of wide receiver, catching 23 passes for 322 yards and four touchdowns so far for the Grizzlies (4-2, 1-2 7A-Central).

"We had an idea we could expect some production out of him, but maybe not to what he has done to this point," Fort Smith Northside coach Mike Falleur said. "He does a good job catching the football and has blocked well. We are excited about him. He is a hard worker and he wants to be a good player.."

"He is a kid when I got here, all the offensive coaches told me he is the real deal," Kendrick said. "He kind of got lost in the mix because of the talent and speed of the returning guys. He was a young sophomore last year that showed a lot of promise when I looked at film. He is big, tall and lanky.

"He stood out on film. He made some great plays for the JV team last year."

Catsavis transitioned to the varsity level quickly. He didn't have a catch in the team's scrimmage to start the year, but he was then able to find success in the regular-season opener. He caught six passes for 95 yards in a 35-7 win against crosstown rival Fort Smith Southside.

He hasn't disappointed since that game for the Grizzlies, transforming himself to be the team's go-to receiver for quarterback Dreyden Norwood.

"He didn't get a catch in the Bentonville West scrimmage and never said a word," Kendrick said. "He came back to work and continued to work hard. He then had a great first game of the regular season against Southside. That was his coming-out party. He has been a consistent weapon for us from that point. He has stepped up and his game keeps getting better and better."

Catsavis still points back to the season-opening game against Southside as his validation he could excel under the Friday night lights.

It didn't hurt that his first catch went for a big gain, either.

"It was a huge confidence-booster," Catsavis said of the Southside game. "It really made me feel I could come out here and really compete. It was a great game. Once you get that confidence, it makes things easier. My first catch went for 40 yards. I knew after that I could make plays for my guys."

Catsavis' talents at the wide receiver position have been greatly needed with injuries and the impact of the coronavirus at the position. Northside has missed senior wide receiver Tyheen Prosise, who led the team in receiving yards last year, because of injury most of the season after being injured in the second game.

With a depleted receiving corps that was limited to about one-third of the normal numbers, Catsavis has emerged.

"What has hurt us at the receiver position has been some kids have gotten injured and have been missing because of quarantine," Falleur said. "Some have been here for two weeks but then miss the next two weeks. He has been here the whole time and been consistent for us. That has put a lot of added pressure on Walker and the other receivers. They have stepped up big time for us."

Catsavis has thrived being a consistent threat for the Grizzlies, but he feels when the team is able to put it all together and get healthy, the unit will really take off.

"We've had a lot of people out," Catsavis said. "I want to be there for my team and be productive on the field. I feel like I've done a good job of that. But once we get everybody back, we will be really excited because they will have to cover everybody. It's going to be a scary sight."

Kendrick has found a way to get Catsavis involved in the offense in different ways. He has taken the top off defenses with his speed for touchdowns. He also has been the target of receiver screens at the line of scrimmage.

As the backup quarterback, he has shown off his arm as well, throwing for a touchdown this year on a trick play.

"He has made some big plays," Falleur said. "You can be impressed with his touchdowns, but he has made some critical catches that didn't go for scores to keep us from losing football games. He has been very productive."

Catsavis caught a pair of touchdowns in a wild 33-30 win on the road against Fayetteville as well. He got the offense going, scoring the first touchdown of the game on a 25-yard pass in the first half. He also scored the game-tying touchdown in the third quarter on a 16-yard touchdown pass before Slate Stanton kicked a game-winning field goal in the final seconds. Catsavis finished with nine catches for 88 yards against the Bulldogs.

The coaching staff loves what they see from Catsavis off the field, being a student of the game and even getting extra work outside of practice. Kendrick said it was easy to learn early how much football means to Catsavis and how willing he is to work on his craft.

"He is consistent, which I love about him," Kendrick said. "He is about as consistent a player as I have ever coached. He comes to practice every day with a strong work ethic. His love of the game is awesome. He is a coach's kid. As good as he is in football, he is as good in basketball. He is just an all-around athlete. He probably knows this offense better than anybody outside the coaching staff."

Although Catsavis didn't play much for the varsity team last season, he has picked up right where he left off. The only stats he recorded last year was a big play for a touchdown. In a blowout game early in the season a year ago, Catsavis got in the game and rushed for a 65-yard touchdown.

"We were beating Van Buren pretty good and they put me in," Catsavis said. "I just broke it and ran it. The offensive line blocked it great and opened up a big hole for me. I just wanted to make the most of my opportunities when I get them. I want to help the offense."

This has been a season Catsavis and Norwood have anticipated for a long time. The duo goes all the way back to their playing days against each other with the Fort Smith Boys & Girls Club.

Catsavis said is just glad Norwood, a four-star recruit who is committed to Texas A&M and is considered by some recruiting services the top player in the state, is finally on his team.

"I've known him my whole life," Catsavis said of Norwood. "We have pretty good chemistry because of that. This is a season we have been looking forward to since fifth grade. We played together on a boys' basketball team when I was in fifth grade. Every year after that, we were opponents. It's been great to be on the same team again. Things are easier when he is on my team and not the other."

Seeing Catsavis flourish this season has not been a surprise to Norwood.

"I knew he was going to have a big season," Norwood said. "I've grown up with him for a long time. I've known about his abilities for a long time. Walker has been so good for us. And once we get everybody together, we feel like we can do some special things."

Catsavis, long and lanky, has sneaky-fast speed that some Grizzly fans have compared to another former Grizzly in Matt Jones.

Norwood is having his best year as a quarterback. He split time at quarterback last year but has already eclipsed his numbers from last year in passing yards. He has completed 60 of 116 passes for 834 yards and 9 touchdowns this season after finishing with 538 passing yards and 6 touchdowns a season ago. Norwood has also rushed 69 times for 293 yards and four touchdowns for the Grizzlies this year.

The offense hasn't been perfect for Northside this year, hurting itself with turnovers and other miscues, but Falleur said he likes the progress the unit has made this year being run under Kendrick, who has won state titles as a head coach and as a coordinator.

"With so much time missed because of covid, everybody is kind of just now understanding at a high level what we want to do," Falleur said. "Coach Kendrick has done a good job and is a great worker. He fits right in with our staff because every coach out here does a great job with their roles. I'm tickled he is here."

The missed time because of covid-19 along with bringing in new schemes, Kendrick admits has been a challenge.

"This is a different year than we have ever had with covid," Kendrick said. "With all the time we missed in the offseason and missing some time in the regular season, we are down two to three thousand reps on offense from a normal year. We are behind. But we are improving. We are finding who we are and what we want to do. Deep down, we are not who we want to be. But we are who we need to be right now."

It has been a bounce-back year for Northside, which has already passed its win total from last year. The Grizzlies had a stretch late in the season where it lost four consecutive games. In three of those games, they lost by seven or fewer points. In the other game, they had a halftime lead.

Catsavis said he takes a great deal of pride in having a part in the turnaround.

"It means everything wearing this Northside jersey," Catsavis said. "I grew up wanting to play for this team. To be playing and doing well makes it that much more special. This has been a special year for me and this team. And we feel the sky's the limit for us.

"We can do special things the rest of the season."

NOTABLE Has emerged as a go-to receiver for Northside with 23 catches for 322 yards and four touchdowns. … Is the team’s back-up quarterback and has passed for a touchdown this season. … Also plays for the Northside boys basketball team.