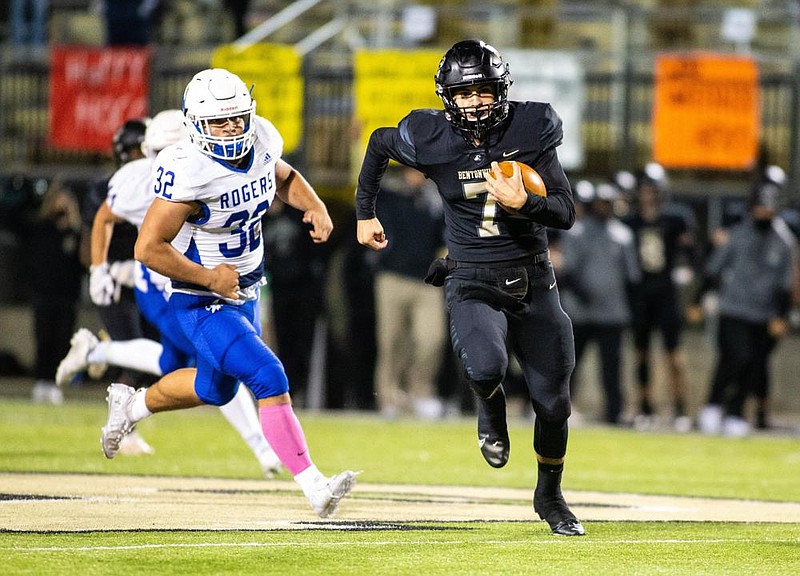 Andrew Edwards (right) of Bentonville runs for a 63-yard touchdown — one of six scores the senior quarterback had a hand in Friday — as the Tigers broke a single-game school scoring record in a 74-21 victory over Rogers at Tiger Stadium in Bentonville. More photos at arkansasonline.com/1024rogers/ (Special to NWA Democrat-Gazette/David Beach)

BENTONVILLE -- There was already a "14" on Bentonville's side of the scoreboard by the time Andrew Edwards led the offense onto the Tiger Stadium field Friday night.

The senior quarterback then went to work and had a hand in six touchdowns as the Tigers broke a single-game school scoring record and celebrated homecoming with a 74-21 blowout over Rogers during 7A-West Conference action.

Josh Ficklin returned the opening kickoff 95 yards for a score, and Ethan Estes returned an interception 25 yards for a touchdown on Rogers' first offensive play to give Bentonville (8-0, 5-0) a 14-0 cushion with only 21 seconds off the clock.

"When I did get on the field, I thought we would put more points on the scoreboard, and that's what we did."

Bentonville appeared to need every point it could muster after the two teams combined for 49 points in just the first 11 minutes. Rogers quarterback Christian Francisco bounced back from that interception to throw two touchdown passes, and his 13-yard touchdown run with 1:26 left in the first quarter pulled the Mounties (4-2, 1-2) within 28-21.

Rogers, however, never scored again, and its special teams made a pair of critical mistakes, which helped Bentonville break its previous high of 70 points in a 2017 game against Rogers Heritage. The Tigers partially blocked one punt, then Estes picked up another short punt and returned it 18 yards to set up another score.

"Listen, we knew going in that Rogers -- with that quarterback triggering their offense -- is dangerous," Bentonville Coach Jody Grant said. "They're good, and we knew that going in. They've been effective offensively. They scored 35 points on us last year, so our kids knew it and were aware of it. It looked like we were in for a shootout.

"We just got to the point where we were covering better. It wasn't a whole lot of an adjustment thing. There were some tweaks, but for the most part our kids got in better position and played."

Edwards accounted for three touchdowns in the first quarter, including a 63-yard run with 42 seconds left that allowed Bentonville to begin pulling away. He then threw touchdown passes of 10 yards to Jackson Gilbreth and 51 yards to Cooper Smith in the second quarter to give the Tigers a 53-21 halftime cushion.

His only offensive play in the second half was a 19-yard touchdown pass to Smith after Ty Riley picked up Bentonville's second interception.

"I was actually suggesting some new plays," said Edwards, who completed 9 of 12 passes for 163 yards and added 91 yards on just 6 carries. "I never really do that, but I saw how the defense was lining up, so I suggested them. We did try some new ones."