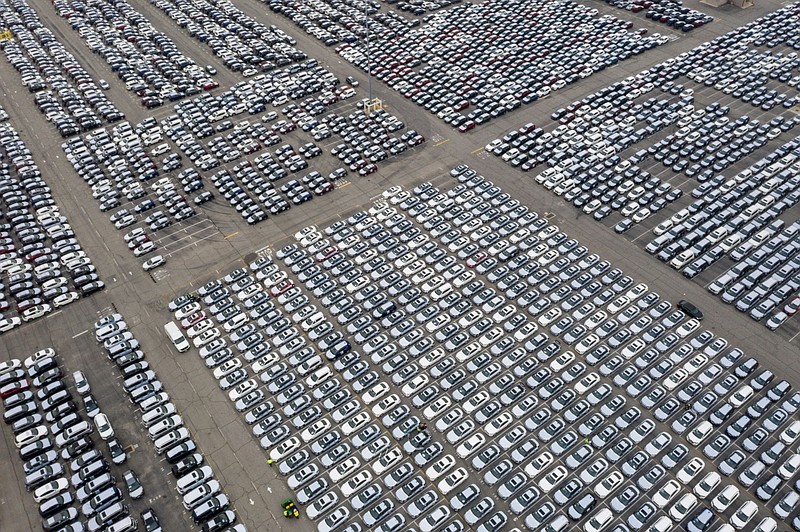 New vehicles parked for delivery at the Port of Los Angeles in Wilmington, Calif. MUST CREDIT: Bloomberg photo by Bing Guan

Now, facing a potential Joe Biden presidency that promises more onerous policies on climate change and other issues, automakers are being urged to come together in defense of common interests.

"The industry is more divided than I've seen it in my lifetime," Rep. Debbie Dingell, D-Mich., who has endorsed Biden, said in an interview. "There's competitive issues that drive that, but if they're not together on those issues, they're going to be in trouble."

A Biden administration would be likely to restore aggressive Obama-era emission targets that Trump has tried to roll back. In addition, the former vice president likely would put more of Washington's focus on electric and autonomous cars going forward to ensure American autoworkers build "the vehicle of the future." An extension of the $7,500 per EV tax credit is more likely if Biden becomes president, according to Bloomberg Intelligence.

Conversely, four more years of Trump would see a continuation of efforts to roll back auto mileage standards and revoke California's power to issue its own standards.

"As always as we go through an election period, we've got to sure we're paying attention to what might change and what might stay the same and be a resource," said John Bozzella, president and CEO of the Alliance for Automotive Innovation. "Our role is to be a resource and educate, and we want to be a resource to every candidate."

As much as anything, the carmakers say they want certainty on matters such as trade and mileage rules. Detroit has been apprehensive about asking for direct handouts in the midst of the pandemic. Instead, it has asked for targeted measures like declaring dealerships essential services during the initial shutdowns and loan guarantees.

"Here's the reality: After the 2008 loans to the industry, nobody want to talk about autos for a decade," Dingell said. "It was a brutal time. There were a lot of tough conversations."

The election comes at a difficult time for automakers. Market research firm Cox Automotive forecasts the industry will finish 2020 having sold only 13.9 million cars in the U.S., a 16% drop compared with 2019.

A Biden win would likely quickly change the politics of the fight over levels of miles per gallon of gas that automakers are required to meet, said James Blatchford, a Bloomberg Intelligence analyst who focuses on energy and transportation. The dispute remains tied up in court as the president campaigns for a second term.

"Some of that could be addressed quite quickly if Biden wins, I think, but comes with a trade-off -- higher mpg standards," Blatchford said. "Because certainty is so critical and a unified standard the priority for everyone, I wouldn't envision the recent differences being long-lasting."

Trump's trade wars and tariff threats on imported autos and parts -- which the Biden campaign has criticized -- led to a lobbying shakeup for the auto industry in Washington this year.

That's when the former Alliance for Automobile Manufacturers, which represented both foreign- and domestic-owned carmakers, merged with the Association of Global Automakers, which represented foreign-owned automakers. The reformed group is the Alliance for Automotive Innovation, and it now focuses primarily on the push by carmakers to develop self-driving cars and steers clear of trade issues that have dominated the Trump era.

Foreign-owned carmakers which were part of the Association of Global Automakers banded together to create a new lobbying group known as Autos Drive America. Only the American Automotive Policy Council, which lobbies for domestic carmakers, remains unchanged.

"What really animated our combination is the companies were focused on making sure the industry is speaking with one voice," said Bozzella with the Alliance for Automotive Innovation. "That's all-important, especially in an era of enormous policy uncertainty."

Bozzella said he thinks the auto lobbying groups are set up for success in their realignment no matter who wins the election, noting that his group is a "unified trade association that represents 99% of all new sales."

That's because the auto and technology sectors are becoming more intertwined than ever before as carmakers and Silicon Valley firms race to develop self-driving cars, he said.

Auto parts suppliers are agnostic on which technologies should be used to build cars in the future, but they do want certainty from Washington on auto emission rules, said Ann Wilson, senior vice president for government affairs of the Motor and Equipment Manufacturers Association.

"We've always supported a wide range of technology so consumers can go into a dealership and see different vehicles to meet their needs," Wilson said. "Suppliers are very much for performance-based standards. Just tell us what emission levels you want and suppliers can figure out."