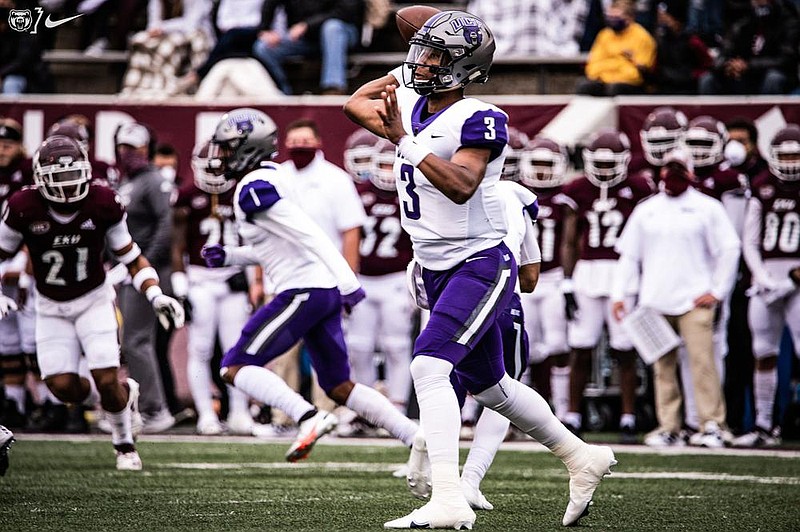 Central Arkansas quarterback Breylin Smith passed for 320 yards and 2 touchdowns and also rushed for a score during the Bears’ loss at Eastern Kentucky on Saturday. (Photo courtesy of the University of Central Arkansas)

There'd be no comeback magic for the University of Central Arkansas on Saturday afternoon.

Instead, the late wizardry belonged to Eastern Kentucky.

Backup quarterback Dakota Allen found wide receiver Matt Wilcox for a 21-yard touchdown with six seconds left to lift the Colonels to a 31-28 victory over the Bears at Roy Kidd Stadium in Richmond, Ky.

The win capped a whirlwind fourth quarter that saw UCA (3-4) battle back from a 10-point deficit only to watch Eastern Kentucky rally.

The Colonels (2-4), who lost on a last-second field goal to Troy last week, trailed 28-24 with 1:21 remaining after a 1-yard touchdown run for UCA quarterback Breylin Smith.

They moved 77 yards in eight plays to record the winning score. The drive was aided by a pair of personal foul calls against the Bears, the latter of which was a roughing-the-passer penalty that put Eastern Kentucky deeper in UCA territory with 13 seconds showing.

"On that final drive, you get 30 yards in penalties that really gave them the opportunity to keep the drive alive," UCA Coach Nathan Brown said. "Credit goes to Eastern Kentucky, though. They had poise, they stayed with it and made big plays in the end.

"We've become so accustomed to making those big two-minute drives and the defense being on the field and making the plays late to make it happen. It just caught up to us [Saturday]."

Allen, a redshirt junior who came on for injured starter Parker McKinney on the next to last play of the second quarter, completed 9 of 14 passes for 85 yards and the game-winning touchdown pass for the Colonels. He also led the team in rushing with 59 yards on 9 carries, adding a 7-yard scoring run in the final period.

Smith was 30-of-45 passing for 320 yards for UCA, which had trailed in the second half of each of its three wins this season. Wide receivers Lajuan Winningham (9 catches, 103 yards) and Tyler Hudson (7 catches, 106 yards) each had scoring receptions.

But Smith also threw a pair of first-half interceptions, both of which the Colonels turned into touchdowns to help them take a 17-7 lead into halftime.

McKinney was forced to miss the second half after hurting his shoulder with three seconds left in the second quarter. He had completed 15 of 20 passes for 216 yards and 2 touchdowns prior to the injury.

UCA had a chance to grab the first lead after special-teams player Leandre Rucks recovered a fumbled punt by Eastern Kentucky returner Allante Leapheart with 5:06 left in the first quarter. The Bears appeared to have a touchdown on the next play when Hudson took the ball on a reverse and fired a 20-yard pass to running back Marshun Douglas, but UCA was whistled for an ineligible player down field penalty.

The Bears moved inside the Colonels' 6 and had a first and goal when Smith was intercepted by Eastern Kentucky defensive back Joseph Sayles when his pass was tipped.

The Colonels then went 86 yards in nine plays and scored when McKinney found tight end Malik Owens across the middle for a 7-yard touchdown with 13:28 left in the second quarter.

Eastern Kentucky reached UCA's 6 before defensive back Cameron Godfrey pounced on a fumble after linebacker Darin Davenport stripped the ball from McKinney. The Colonels got the ball back three plays later when defensive back Kmare Carey intercepted Smith and returned it 18 yards to the Bears' 45.

McKinney then tossed a 19-yard touchdown pass to tight end Ethan Bradds to finish off a four-play drive to put Eastern Kentucky ahead 14-7. The Colonels added a 37-yard field goal from Alexander Woznick to take a 10-point lead into halftime.

UCA scored early in the second half. After forcing a three and out, the Bears got an 18-yard punt return from Hudson to move into Colonels' territory and later scored on Kierre Crossley's 1-yard run with 9:59 left in the third quarter to cut their deficit to 17-14.

Allen settled in by making plays with his feet. The Colonels went 93 yards in 12 plays on a drive that took more than six minutes. Allen ended the march with his touchdown run with 12:15 remaining in the game.

UCA scored twice in a little over three minutes to regain the lead. Smith's 4-yarder to Winningham cut Eastern Kentucky's advantage to 24-21, and his short scoring run on UCA's next possession gave the Bears their first lead of the game.

But this time, UCA couldn't find a game-clinching play.

"We just left too much time on the clock when it was all said and done," Brown said. "They made plays on their drive. We couldn't get the quarterback down on that final drive on defense, gave him a chance to stand in there and make some good throws. Obviously, the penalties hurt us.

"We'll learn from it. We're trying to push to be a great football team, but we've still got a ways to go."