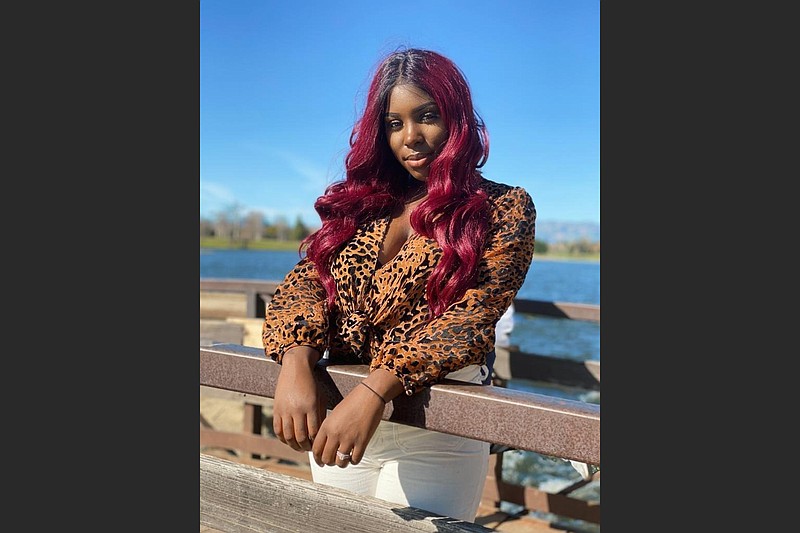 Sarah Palafox, an Black woman who sings regional Mexican music, poses in Moreno Valley, Calif. Palafox, who goes by the name Sarah La Morena, was born in Southern California but raised in the Mexican state of Zacatecas. (Silent Giant Entertainment via AP)

RIO RANCHO, N.M. — The Instagram post was intriguing even before people heard her voice. Sarah Palafox, a Black woman, held an iPhone while standing in front of mariachis. When users turned on the volume, they heard a woman belting out a heartbreak interpretation of Jenni Rivera's "Que Me Vas A Dar" in perfect Spanish of Mexico's Zacatecas. Instagram users said the short clip made them cry. Others demanded more.

But most wondered: Who was this woman with a voice like the late Tejano star Selena? And what's her story?

Palafox, a Black woman raised by a Mexican immigrant family, has generated excitement online with her versions of regional Mexican music.

Born in Southern California but raised in the Mexican state of Zacatecas, 23-year-old Palafox, who goes by the stage name Sarah La Morena, has sparked emotions following a series of viral videos on social media. The clip of Palafox singing with mariachis spawned a half of million views on Instagram and another 200,000 on Twitter. Other videos of her singing banda — another form of regional music from Mexico's southwest coast — also have been shared thousands of times. (She is working on an album.)

However, as Palafox has been stroking a frenzy with her voice, she has also been the target of a backlash online over her love of Mexican music. A few Black social media users accuse of her being ashamed of her blackness. Some Hispanic users sling racial slurs and accuse her of appropriation. The insults come in English and Spanish.

Palafox said the scorn is similar to what she faced after her family returned to Southern California when she was in middle school. That has led to bouts of depression and a suicide attempt in 2018, she said.

"Just the fact of how I was brought up, and what I was born into, and what I got raised in, I mean, I have like the best of both worlds," said Palafox, who sports a Selena tattoo.

On social media, Palafox has shared her story of being born addicted to drugs and thrust into a foster care system after authorities took her away from her biological mother, a Black woman. A devout Christian family from Mexico offered to foster her but soon fell in love with her. They officially adopted her and moved to Zacatecas, where Palafox learned to milk cows and care for horses.

When the family returned to the United States, kids in school didn't know what to make of Palafox, a Black girl who spoke no English and saw herself as Mexican. Palafox, who began singing in church, threw herself into music, specifically, the music of her parents' homeland. "That kind of music just brings back a lot of memories," said Palafox, of Moreno Valley, Calif.

Today, as a mother of two and a recently signed artist to California-based Silent Giant Entertainment, Palafox is focusing on the positive responses to her music as the U.S. faces a racial reckoning over police shootings and systemic racism.

For years, a few Black artists have tried to sing in Spanish to reach Hispanic fans in the United States and abroad. For example, Nat "King" Cole recorded three Spanish-language studio albums in the late 1950s and early 1960s. His "Cole Español" album used orchestral music recorded in Havana and he added his vocals out of California, but it was clear that Spanish wasn't his first language.

Other Black artists, such as Beyonce, have recorded Spanish versions of their popular hits at the time. Her 2006 "Irreplaceable" called "Irreemplazable" is sung entirely in Spanish. Michael Jackson also recorded a Spanish-language version of "I Just Can't Stop Loving You" called "Todo Mi Amor Eres Tú."

But rarely has a Black artist embraced and authentically captured Mexican regional music like Palafox, according to Alexandro Jose Gradilla, a Chicana and Chicano Studies professor at California State University, Fullerton.

"She takes authenticity to a whole new level. Not only is her Spanish better than most Latinos, she identifies with a village in Zacatecas. She is Mexican and this music is hers," Gradilla said.

Gradilla said Palafox is facing a backlash from some because her music represents "Black-Brown love" and highlights how close Mexican American and Black communities have been living together for decades. "And if you focus on Black-Brown love, it destroys how we look at race in the U.S.," Gradilla said. "That's why her music brings some of us to tears."

Palafox said she had more music projects but declined to give details. She would only say the music will be different and she's not listening to critics who tell her she shouldn't be singing regional Mexican music.