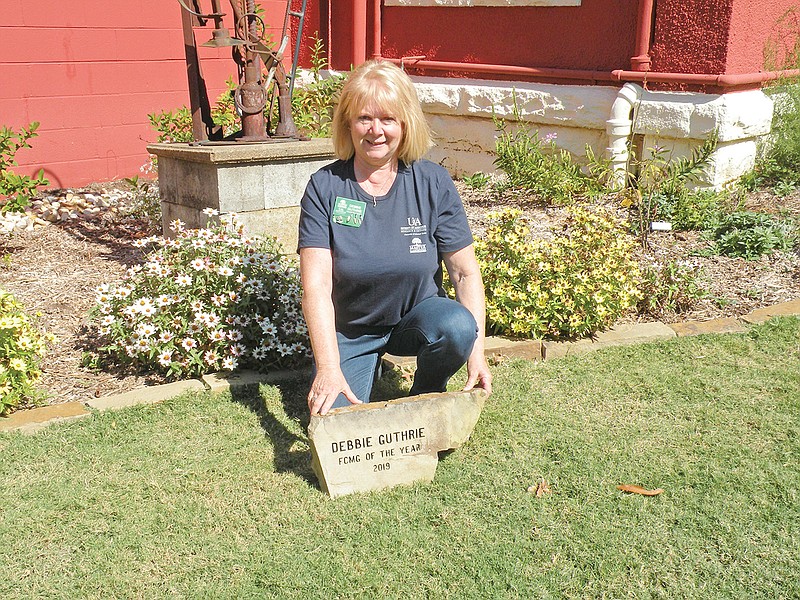 Debbie Guthrie of Conway joined the Faulkner County Master Gardeners in 2016, the year she retired.

“I retired the first of January and saw an ad in the paper about Master Gardeners,” she said. “I told myself, ‘You could do that,’ and I decided to give it a try.

“Master Gardeners is like a black hole — it just sucks you in,” she said, laughing.

Guthrie, 63, was recently named the 2019 Faulkner County Master Gardener of the Year.

“I was very surprised,” she said. “I was thrilled. I was trying not to cry when they made the announcement.”

Guthrie served as first vice president in 2019 for the organization and moved into the role of president for 2020. She has worked on various committees — the office support committee for the Faulkner County Cooperative Extension Service, which oversees the local volunteer group of Master Gardeners; the field trip planning committee; the social committee; the training committee; and the coordinator training committee. She also worked on the Faulkner County Fair education booth and the Master Gardeners Executive Board. Guthrie worked on the annual plant sale in 2019 and at the Legacy Gardens as well, accumulating 458 sanctioned volunteer hours and 187 education hours during the year.

“The Legacy Gardens is a big job,” she said.

The Legacy Gardens is one of the largest dirt projects of the Faulkner County Master Gardeners. Located on the grounds of Antioch Baptist Church off Interstate 40, the gardens were built in the shape of a butterfly on man-made berms of soil. There are eight individual garden sections. Guthrie formed leadership roles for each section and helped create a rotation schedule, giving the volunteers a chance to work on smaller sections rather than trying to work the whole area in one day.

“Debbie is open to new ideas and very good at identifying ways to improve our program,” said Krista Quinn, Faulkner County Cooperative Extension Service agent for agriculture and adviser to the Master Gardeners.

“Her leadership skills and thoughtful planning have helped hone the organization into a more efficient machine with a more solid mission toward educating the public.

“Whether making copies, pulling weeds or conducting a planning meeting, Debbie is ready to serve the Master Gardeners program and the extension office cheerfully and enthusiastically,” Quinn said.

Guthrie grew up in St. Louis, where she lived until she moved to Chicago. She worked in management positions for the Xerox Corp. in St. Louis for 24 years, then for 10 years as a contract negotiator for The Boeing Co. in both St. Louis and Chicago. She now works part time for Arkansas Roofing Kompany in Conway.

She and her husband, Bob Guthrie, were married in 2007 and moved to Conway from Chicago in 2012. They have a blended family — he has two sons, Bruce Guthrie of Wynne and the late Marcus Guthrie, and she has one daughter, Elizabeth Boatman of St. Peter, Minnesota. Five grandchildren and one great-grandson complete the immediate family.

She said Bob comes from a large family.

“He has 12 brothers and sisters,” Debbie said. “They all live around here … Greenbrier, Damascus, Searcy, Judsonia and other places.

“I have two sisters: Linda Joslin of Cincinnati and Connie Melvin of Washington, D.C.,” she said. “My dad, Marvin Davis, 86, lives with us; my mom, Jacqueline, died in 1987.”

Bob, who retired two years ago, is also a member of the Master Gardeners.

“We do our own yard,” she said. “We have about a 1/3-acre garden on our 5 acres. We also have high tunnels for some of our vegetables — we do good in the winter.

“It took us about three years to get the high tunnels working. We’re a glutton for punishment. … We’ll try anything once.”

“It looks good and smells good, … and it comes back every year,” she said. “I raise it for the hummingbirds and other pollinators.”

Guthrie said she has learned a lot from the Master Gardeners.

“The weather is so warm down here that most things die in July and August if you don’t water them frequently,” she said.

“You don’t have to water much in St. Louis and Chicago. So that was something I had to learn about … irrigation systems, drip irrigation … things like that,” she said.

“I love Master Gardeners,” Guthrie said. “When you get a plant from a Master Gardener that’s happy in its environment, then you know it will do well in your own yard.

“We weren’t able to have our plant sale this year but are hoping to next year. We are trying an online fall bulb sale this year for members only to see how that might work.”