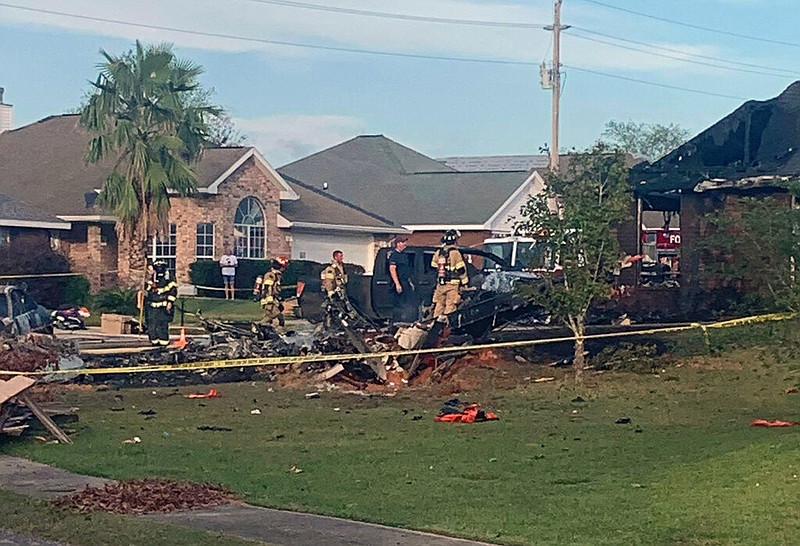 This photo provided by Greg Crippen shows the scene where a U.S. Navy training plane crashed near Foley, Ala., in a residential neighborhood near the Gulf Coast on Friday, Oct. 23, 2020. (AP / Greg Crippen )

FOLEY, Ala. — Authorities have identified the two service members who were killed when their plane crashed in a residential Alabama neighborhood.

The T-6B Texan II aircraft crashed around 5 p.m. Friday. No one was injured on the ground.

The crash happened near a Baldwin County public school when students were still on campus during an after-school program. Baldwin County Public Schools Superintendent Eddie Tyler said the crash was “a little too close for comfort.”

Garrett, of Waxhaw, North Carolina, was a student aviator for the Coast Guard. She was identified by Rear Adm. William Kelly, superintendent of the U.S. Coast Guard Academy.

Kelly said Garrett graduated from the academy in New London, Conn., in May 2019, and majored in marine and environmental sciences. She was a regimental activities officer at the academy, and competed as a middle-distance runner in track and field.

Ross, of Wixom, Mich., was identified by the Navy. She was a member of the University of Michigan at Ann Arbor’s Navy Reserve Officer Training Corps. Ross served three years with Helicopter Sea Combat Squadron 26 out of Norfolk, Va., before joining the Florida based Training Squadron Two in 2018.