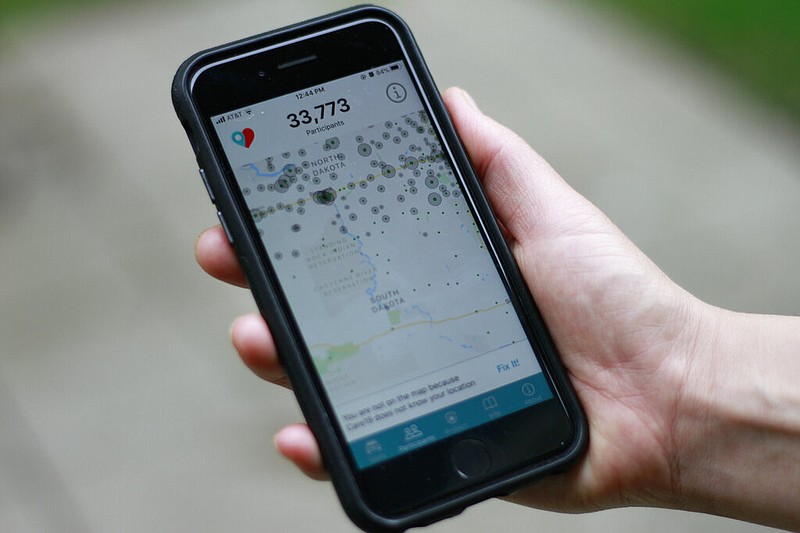 The Care19 app is seen on a smartphone screen in Sioux Falls, S.D., in this May 22, 2020, file photo. The contact tracing app, which was being pushed by the governors of North Dakota and South Dakota, is one of a number of options for states trying to determine who has had contact with people diagnosed with the novel coronavirus.

After months of practice and thousands of phone calls, Arkansas contact tracers still fail to reach hundreds of people each week who were exposed to someone with covid-19, and those numbers are growing, an Arkansas Democrat-Gazette review of public records found.

Weekly counts of people who spent time with a person who tested positive but were marked "unreachable" have more than doubled since late August, records show.

One, Virginia-based defense contractor General Dynamics Information Technology (GDIT), has said it couldn't reach 7.4% of 1,902 contacts for the week ending Aug. 29, data show. That climbed to about 12.8% of 3,869 contacts in the week ending Oct. 17.

The state's other main contact-tracing contractor, Arkansas Foundation for Medical Care (AFMC), couldn't connect with 10.1% of 2,445 contacts from the Aug. 29 week. That increased to 14% of 4,347 contacts for the week ending Oct. 17.

As Arkansas passes the milestone of 100,000 virus cases, incomplete contact tracing results threaten to hamper the state's response efforts. The upshot is that scores of people exposed to a sick person aren't advised to stay home from work, stop going to school or otherwise quarantine.

A Health Department spokesman said in a statement that the agency is working internally and with the vendors to "continuously analyze and improve" the contact-tracing process.

"For example, we have increased the number of attempts made to reach a contact, adjusted the time of day when we place calls to improve the chance we will reach a contact, and started implementing a system to text a contact first to let them know a contact tracer will be calling," he wrote.

In an interview, state epidemiologist Dr. Jennifer Dillaha characterized contact tracing as "still an important strategy" in Arkansas, but acknowledged that a "rapid increase" in the number of confirmed and probable cases "has outpaced, on occasion, our ability to do contact tracing."

A public health practice used for decades to combat infectious-disease outbreaks, contact tracing became a household term as health agencies around the world began using it to combat the coronavirus pandemic. Contact tracers seek out patients to learn about their close contacts, then reach out to their contacts to encourage them to isolate and break the "chain of transmission."

When contact tracing isn't working well, "it just starts to build on itself," overwhelming tracing personnel, missing people who may not know they've been exposed and ultimately worsening outbreaks, said Jeremy Youde, a global health expert who is dean of the University of Minnesota Duluth College of Liberal Arts.

"Fewer people with less information is going to allow for that exponential spread," he added.

During the ongoing pandemic, contact-tracing efforts in Arkansas were first handled by the Health Department and several local partner organizations, including the University of Arkansas for Medical Sciences, Central Arkansas Library and Arkansas Foundation for Medical Care.

The foundation and General Dynamics Information Technology won state contracts in July to expand the work. Both staffed up with a few hundred tracers, with General Dynamics paying $12-$14 hourly and the federation paying $17-$18 hourly, officials said this summer.

A review of weekly data that both vendors submit to the Health Department, however, shows that many contacts, as well as known cases, slip out of tracers' reach.

Since beginning work in July, General Dynamics hasn't been able to reach about one in five of known positive cases to learn about that person's contacts, according to the company's reports. For the Arkansas Foundation for Medical Care, it's about one in seven.

Data show some other measures improving. Since July, General Dynamics' contact tracers are quicker to make contact with covid-19 positive individuals they do reach. From August to September, both vendors also improved the percentages of people testing positive that they were able to reach.

Still, at least 1,504 people who received positive covid-19 test results so far in October didn't connect with contact tracers and were marked "unreachable," meaning tracers stopped trying to call them or the phone number did not work.

Data used for the newspaper's report included only the two largest contact-tracing vendors. It doesn't incorporate numbers from UAMS, which is doing a relatively small amount of contact tracing for the state, or any other entity such as a school or business doing its own contact tracing. The newspaper tracked data through public records requests and the Health Department's website.

General Dynamics Information Technology declined to respond on the record to a detailed list of questions for this article. In a July interview, two of its officials said this is the company's first statewide covid-19 contact-tracing contract. They touted experience running call centers and managing complex health data for government clients.

At that time, the company was ramping up operations, and duplicating and refining processes developed by the Arkansas Department of Health, said Nena Sanchez, senior director for state and local government for General Dynamics Information Technology.

A spokeswoman for the Arkansas Foundation for Medical Care said the group is "constantly monitoring" the data, and that people who don't answer the phone get at least two follow-up calls.

Most people are responsive, spokeswoman Michelle Rupp wrote in an email. Officials have planned virtual focus groups this fall with people who tested positive and their contacts to find out what messaging from contact tracers worked well.

Public health experts say problems with contact tracing in Arkansas parallel those seen across the country, where "sociopolitical" factors made people wary of responding and blunt contact tracing's effectiveness.

Officials also point to the school year's beginning in late August, which created an "influx" of lists of probable close contacts.

Since the two contact vendors were hired, the Health Department's weekly case-investigation reports, which are an after-the-fact analysis, show little change to the proportion of covid-19 cases that can't be linked to their probable sources.

Since mid-July, those records show that the fraction of covid-19 cases that aren't connected to a known positive case, an infection cluster or a congregate setting such as a nursing home hovered at around 35%.

As the pandemic has worn on, affiliates of the University of Alabama at Birmingham School of Public Health have heard growing "antagonism" from people who were reached by contact tracers, said Bertha Hidalgo, an epidemiologist and associate professor with the school.

"One thing they noticed was that it had also become increasingly more difficult to reach people, to get them to be cooperative," she said.

Earlier this month, the situation was so dire in North Dakota that state health officials took to social media to urge residents to do their own contact tracing to clear a "backlog" of cases, reports said.

Hidalgo said states and public health departments must improve messaging to stress the importance of public participation in contact tracing and counteract "embarrassment" or perceived stigma. That could help coax responses from, for example, parents reluctant to name participants at a child's birthday party, she said.

The public can help, health department officials say, by providing accurate contact information during testing, and speaking with tracers and investigators when they call.

"The most common 'unreachable issue' is simply that those being called do not answer the phone nor do they return voice mail messages," Arkansas Department of Health spokeswoman Danyelle McNeill wrote in an email.

"Until we have some sort of pharmaceutical cure or a vaccine or something like that, [contact tracing] is a very crucial step in trying to stop the transmission, stop this unchecked community spread," Youde, the University of Minnesota Duluth dean, said.

The process will become "especially" important when the state reaches a point of lower or declining cases, Arkansas' Dillaha said.

"That could very well help us hasten the decline of cases when we get toward the end of the pandemic," she said. "But in order to do a good job then, we have to do our infrastructure now."

Data showing inconsistent contact tracing success in Arkansas comes at a time when state lawmakers from both sides of the aisle asked questions about the practice, with some citing anecdotal reports from constituents who became ill but did not hear from contact tracers promptly.

It also comes as the federal Centers for Disease Control and Prevention promotes new guidelines for what constitutes a contact, warning that even some brief interactions can qualify. (Arkansas' Health Department has said it already uses a similar definition of "close contact" for contact tracing, so new guidelines won't affect its work.)

State Sen. Greg Leding, D-Fayetteville, said in a phone interview that the state's contact-tracing efforts have been challenged throughout the pandemic, and called a summary of the data potentially "alarming." Without contact tracing successfully, "you're just following behind the disease, instead of finding a way to get ahead of it," he said.

"We're spending a lot of money. If you haven't got a hold of [patients or contacts] in a week, it really isn't worth the time or the effort," said state Rep. Robin Lundstrum, R-Elm Springs, at a Sept. 28 Insurance and Commerce Committee discussion of contact tracing.

During that meeting, Dillaha said the Health Department was "constantly" working to improve processes and that the time it takes to perform contact tracing has shortened. "We're doing much better than we have in weeks past," she said.

Legislators also have expressed concerns that contact tracing violates privacy, a notion health officials and experts say they're working to counteract. Health Department records from earlier this year outline strategies to encourage the public to cooperate.

One internal document from April shows a 14-page proposed script for a contact tracer working for the agency. A related document shows a modified script that includes a section on "dealing with objections: 'But I don't feel sick,' 'I'm not comfortable sharing that information,' 'I can't quarantine because I have to ....'

"I understand that you have obligations to your job and loved ones. However, if you are contagious, your coworkers and loved ones could get the virus from you," a scripted reply reads.

"If that happens, they could get very sick." 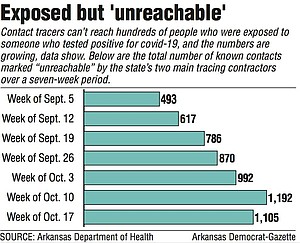