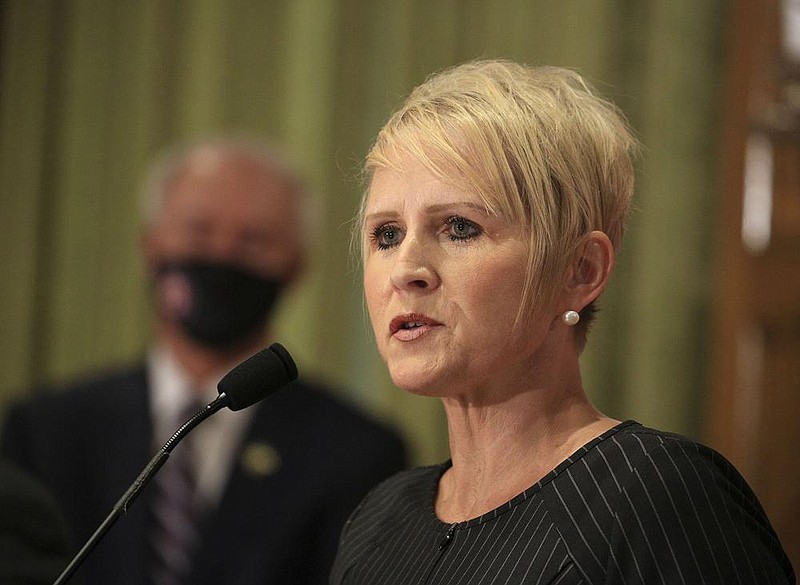 The covid-19 pandemic has turned the job of finding substitute teachers into a quest.

"Our teacher absences haven't increased, but we just don't have the subs to fill the spots," said Karen Allen, assistant superintendent of the Van Buren School District.

The district put out a call for substitute teachers on its Facebook page last month, posting a graphic that stated, "Substitutes Wanted!", along with a link to a job application.

Allen attributes the substitute shortage directly to the pandemic.

The district is in its third year of outsourcing hiring, training and scheduling of substitute teachers to Kelly Educational Staffing, and filled nearly 100% of teacher absences in the first two years, Allen said.

She didn't know what this year's rate has been, but it's lower, she said.

The district has been flexible and creative in filling the gaps. Sometimes classrooms are combined, or support staff members might have to step in, Allen said.

Schools in the Pulaski County Special School District pull teachers from their preparation periods to cover other classes when there aren't enough substitutes, said Shawn Burgess, the district's assistant superintendent for human resources.

Occasionally employees from the district's central office or support staff members who typically work fewer than 40 hours a week will fill in, Burgess said.

Tally Thornton, a science teacher at Conway's Courtway Middle School, said she has covered another teacher's class about once a week this school year, something she rarely had to do before.

"We all do extra duty right now. We're all going above and beyond," Thornton said.

The nation has faced a shortage of substitute teachers for years, and the pandemic has exacerbated that situation, said Amanda von Moos, co-founder of Substantial, a national nonprofit organization focused on improving substitute teaching.

A substitute usually is called into a classroom because the regular teacher is sick. It's no wonder then that during a pandemic, those who have worked as substitutes in the past are thinking twice about doing so now, von Moos said.

The one-on-one or small-group interactions they have with students inspires many substitute teachers to keep coming back, she said. Substitutes feel like they made a difference in a student's life. Everyone wearing a mask and social distancing hampers those interactions, von Moos said.

The state does not have a role in finding substitute teachers for the school districts, said Deputy Education Commissioner Ivy Pfeffer. School districts must either do it themselves or contract with a staffing firm for that service.

"We know sometimes when districts have had to pivot to remote learning or virtual learning, that's been because they could not get subs to always cover in the classrooms," Pfeffer said.

The Rogers School District has been running in the low 80% range in terms of filling teacher absences this school year; last year, that rate was somewhere around 95%, according to Roger Hill, assistant superintendent for human resources. Teachers were absent many times last year for professional development, he said.

"This year, we're trying not to pull teachers out of their class unless absolutely necessary," he said.

The district is short 10-12 substitutes most days so far this year, Hill said. He came up 22 substitutes short on a recent Friday, he said.

Hill sent an email last month to those who have substitute taught for the district in the past, explaining the safety precautions the schools have put in place.

That email produced a bump in the number of people substituting in Rogers, but the district needs another bump, Hill said.

Pay rates for substitutes vary from district to district. Rogers pays substitutes who are fully certified teachers $92 a day; those who are not certified but have college degrees get $86; and those with just high school diplomas make $80.

The topic came up at a Rogers School Board meeting Thursday. Board members discussed ways the district could entice more people to serve as substitutes, including some kind of bonus payment for working a certain number of days in a semester.

The Pulaski County district works with Professional Contract Management, another company that provides districts with substitute teachers. Burgess said its rate of filling teacher absences this year has been between 80-90% each day, compared with 95% or above in past years.

The company is preparing to roll out a financial incentive for those who make referrals to someone who then goes to work as a substitute, Burgess said.

• 44% of substitutes receive no training