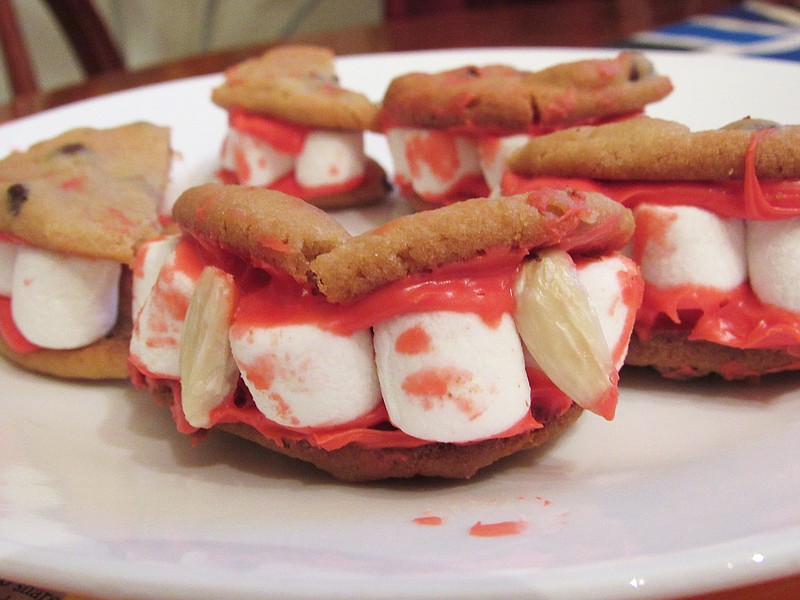 Dracula Dentures are chocolate chip cookies cut in half, smeared with red icing, studded with a row of miniature marshmallows and rejoined. (Special to the Democrat-Gazette/Kimberly Dishongh)

Trick-or-treating is a scary idea for some this Halloween, with a global pandemic underway and all, but have no fear — there are ways to have fun without the risk of picking up (or dropping off) covid-19.

Some families have come up with covid-appropriate ways to adapt their trick-or-treating tradition, including leaving treats on the front porch for trick-or-treaters to pick up rather than handing them out at the door, reversing the trend by making snack sacks to drop off for friends, and trick-or-treating among friends they trust to have the same covid-safe practices that they do.

Others are inviting friends to drive by and wave to their costumed children on front lawns, tossing candy if they choose, or challenging them to an Instagram costume contest, where they post hashtagged costume pics and invite followers to vote for their faves.

Plans for a "candy slide" that can be used to keep 6 feet of space between trick-or-treaters and trick-or-treatees are easy to find online, as well. These slides use a PVC pipe to shoot candy from a front porch.

Michigan carpenter Matt Thompson also came up with a frightfully fun Halloween ghost zipline system for flying Halloween candy out to kids. He shared his how-to with the rest of us via YouTube.

At our house, we started off the season with some good old mummy races, which was a tad scary because the competition around here is fierce.

Mummy racers have their legs (or if they feel especially spirited, their entire bodies) wrapped so they are forced to hop to the finish line.

We tried toilet paper as a stand-in for white bandages, but our brand is apparently not known for its strength and couldn't even withstand the wrapping process. We switched to crepe paper streamers and marked our finish line with the pumpkins we would carve later in the day.

We also played a spirit-lifting game of shadow charades.

We used a curtain rod to hang a sheet in a doorway and put a battery-powered LED lantern on a shelf next to the person acting out the clues. That was fun, and it devolved into much-needed fits of laughter and feats of imagination as each kid took a turn shaping hand shadows into spiders, bats, birds and video game characters.

Playing games worked up some appetites, so we noshed on eerie eats that were as fun to make as they were to devour.

Cut slits into the sides of a hot dog, about one-third of the way from the end to make fold-out arms, and create two legs by slicing from the midpoint to the end opposite your arm slices.

Roll refrigerated crescent roll dough out into rectangles and cut it into strips. Roll those strips around each hot dog's arms and legs, torso and head. Bake.

Top English muffins with pizza sauce. Shape mozzarella slices into ghosts and use chopped olives to make ghost eyes and a round mouth. Bake until the cheese is melted and the muffins are lightly ghosted ... er, toasted.

For dessert, there were Dracula Dentures — chocolate chip cookies cut in half and smeared with red icing (vanilla with red food coloring). Sandwich the halves, round edges together, and stuff in a row of miniature marshmallows that look amazingly like puffy teeth.

Twist apart an Oreo and break each half in half. Put a dab of peanut butter on a Reese's Mini Peanut Butter Cup and attach broken Oreo halves on the cup to make wings, with the round side on top and the corners almost touching. Use more dabs of peanut butter to glue on candy eyes.

Shape shortbread dough into knobby fingers and etch in some wrinkles to create knuckles. Give the witch's fingers yellowed fingernails (blanched almonds) and bake. After removing the fingers from the oven, slide off the fingernail and drip some red icing into the nailbed and replace the nail.

With our bellies full of snacks and no longer making those creepy growling noises, we moved on to some creepy crafts.

The first thing we made was undoubtedly the simplest. Just snip orange cardstock into strips -- any size should work, but make sure they are all the same length. Punch holes in both ends of the strips and connect them at both ends with metal brads. Once they are secure, fan the strips out into spheres to make the cutest little pumpkins. We considered making green leaves out of construction paper for ours but ultimately decided to twist green pipe cleaners around the brad at one end of our pumpkins to create stems.

LIGHTING THE WAY TO HALLOWEEN

Empty almond milk cartons and some empty plastic tubs can be converted into some cool lanterns with a little inspiration from Crayola.com. Cut rectangular holes in the sides of the boxes and paint the boxes black. Shape some sponges into pumpkins or ghosts or any other stamp-worthy outline you can imagine, dip your stamps into paint and make prints on tissue paper. Glue or tape the tissue paper inside the box, covering the rectangular holes.

Pop in some LED tea lights and use these lanterns to scare away any monsters that might show up at bedtime.

Sharpen and shave some crayons, sprinkle the shavings between two pieces of wax paper and warm with a hairdryer to melt the bits into a swirly design.

Cut a witch's cauldron out of construction paper, minus a hole in the middle. Trim the wax paper design to slightly larger than the hole and tape it to the back of the cauldron.

Give the cauldrons fun labels like Frog Eye Soup and Polka Dot Spell, and tape them to the window, where the sun can shine through to make pretty kaleidoscope designs.

ROCK-IT WITH SOME GHOSTS

We needed film canisters to do some ghost rockets, but who has those anymore? I asked my kids to help me think of a suitable substitution for film canisters for this scary STEM project, and they just gave me zombie stares, finally admitting they had no idea what a film canister looked like.

We settled on empty Nuun sports-electrolyte tablet canisters, which are unfortunately too heavy for this project as they are. However, if you saw them in half, they are a pretty reasonable alternative, and the lid still fits.

We experimented with using baking soda in place of cornstarch and pouring in vinegar instead of water, and after watching patiently for a few extra seconds, witnessed our ghost having even more liftoff.

There's something about kids and fizz — my kids, even my older kids, had fun experimenting, varying the amounts of each chemical to see what resulted in the fizziest reaction.

Adding food coloring to this one makes it even more fun. (Warning: This won't create an earth-shattering explosion, but it will create a ghoulish mess. Do this one outside.)

We carved pumpkins at our house again this year and had a little more time than usual because our activities have been curtailed by covid.

Julianna, 11, gave hers a silly emoji face. Bennett, 15, stacked two pumpkins to make a scary skeleton. The torso has a separate design on the back — a housefront with a pie pumpkin on the inside peering out the windows. Charlie, 8, went with his latest obsession, a video game motif.

With trick-or-treating and carnivals off the table for us this year, we're coming up with some other substitutions for the big night. Julianna plans a spooky scavenger hunt. Since we'll miss the usual carnival cakewalks, the prize will be a chocolate fudge cake or some chocolate chip cookies.

The Dishongh kids are tasked with decorating one room of the house apiece, and each will choose a couple of kinds of candy to hand out at their assigned doors. They have refused to unveil their masterpieces before the big night, but they have begun leaving bloody handprints (dried glue and red paint) on mirrors and creepy one-armed baby dolls on the stairs.

They also had to put a frightful spin on some Christmas carol lyrics. Here's a sampling: