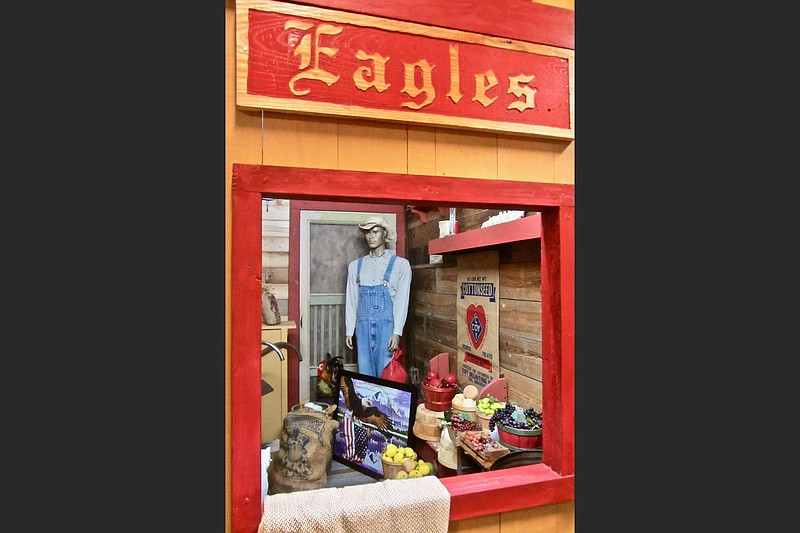 Overalls are among the potpourri of merchandise at a museum store. (Special to the Democrat-Gazette/Marcia Schnedler)

LONOKE — Actual time travel remains a science-fiction fantasy — and will most likely stay that way. But a journey to the past is only a day trip away at some of Arkansas' several dozen county museums.

One of the closest to Little Rock also does one of the best jobs of evoking the so-called Good Old Days of a century or so ago — however good (or bad) they actually may have been. It's Lonoke County Museum, located along U.S. 70 in Lonoke, occupying a structure built in 1877 as the town's first brick house.

A highlight of the nonprofit attraction, operated by volunteers as are many local attractions, is a walk-through Old Town. The mock-up simulates Lonoke's business district at the dawn of the Automobile Age when passenger trains crisscrossed the state and silent movies were the latest diversion.

Lonoke's population at the start of the 20th century was barely 1,000. But commerce and social life evidently prospered in what was then a shopping hub for farmers from the surrounding county.

Visitors can look through the replica fronts of buildings. They include a bank, a county jail, a church, a grade school, a barbershop, one of the era's three hotels, a cafe, a saloon, a railroad freight depot, a woman's hat shop, a doctor's office, a bakery, a general store, a land office and a blacksmith's shop.

Elsewhere, a large gallery is stocked with a panoply of mammals, birds and reptiles native to Arkansas. The taxidermy includes the head of a bison, a Plains species not normally linked with the Natural State. A sign notes that "the last herd of buffalo in Arkansas was slaughtered in the Saline River bottoms in 1808. They were extinct here by 1820."

Museum artifacts go as far back as prehistory, including a replica of an American Indian dwelling plus hundreds of arrowheads. In a room focused on the Civil War, a mannequin dressed in a flowing outfit with a vivid red skirt resembles a belle of the ball from the antebellum South.

In fact, attire like that gown was donned as a disguise by a Confederate guerrilla. The original is said to have been worn by the slightly built Howell A. "Doc" Rayburn to infiltrate a dance hosted by Union officers.

As captain of a renegade Rebel troop, he devised the deception, entering in the dress the "with a group of girls. He was able to learn valuable information from the Union soldiers." Leaving, "he took Limber Jim, a beautiful black horse that belonged to a Union officer."

A brochure available at the museum maps a walking tour of 24 sites built between 1877 and 1928. Eight are listed on the National Register of Historic Places, while five were designed by the noted architect Charles L. Thompson.

Now it's time for a trivia question: What is Arkansas' only county seat with the same name as its county?

You guessed it: Lonoke.