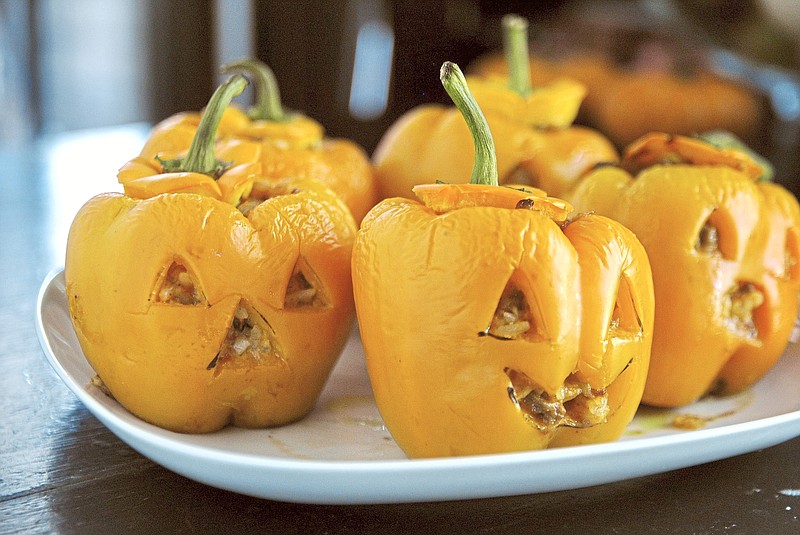 It wouldn't be Halloween without a jack-o'-lantern in front of the house. This year, instead of filling up on candy, why not also make a miniature version of the candle-lit pumpkin for dinner?

All you need are some fat orange or yellow bell peppers, a small carving knife and a hand steady enough to carve a face into the side of each pepper. Then, stuff the mini pepper-o'-lanterns with a savory mix of beef, tomatoes, cream, rice and cheese and bake. They're easy to prepare and lots of fun to eat.

For a vegetarian version, substitute a can of black beans or lentils for the beef. For more spice, add chopped chipotle pepper in adobo sauce.

Heat oil over medium heat in large cast-iron pan. Add onion and cook until translucent, 5-8 minutes. Add garlic and cook for 1-2 more minutes, until fragrant. Add ground beef and cook until starting to brown, 3-5 minutes. Drain fat, then add tomatoes and cook for another 2-3 minutes.

Add cream and cook until the mixture is reduced, about 10 minutes. Turn off heat and stir in shredded cheese and cooked rice, tossing until well incorporated. Season to taste with salt and pepper.

Cut each pepper around the stem using a paring knife or other small utility knife, and remove to create a lid. Remove seeds (you may have to cut away some flesh). If the peppers do not sit flat, trim the bottoms slightly. Try not to cut a hole in the bottom, but if you do, don't panic. Unless it's a big hole, the stuffing won't fall through.

Cut a face like a jack-o'-lantern into the side of each pepper using the tip of a small knife. (I used a dry-erase marker to guide me.)

Fill peppers with beef mixture and put on baking sheet with the lids on the side. Bake until peppers are fork-tender, about 30 minutes.

[RELATED: Scary snacks — Spooky foods that could put you in the Halloween spirit]