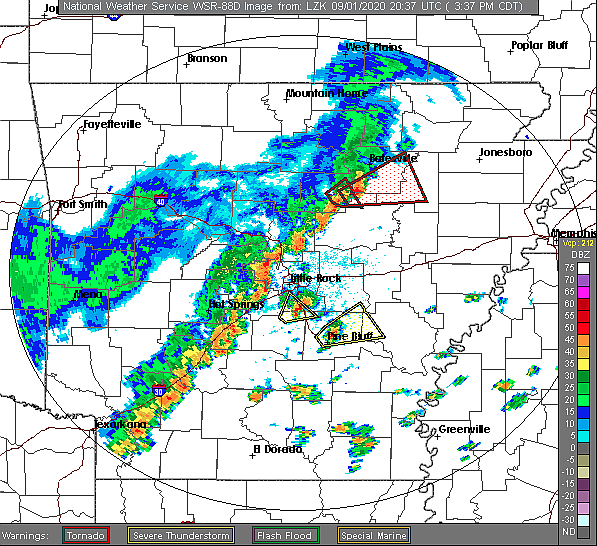 This still taken from the National Weather Service in North Little Rock website on Tuesday shows a portion of Central Arkansas under a tornado warning until 3 p.m.

The weather service issued tornado warnings for various portions of the state Tuesday afternoon as a severe storm made its way across Arkansas, leaving behind power outages and reports of downed trees.

Brian Smith, a senior forecaster for the weather service, said there appears to have been some possible tornadoes in the Central Arkansas area, but the agency won't be sure about the number or the path until a survey is completed.

"The areas we think most likely something happened are in Conway County, Faulkner County and Cleburne County," he said.

Jimmy Wiedower, a deputy for the Office of Emergency Management in Faulkner County, said he wasn't ready to say if a tornado came through the county, but mentioned some high winds did knock down several trees and power lines. He said damage could be seen in the Wooster area, some parts north of Greenbrier and into Guy.

"We had some minor damages to homes in the Wooster area and tin was blown off some of the barns in the Guy area," Wiedower said. "We had no injuries from what we have heard. I don't want to call it a tornado because we haven't had any verification of it yet."

The National Weather Service has issued a tornado warning until 4:15 p.m. for a portion of Independence, Cleburne, White and Jackson counties. 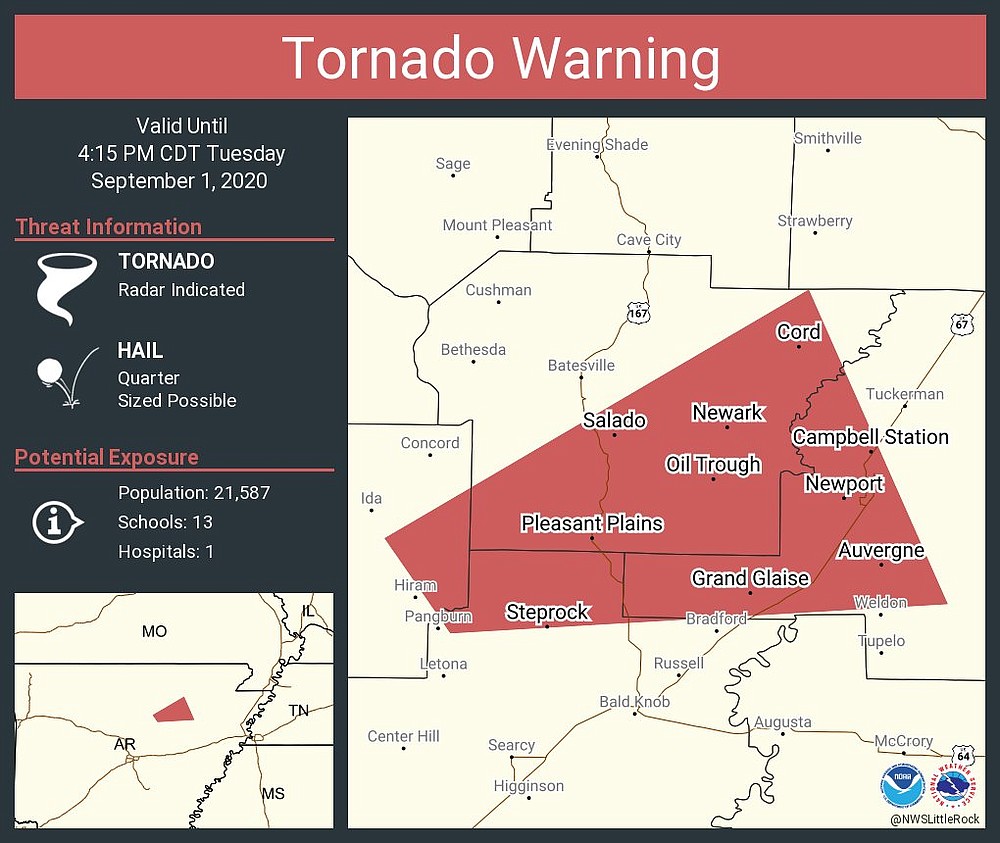 2:42 p.m.: Tornado warning in effect for portions of Central Arkansas

A portion of Central Arkansas including parts of Faulkner, Cleburne, White and Van Buren counties are under a tornado warning until 3 p.m., according to the National Weather Service. 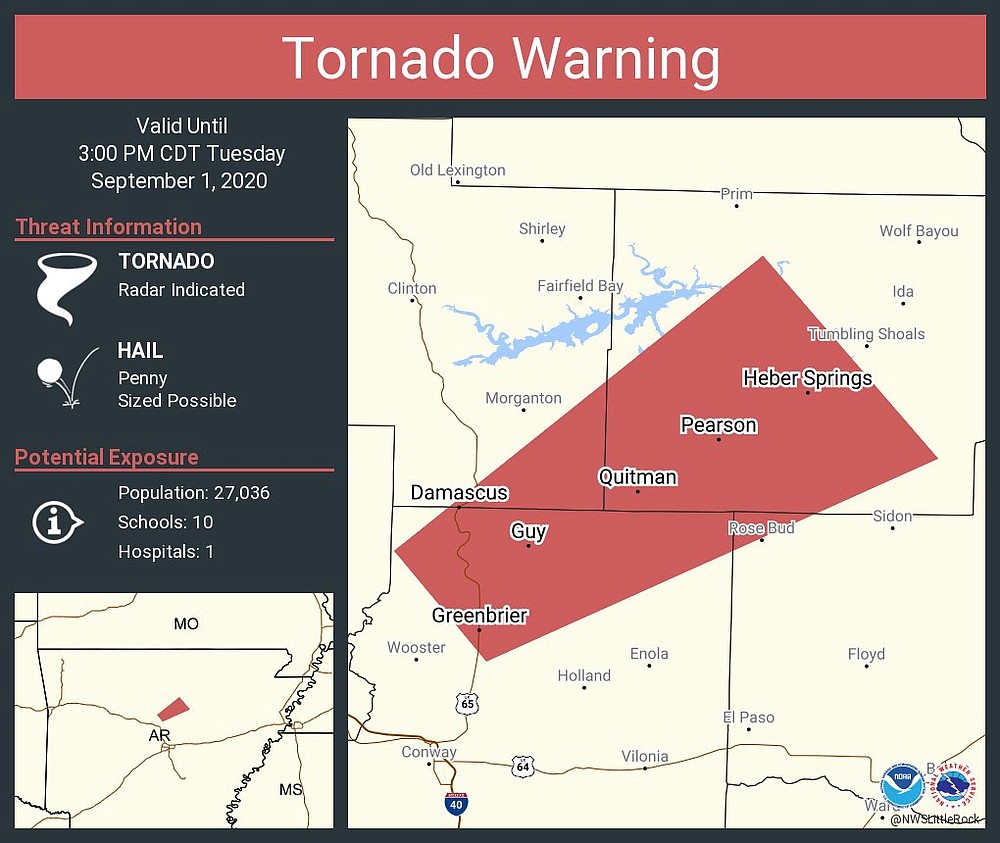 2:10 p.m.: Tornado warning in effect for portions of Central Arkansas

A portion of Arkansas including parts of Faulkner, Conway and Perry counties are under a tornado warning until 2:30 p.m., according to the National Weather Service. 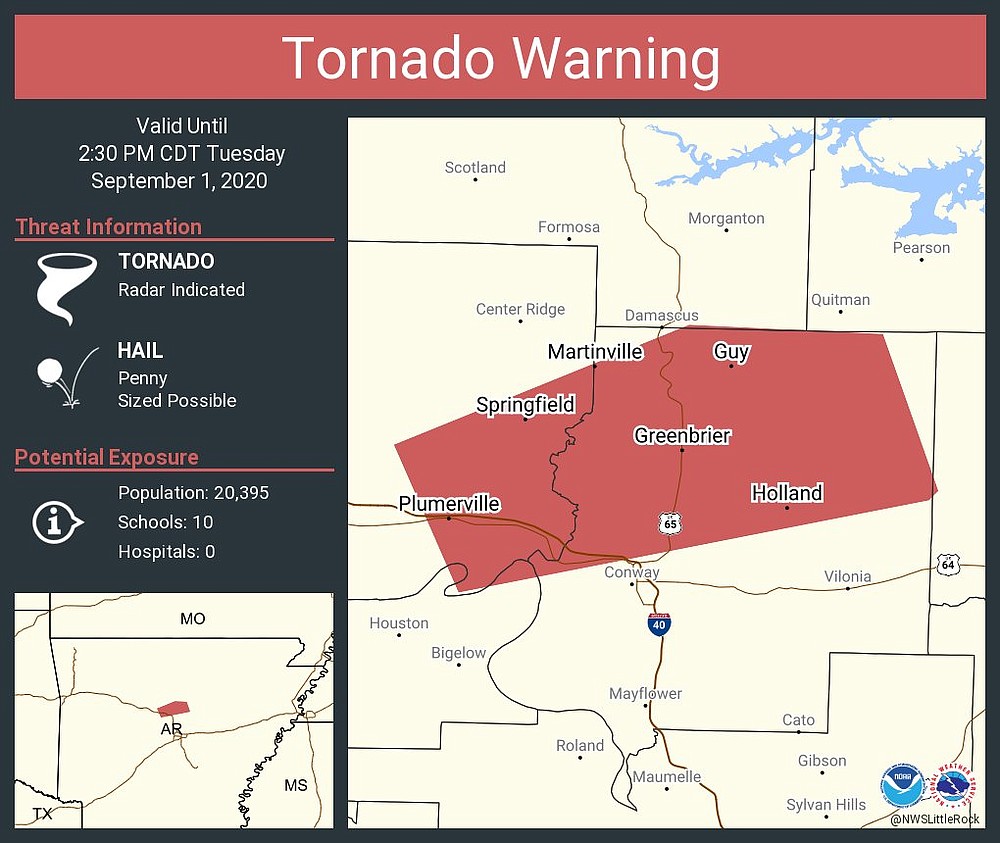 Forecasters warned of flash flooding Tuesday morning across much of northern and western Arkansas as rain is predicted to continue falling throughout large portions of the state through at least Thursday.

The weather service also says there is a marginal risk of severe weather for central and eastern Arkansas through tonight. Areas of showers and thundershowers will continue, and isolated thunderstorms could become severe. The principal threat is strong to damaging winds and hail, as well as heavy rain that could lead to flash flooding.

Flash flooding has been widespread in portions of Scott, Yell, Polk, and Montgomery counties, with water over many roads and highways. Heavy August rains in western and southwestern Arkansas — in some cases record rainfall — have saturated the ground.

Meteorologist Tabitha Clark said heavy rains over northeastern Arkansas played a role in extending the watch, which included the western half of Pulaski County and the city of Little Rock on Tuesday morning.

Rain and thunderstorms are expected to continue throughout the morning as the pattern moves from northern Arkansas into western and central sections of the state.

The weather service predicts a possible additional 2-4 inches of rainfall over the area through Thursday. Forecasters expect the pattern will remain unsettled through at least that time.

The weather service reports that all of west central and southwest Arkansas received at least 10 inches of rain in August, and some areas received more than 20 inches. It was the wettest August on record at Ashdown, De Queen, Dierks, Mena, Nashville, Pine Ridge, Texarkana and Waldron, the agency says.

"This is a little bit of an unusual pattern that you normally wouldn't see at the end of August and the beginning of September," said Thomas Jones, a meteorologist at the agency.

The weather service predicts precipitation will build to the south on Thursday and will not be as widespread and heavy; drier air is expected to arrive from the north on Friday.

This story was originally published at 10:28 a.m.