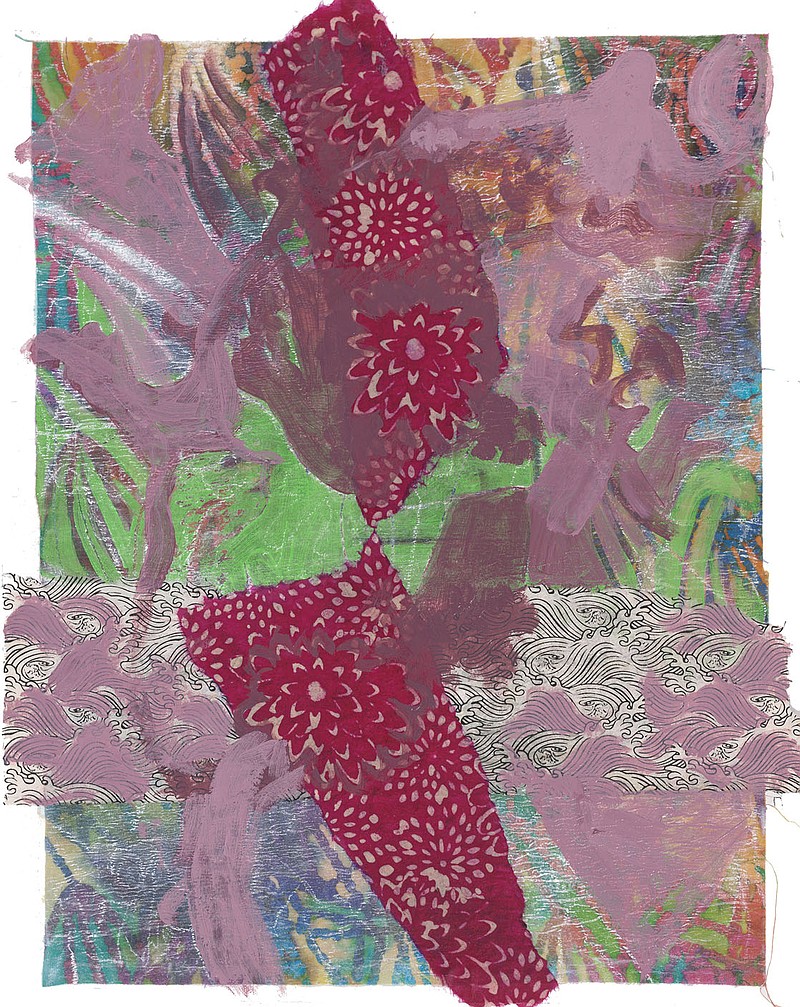 Northwest Arkansas is a hotbed of artistic talent. In our August Makers' Round-Up, we shine a spotlight on more of the folks who make up the creative, diverse heart of the region's art scene.

Please tell us a little bit about your work. What do you create?

When did you first start thinking of yourself as an artist/creator/maker? What were some of the first things you remember creating?

In 1984, at the age of 14, I began to play guitar. It all started from that first chord. I was in a few bands and did a few tours; although I loved it, my mind started to wander as to what else could happen. 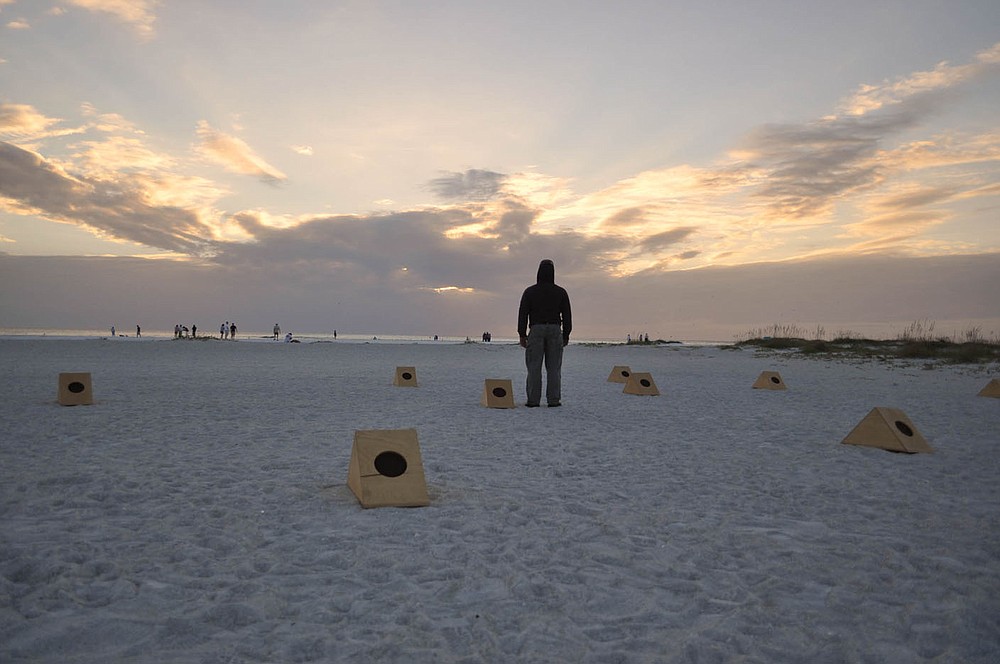 Where can we see/purchase your work? 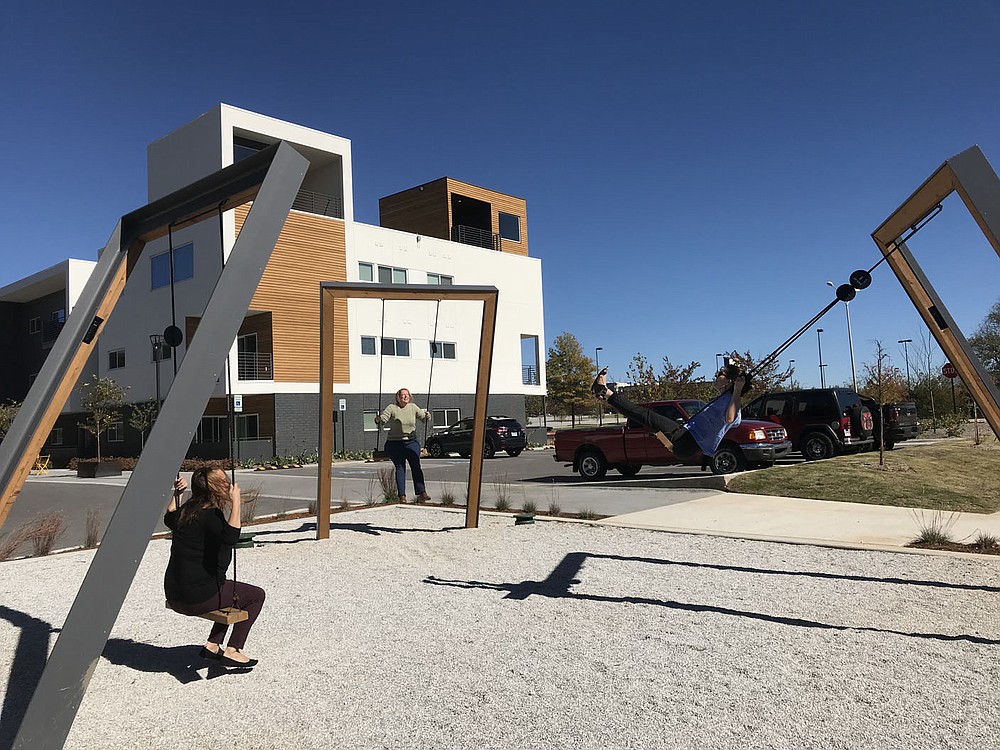 What's your favorite part of the creative process?

Brainstorming a project is great. The possibilities seem endless. But I do love when a project is finished and standing before it. To use the piece and share it with my wife and daughter is incredible. Probably the goal of any of my ideas.

Have there been any responses to your art that you found particularly moving or memorable?

Making things that people can use feels good. But it's amazing when people tell me how these pieces are part of their lives. Life is just a collection of moments; I like being a moment here and there. 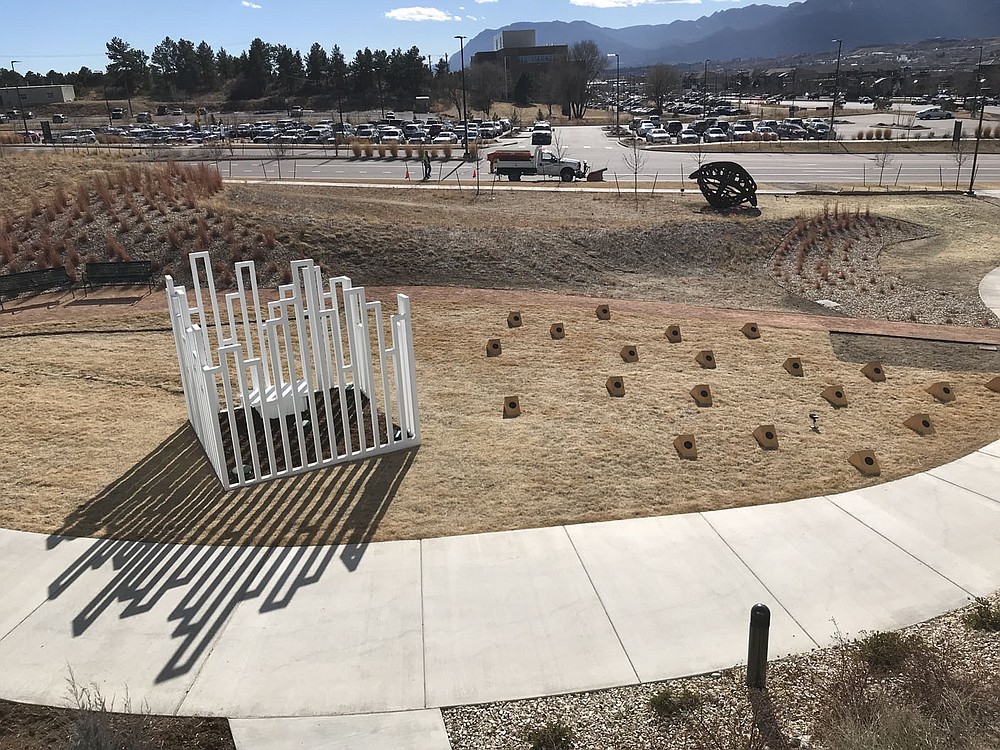 How has your work changed or evolved over time?

Over the years, my pieces have become more engulfing but more simple.

If you could change one aspect of society through your work, what would it be?

There are too many lines drawn in the sand. When I was in college a million years ago the one thing I remember is a professor saying, "Be open. Let your opinions evolve. Let your brain work." I think about this especially now. I meet a lot of people that don't seem open. They pick a side and run on autopilot. The world would be better if people would be more open to ideas and each other. 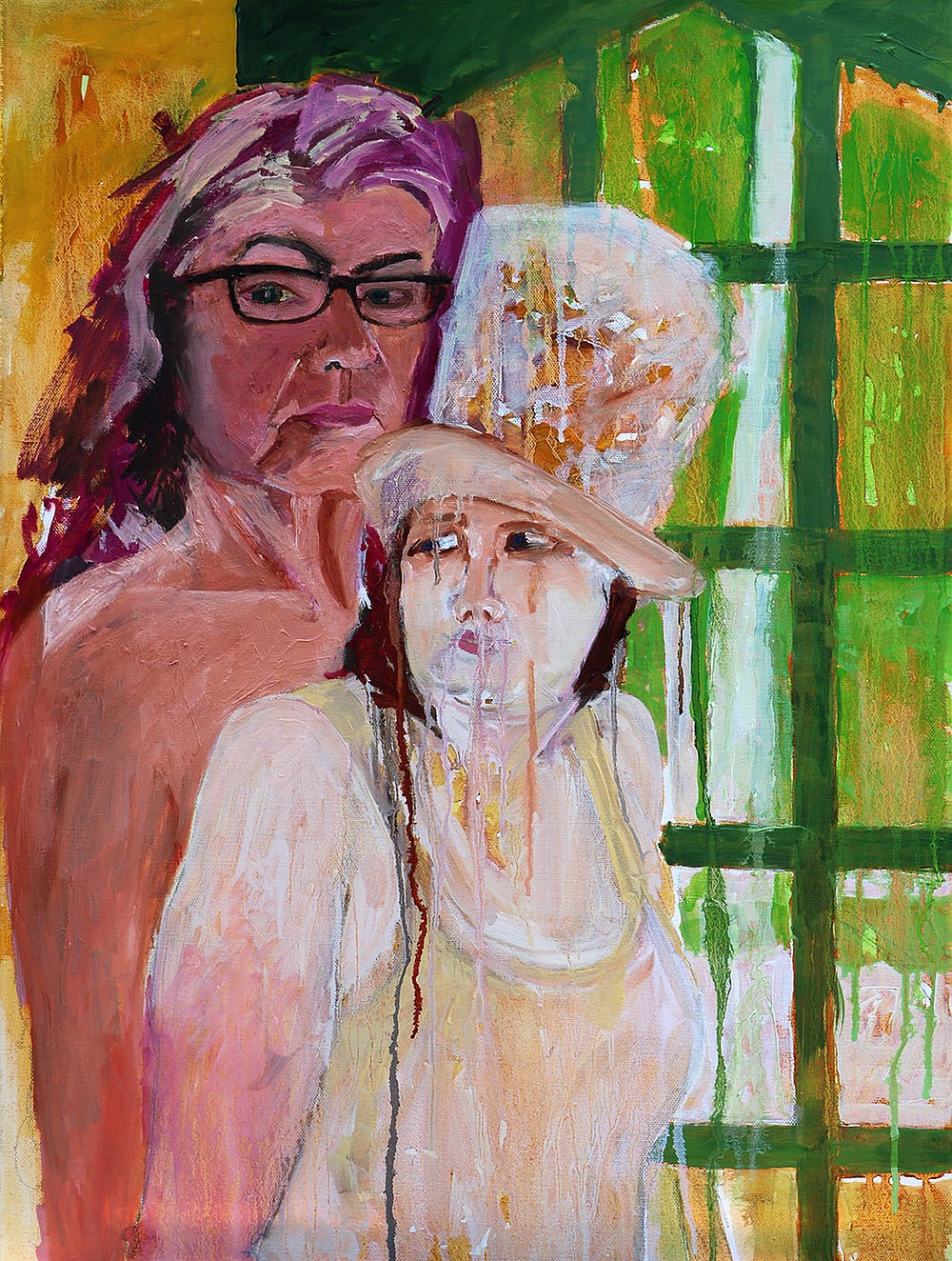 Margaret Correll is a retired drawing instructor from Northwest Arkansas Community College and a member of the Fenix Fayetteville art collective.

Please tell us a little bit about your work. What do you create?

Mixed media (painting, drawing, collage) is my favorite creative mode at this time. I use painting, drawing, collage all in one artwork. Working in series is how I create. Most recently, I have been using 16-by-20-inch sheets of canvas and gluing fabric or decorative rice papers to the surface. From that beginning, I work with mixed media. Using mixed media, I will draw or paint imagery or apply photocopied imagery. In the past, especially while teaching, I have worked with sculpture, clay, printmaking and watercolor.

When did you first start thinking of yourself as an artist/creator/maker? What were some of the first things you remember creating?

When I was in kindergarten in Schenectady, N.Y., in the 1950s, my teacher wrote my parents a progress letter stating that "Marty (family nickname) still likes to escape into her painting..." I still have the letter. What a prescient observation by my kindergarten teacher. My family lived in Boston in the 1960s. Recognizing my predilection for art at an early age, my mother took me to Saturday art classes for years. I am very grateful to her for doing that. At about age 11 or 12, I recall painting on cardboard a picture of a hot dog, bun and milkshake. While living in Boston and later Minneapolis, my mother would take me to art museums.

Where can we see/purchase your work?

My work can be viewed on my website, margaretcorrell.com.

What's your favorite part of the creative process?

I look forward to approaching two parts to my creative process: (1) When beginning a work, I have a general idea or theme I want to pursue. I enjoy the process of taking the piece through several incarnations. I move imagery around, change colors, draw or paint over parts of the piece. In order to make many changes as I work, I often deal with fear. Examples of my fears are too profuse to list, but some are fear that whatever little or big part I want to change won't work out or it won't be acceptable to the viewer. That last fear I have to practice deleting from my mind frequently. I'm making progress on eradicating some fear and being braver in my work. (2) The wonderful part of creativity for me is when my mind relaxes or disappears. I call it going into an "alpha state." Often, that "alpha state" will stay with me throughout the day after I'm done working. 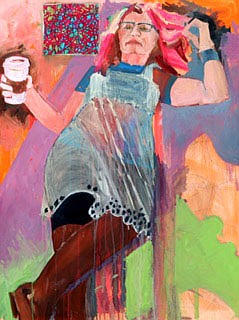 How has your work changed or evolved over time?

In the early 1970s, I attended the Minneapolis College of Art and Design, where I received my BFA in painting and drawing. It was my experience at MCAD that led me to work from my fantasy life and imagination. To date, I have done many self-portraits and included self-portraits in my artwork. Because of the positive and negative influence of an MCAD professor, I started constructing architectural sculpture. As many students did, I revered this professor. Because he came from a philosophy background and because of the period of art history we were in at that time, I was introduced to conceptual art, which fascinated me and influenced my approach to art to this day. By that I mean, I was taught that the idea was the place to start.

Moving to Los Angeles in 1974 to attend graduate school at Otis Art Institute, I received my MFA in sculpture and design. While at Otis, I applied for and was awarded a studio art internship with the Whitney Museum. It was an awesome experience. Studio spaces were provided in the basement of this old bank. I lived in Soho back when it was all artists living there, carving out huge studio spaces. In the building I lived in, there was a stogie cigar factory with these older ladies rolling "old stogie" cigars. Part of this exciting opportunity to spend a semester in New York City was to have leisurely and constant access to the many art museums.

I returned to my hometown of Minneapolis in 1976 and worked at MCAD as the part-time gallery director. That position allowed me to schedule exhibitions and especially installations by many artists. In 1979 or '80, I made a major detour from my career as an artist. I attended law school in St. Paul. What a blunder! Don't ask me why I did it. I never practiced law but worked in a few law firms doing research. I got married to my husband Bill in 1983 and we had our son, David, in 1988. In 1994, I decided I wanted to return to art making. I set up a studio in a bedroom in our home and started creating mixed media pieces, with collages being their primary component.

In 1996 we moved to Bella Vista. I got involved with a painting group in Bentonville taught by Melissa Garrett. Participants worked in whatever two-dimensional media they wanted to, and Melissa provided feedback if desired. I taught K-8 for a couple years at Benton County School of the Arts and was an adjunct instructor part time instructor at NWACC for nine years.

I became intrigued with the curves and convolutions of trees and roots, which I drew and painted in an abstract manner. In 2005, I exhibited my tree work at the Arts Center of the Ozarks in Springdale. After I retired in 2014 from NWACC, I have become a part of a studio workshop that meets once per week and have accomplished much art there. I hired an artist's model whom I drew and painted for a couple years. Those artworks are the "Brittany" paintings and drawings.

At age 65 I asked my husband to take nude photos of me while he stood on a ladder directly above me. My arms were extended upward. From these photos, I drew myself in pencil and ink. I wanted to draw my 65-year-old body from an obtuse angle. Other nude self-portraits include a series of drawings and paintings from photos taken by a professional photographer. Victor Chalfant, the photographer, was working on a project involving photographing nude women of all ages, sizes, ethnicities, gender ID, etc. I wanted to be photographed wearing this quirky top hat made of straw with silk leaves and flowers on it. I drew various poses with the hat on with Prisma colored pencils and oil paintings. Incidentally, in both sets of photos, the ones Bill took and the photos Victor shot, my body was partially covered. Regarding the hat, I have photographed and painted several people wearing the hat. One painting, "The Haint," shows a self-portrait and a friend wearing the hat. In Southern lore, a haint is a ghost. I painted Jennifer with a ghostlike appearance and glancing backwards with tears streaming down. I can't concretely explain the symbolism of this painting except it relates to the death of our son in 2008 at age 20. After he died, I became a ghost.

In 2016 I began using fabric and decorative paper with the constellations printed on it. The constellation theme was influenced by a couple visits we made to the Mount Lemmon Observatory in Tucson. One series of collages tells the story of Melikki, the ancient Finnish goddess of hunters, the forest and motherhood. I was intrigued with Melikki's story because I'm part Finnish. The legend goes that Melikki pulled the bear constellation (Ursa Major) down from the sky for the hunters. She became the goddess of the hunters.

I am inspired by artwork I see in museums. I learned about Melikki at the Swedish Art Institute in Minneapolis. On a trip to Venice, I found a female figure in a painting that I used as the model for the Melikki series. Also in Venice, I was captivated by a painting of Judith, who has been painted many times by Renaissance and Baroque painters. Judith is the heroine of the story of her murder of the evil Holofernes. I photographed this painting and used reproductions in several collages.

What are some other artists/creators that inspire you?

Do you have any advice for a creative just starting out?

To thine own self be true. 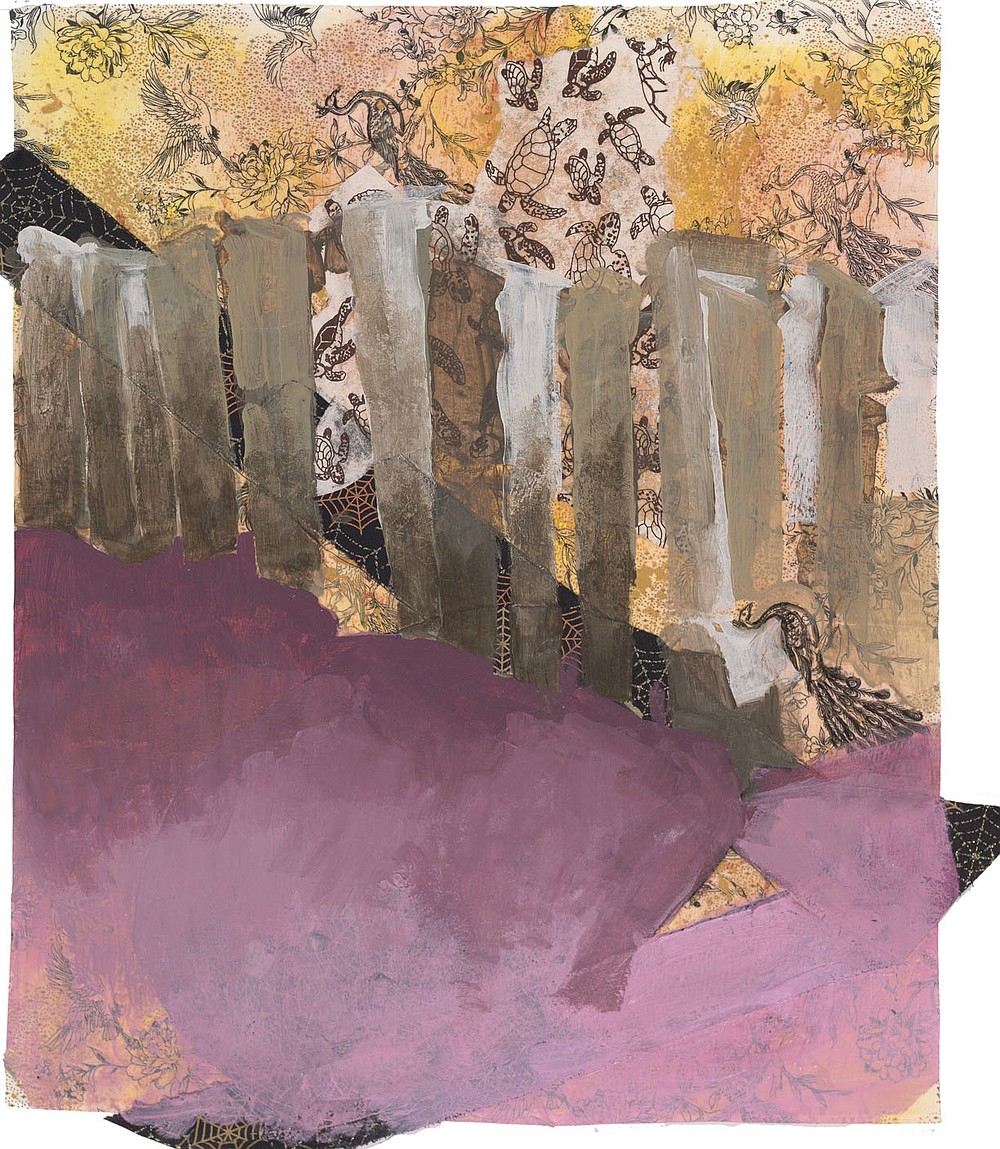