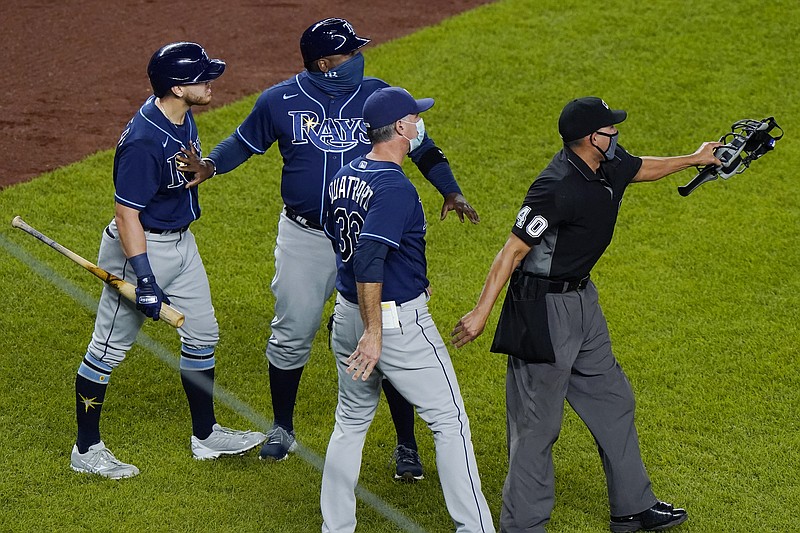 Tampa Bay Rays pinch-hitter Michael Brosseau, left, is restrained by a coach as second base umpire Chad Fairchild (4) warns New York Yankees relief pitcher Aroldis Chapman to stay away from Brosseau as the two players exchanged words following the Rays' 5-3 loss to the Yankees in a baseball game, Tuesday, Sept. 1, 2020, at Yankee Stadium in New York. The altercation started after Chapman threw a high pitch at Brosseau. (AP Photo/Kathy Willens)

Yankees closer Aroldis Chapman was suspended for three games Wednesday, a day after he threw a fastball near the head of pinch-hitter Michael Brosseau while closing out his first save of the season in a 5-3 victory over the Tampa Bay Rays. Chapman said the pitch was not intentional and he is appealing the suspension. "I think it was a little harsh," Chapman said through a translator. Chapman, who previously was disciplined in his career for intentionally throwing at the head area, also was fined by Major League Baseball. Yankees Manager Aaron Boone received a one-game suspension and was also fined an undisclosed amount after the events during Tuesday night's game. Rays Manager Kevin Cash received a one-game suspension and was fined an undisclosed amount after being ejected during the game and for his comments afterward. Umpires convened before issuing warnings to both benches, and Cash was ejected after coming onto the field to argue.

Julian Alaphilippe's ride in the yellow jersey is over, and his rivals had nothing to do with it. The Tour de France leader was stripped of the coveted shirt Wednesday after being handed a time penalty for illegally receiving provisions near the end of Stage 5, which had been largely uneventful until then. British rider Adam Yates was moved up to first place in the revised general standings after Alaphilippe was docked 20 seconds. "I don't think any rider would want to take the jersey like this," Yates said. Only minutes after versatile Belgian rider Wout van Aert won the stage in a sprint finish, TV footage showed Alaphilippe grabbing a bottle from a staff member of his Deceuninck-Quick Step squad about 11 miles from the finish. Under racing rules, riders are not allowed to receive provisions -- either drinks or food -- during the final 12.5 miles of a stage. Deceuninck-Quick Step did not immediately explain why the staff member was posted inside that zone and why he handed out the bottle to the French rider.

Running back Joe Mixon signed a four-year, $48 million contract extension through the 2024 season on Wednesday, keeping him with a Cincinnati Bengals team that took a chance on him. The Bengals drafted Mixon in the second round in 2017 out of Oklahoma, where he was suspended for punching a woman in the face. The Bengals drew backlash with the choice, prompting owner Mike Brown to acknowledge they were "taking a risk" on Mixon because he's so talented. Mixon has avoided trouble and emerged as one of the NFL's top running backs. Mixon has run for more than 1,000 yards in each of the past two seasons in spite of an offensive line that struggled to open holes.

Haskins to start for Washington

Coach Ron Rivera on Wednesday announced Dwayne Haskins will be Washington's starting quarterback for Week 1 against the Philadelphia Eagles. It's not a surprising development but a confirmation that the 2019 first-round pick did enough to earn the job under Rivera's new regime. Haskins got the nod over Kyle Allen, whom Rivera knew well from his time with Carolina, and veteran Alex Smith, who's less than two years removed from suffering a broken right leg.

Chargers safety out for year

Los Angeles Chargers Coach Anthony Lynn knew he would need plenty of contingency plans this season due to the coronavirus pandemic and no preseason games. Now he must go to one contingency he was hoping to avoid -- replacing one of his top defensive players. Safety Derwin James will miss the season after having surgery to repair a meniscus tear in his right knee, the team announced on Wednesday. James had surgery on Tuesday after he suffered the injury during a scrimmage Sunday. It is the second time in five seasons that James has had a season end because of a knee injury. He tore the meniscus in his left knee as a sophomore at Florida State in 2016 during the team's second game and missed the rest of the year. After being an All-Pro selection as a rookie in 2018, James played in only five games last season due to a foot injury.

Rookie defenseman Cale Makar scored the go-ahead goal in the second period, third-string goaltender Michael Hutchinson stopped 27 shots and the Colorado Avalanche beat the Dallas Stars 4-1 on Wednesday night in Edmonton, Alberta, to force a decisive Game 7 in their second-round playoff series. Nikita Zadorov and Mikko Rantanen also scored, and Nathan MacKinnon added an empty-netter for the Avalanche, who staved off elimination for a second consecutive game to tie the series at three wins apiece. Colorado never has won a postseason series when trailing 3-1. Game 7 is Friday. The 30-year-old Hutchinson was back in net with starter Philipp Grubauer and backup Pavel Francouz both sidelined. It was just Hutchinson's second career NHL playoff start -- and second win. Miro Heiskanen scored for the Stars, while Anton Khudobin made 20 saves.

Marcus Morris of the Los Angeles Clippers was fined $35,000 by the NBA on Wednesday for his flagrant foul on Luka Doncic of the Dallas Mavericks, who was penalized $15,000 for throwing the ball at a referee. Both fines stemmed from actions in Game 6 of a first-round playoff series, which the Clippers won to eliminate the Mavericks. Morris swung his arm down hard and hit a driving Doncic in the neck area early in the second quarter. The forward was given a flagrant foul 2, an automatic ejection. The NBA said the amount of the fine for Morris was based in part on the fact he has been disciplined several times in the past for physical altercations on the court. Doncic was called for an offensive foul later in the game and threw the ball into official Bill Kennedy's leg. 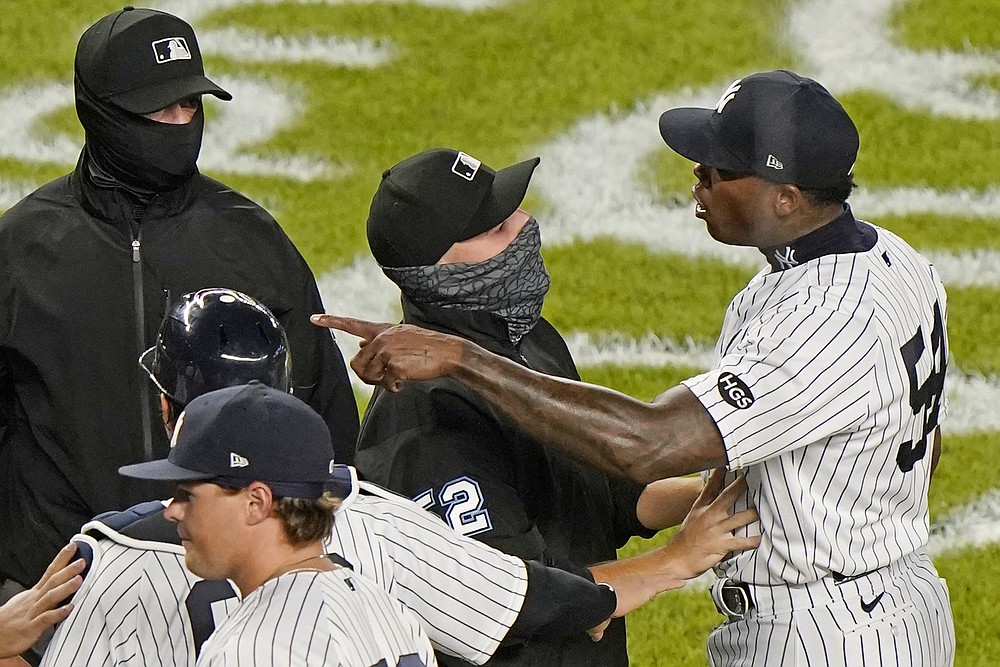