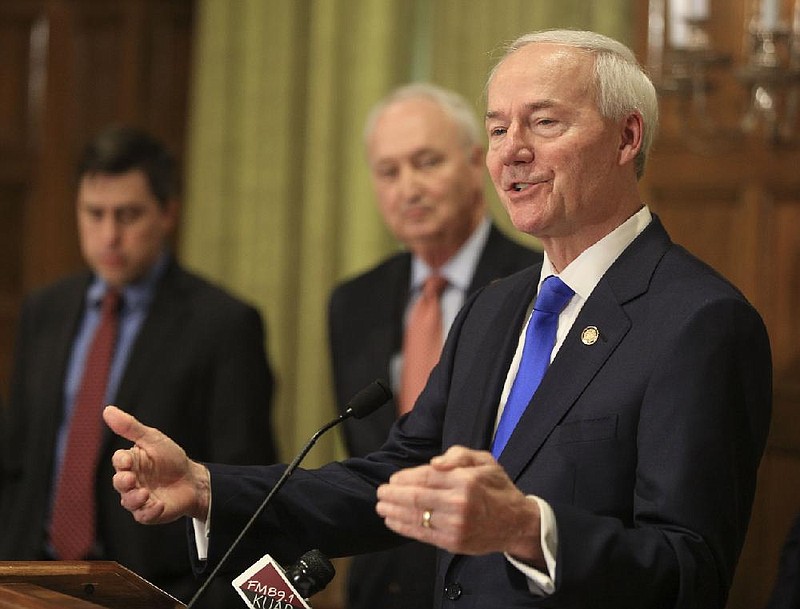 Bolstered by rising individual income tax, and sales and use tax collections, Arkansas' general revenue tax collections in August increased by $56.9 million, or 11.2%, over a year ago to $564.9 million.

Last month's collections exceeded the state's April 2 forecast by $53.9 million, or 10.6 %, the state Department of Finance and Administration said Wednesday in its monthly revenue report.

August's general revenue collections exceeded the previous record for the month of $508 million in 2019, said Whitney McLaughlin, a tax analyst for the finance department.

Gov. Asa Hutchinson said the revenue report shows that people are going back to work and that Arkansas taxpayers remain confident and continue to spend for consumer goods.

"We also know that there are parts of our economy in Arkansas that are really hurting such as many aspects of our tourism industry like lodging, convention centers and small retail businesses," the Republican governor said in a written statement.

Tax refunds and some special government expenditures are cut off the top of total general revenue, leaving a net amount that state agencies are allowed to spend.

These results include net collection increases tied to the state shifting its individual income tax filing and payment deadline from April 15 in fiscal 2020 until July 15 in fiscal 2021, the finance department noted.

Hutchinson said there is no current plan to adjust the state's general revenue forecast for fiscal 2021.

"We will continue to monitor the needs of agencies and departments of state government to assure they can adequately deliver needed services, and if additional funding is needed in a particular area, then we will work with the General Assembly to fill the gap with the reserve funds that have been set aside for such a time," he said in a written statement.

"As to my consistent goal to lower the state individual income tax rate, it is too early to tell whether we can take another step in that direction," Hutchinson said.

"The current budget numbers are very encouraging, and I would hope a portion of the current surplus can be used for income tax reduction, but the next step will be guided by the budget numbers in the coming months," the governor added.

In the fiscal session in April, the Legislature enacted a $5.89 billion general revenue budget for fiscal 2021.

The finance department's April 2 forecast will provide $5.68 billion for the fiscal 2021 budget and leave $212.2 million unfunded. On April 2, the department trimmed its original forecast for fiscal 2021 by nearly $206 million, citing a projected economic recession triggered by the coronavirus pandemic.

According to the finance department, August's general revenue included:

Withholding is the largest category of individual income taxes. They increased by $16 million, or 7.6%, over a year ago to $228 million, and exceeded the state's forecast by $20.3 million.

"That's a combination of a lot of things mixed together, the economy, the tax cuts, a payday timing factor that is positive this month and negative in September and it is a large payday timing affect," said John Shelnutt, the state's chief economic forecaster.

There is one more Thursday and one more Friday payday over the same month a year ago, he said.

"That's partly [federal] stimulus and people going back to work," he said.

"It was sort of a mixed bag in the business-related categories [for sales tax collections]," Shelnutt said. "Construction is still running strong. Rental leasing is strong. Wholesale is up, and restaurants are still down, especially the dine-in, full-service restaurants."

It's a volatile source of tax collections, and "it's a quiet month for that category," Shelnutt said.

"In [fiscal year 2017], we receipted in more than in previous years, therefore there was a subsequent increase in the funds required to be transferred to general revenue," he said in a written statement. "The increase in receipts in FY17 can be attributed to a variety of things including a change in the dormancy periods for certain types of funds as well as increased outreach and education with businesses."

In August, the state's individual income tax refunds increased by $16.1 million or 155.2% over a year ago to $26.4 million, and exceeded the state's forecast by $11.2 million or 73.8%. Refund amounts above the forecast reduce the state's net available general revenue.

The federal government covers 90% of the cost of the program under the federal Patient Protection and Affordable Care Act, and the state pays the remaining 10%.

Asked whether the number of people participating in the Arkansas Works program has peaked yet during the coronavirus pandemic, Department of Human Services spokesman Amy Webb said that "given the ongoing public health emergency, the current limitations around disenrollment, and the potential impacts on the economy, it's likely it has not peaked at this point."

"But it's something we are watching closely," she said in a written statement. 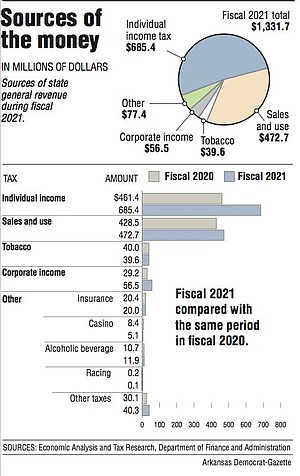