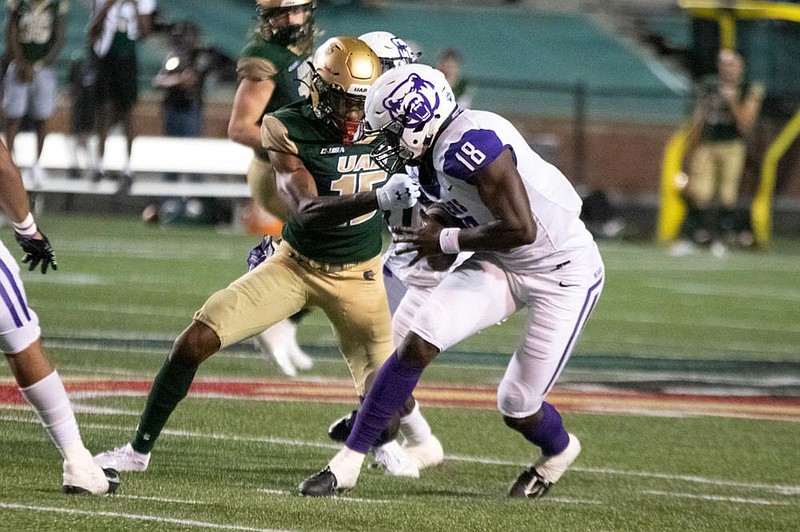 BIRMINGHAM, Ala. – There would be no second-half comeback for the University of Central Arkansas this time around.

Senior tight end Gerrit Prince hauled in both of Johnston’s touchdowns for the Blazers, who piled up 459 yards of offense to help run their home winning streak to 19 games.

The Bears, however, threw a serious scare into the two-time Conference USA West Division champions.

UCA (1-1) scored 21 points off three UAB (1-0) first-half turnovers to trim a 28-7 deficit to 28-21 by halftime. But UAB re-established control in the second half behind touchdown runs from junior running back Lucious Stanley and sophomore tailback Jermaine Brown to open up a cushion the Bears couldn’t recover from.

“We didn’t talk about it much this week, but the cards were stacked against us,” UCA Coach Nathan Brown said. “When you’re having a Saturday to Thursday turnaround, we looked like a tired team out there. I think fatigure took over a little bit, but gosh they fought. I think UAB is probably a top-25 team compared to the teams that are playing right now, minus the Big Ten and Pac-12.

“To lose by 10 and really leave some stuff out. … missed two field goals and had a turnover close to our red zone. It could’ve been a lot different if we’d just made a few plays in some spots.”

Quarterback Breylin Smith, who threw for 283 yards and tossed the game-winning touchdown pass Saturday night against Austin Peay, was held to 193 yards passing for UCA,. The junior did have three touchdown tosses, two to junior wide receiver Lujuan Winningham and one to senior tight end Sam Camargo.

The Bears finished with 293 yards against a stout Blazers’ defense, but they wasted a prime scoring opportunity on the game’s opening drive. UCA moved deep into UAB territory, with senior running back Kierre Crossley providing the big blow with a 34-yard run to the Blazers’ 24-yard line. But the drive stalled and ultimately ended when junior kicker Hayden Ray misfired on a 46-yard field goal attempt.

UAB took advantage of Ray’s miss to jump out to a lead on the following drive. The Blazers drove 73 yards in 12 plays and scored when Johnston found Prince for a 6-yard touchdown on fourth down with 7:03 to go in the first quarter.

Brown pushed UAB’s lead to 14-0 at the 2:46 mark of the quarter with his 5-yard score to cap a 9-play, 55-yard march, but UCA crept back in it by capitalizing off the Blazers’ turnovers.

Junior linebacker Malik Wilson stepped in front of a Johnston pass at the UAB 38-yard line and returned it 34 yards. Two plays later, sophomore running back Cameron Myers rumbled 4 yards for a touchdown to pull UCA within seven.

The Blazers upped their lead to 28-7 with scores on two of their next three possessions. Freshman quarterback Bryson Lucero hit senior wide receiver Myron Mitchell for an 18-yard touchdown with 10:50 remaining in the second quarter before Johnston followed a little over five minutes later with a 10-yarder to Prince.

But UCA, which won’t play again until Sept. 19 against Arkansas State University, stormed back quickly thanks to back-to-back fumble recoveries. After freshman defensive back Nick Nakwaasah pounced on a bobbled punt return by Mitchell, Smith’s 15-yard scoring toss to Winningham at the 2:33 mark cut UAB’s lead to 28-14. A little more than a minute later, senior defensive back Robert Rochelle stripped the ball away from junior wide receiver Trea Shropshire and ran 35 yards for a touchdown as the Bears clawed to within 28-21.

UCA struggled to generate anything for the majority of the second half. The Bears totaled only 5 yards in the third quarter and had a tough time moving the ball early in the fourth until Smith ended a 65-yard scoring drive with an 8-yard touchdown to Winningham with 5:43 left in the game. Smith also delivered a 6-yard touchdown to Camargo with 32 seconds to go to set the final margin.

“That defense was a top-10 defense at the [Football Bowl Subdivision] level last year,” Brown explained. “We knew they were going to be a tall task. We picked and chose our shots, and they played tough.

“All the credit goes to UAB. They were ready to play, and they made more plays than us [Thursday], but we’re going to be fine. That may be the best team we play all year, just talent wise, and I like our odds moving forward.” 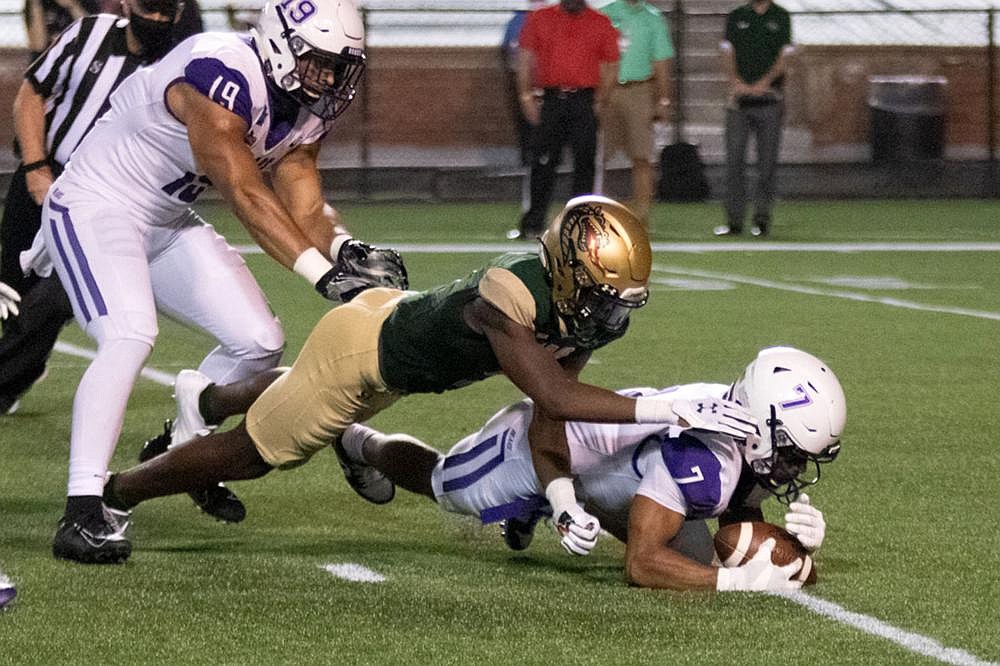 UCA’s Nick Nakwaasah (right) recovers a fumble during the Bears’ 45-35 loss to Alabama-Birmingham on Thursday in Birmingham, Ala. (Photo courtesy University of Central Arkansas)
ADVERTISEMENT