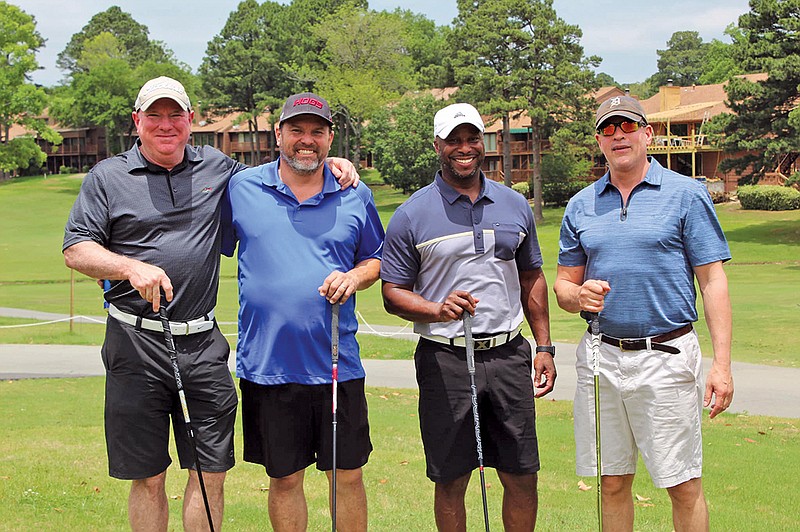 The 20th annual Paul Dunn Classic is scheduled for Sept. 14 at the Maumelle Country Club. Proceeds from the tournament will benefit families in the area who are battling amyotrophic lateral sclerosis, or ALS, through the ALS Association. The Arkansas ALS Chapter assists approximately 150 families across the state. Pictured, from left, are Blake Murchinson, Mike Compton, Rodney Peel and Tarek Shehadeh, who played in last year’s tournament.

Steve Jones has played golf since he was 28 years old, but after he was diagnosed with amyotrophic lateral sclerosis, or ALS, in May of last year, he hasn’t been able to play the game.

“I might be able to make a few putts, but I can’t swing the club anymore,” Jones said. “Golf has been my passion for years, but I have worked at it real hard, and I got pretty good at it.

“This ailment has prevented me from playing, but I know a lot of people in golf, and I was able to bring in some teams and new sponsors for the Paul Dunn tournament.”

The annual Paul Dunn Classic, scheduled for Sept. 14 at the Maumelle Country Club, will celebrate its 20th anniversary this year. Proceeds from the tournament benefit families in the area who are battling ALS through the ALS Association. The Arkansas ALS Chapter assists approximately 150 families across the state.

“It is a great thing. I haven’t been around the association that much, but I can see people helping out,” Jones said. “I know they have been doing this for quite some time.

“What I found out with ALS is they don’t know what causes it, and there is nothing they can do for those who have it.”

The cost for the tournament is $600 per team or $150 per player. There will be afternoon and morning tee times, and the price includes a green fee, a goody bag, lunch and prizes.

Dunn died when he was

Kristi Acri, who was married to Dunn for six years, volunteers for the tournament.

“It is just so nice that after all these years, these people still care and bring awareness to something we don’t have a cure for,” Acri said. “The tournament is very well run by his fraternity brothers. They work closely together, gathering up teams.”

Acri said that Dunn wanted people to understand the disease and get more attention for it.

Kristi’s son, Parker Dunn, was just 5 weeks old when Paul was diagnosed with ALS, but Parker is now a student at Harding University in Searcy. He recently changed his major to communications, which is the same degree his dad earned.

“Parker is not a golfer, but he has volunteered with the tournament,” Acri said. “Until he went to college, his presence was known at the tournament, and he helped with odds and ends.

Acri said she cannot believe the tournament is still going on after all these years.

“I know the organizers have to be exhausted because it is not easy to put on the tournament,” she said. “People know the classic because it is such a well-run event.

“We have a lot of the same people every year.”

Darren Rose, who lives in Mayflower, was diagnosed with ALS in January 2019 and played in the golf tournament last year.

“It provides good public awareness for ALS,” Rose said. “We are trying to get as much awareness as possible.”

Rose has a brace on his leg and is still able to walk. He said he is capable of walking 100 yards or so. He said the progression of his disease is slow compared to a lot of ALS patients.

“I know people who have gotten diagnosed after me and have since passed away,” Rose said. “It affects everybody differently.”

Rose said he can’t swing a club, so last year, he mainly just putted, although he did swing a couple of times.

“I used to play four or five times a week, so it is not fun to suck at it now,” Rose said.

Recently, however, he played at a tournament in Cabot and was introduced to an EZeeGolf club, specifically designed for those who are disabled.

“It is made for handicapped people to play golf,” Rose said. “As long as you can hold the club and push a button, you can use it.

“It wears me out, but I can still do it, so I am looking forward to that. I will be playing this year with it, so I can contribute a little bit more with my team.”

He said he plays with two of his golfing buddies and his son, Zack.

“After my diagnosis, I didn’t think I would play in a golf tournament again, so getting to play is kind of bittersweet,” Rose said.