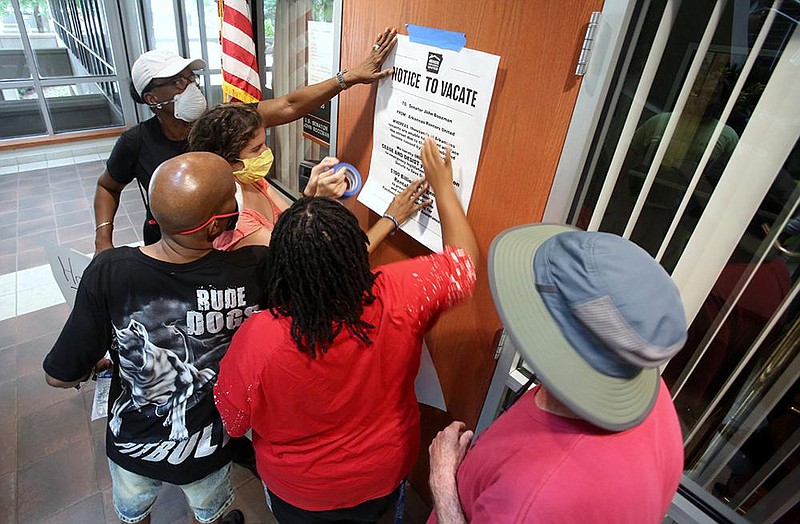 Despite a sweeping federal order last week halting many evictions, Arkansas renters and housing experts still fear that without more assistance, tenants affected by the covid-19 pandemic will build up huge debt over the coming months.

While experts and advocates agree the order banning eviction for nonpayment of rent is a positive development, the federal order does not freeze rent payments or late fees.

The order also says that if stricter protections are in place at the state level, they take precedence.

Arkansas, however, hasn’t enacted any protections beyond the since-expired Supreme Court order that enforced the CARES Act’s eviction ban on some federally backed housing.

The new Centers for Disease Control and Prevention order took effect Friday and runs through Dec. 31. CDC Director Dr. Robert Redfield signed the document because “evictions of tenants could be detrimental to public health control measures to slow the spread of SARS-Cov-2, the virus that causes COVID-19,” according to the CDC website.

The order applies to evictions for nonpayment of rent for tenants who:

Have “used best efforts” to obtain government assistance for rent or housing.

Make less than $99,000 a year, were not required to report 2019 income to the government or received a stimulus check under the CARES Act.

Are unable to pay the full rent or housing payment because of a loss of income, loss of work or wages, or extraordinary out-of-pocket medical expenses.

If evicted would probably be homeless or forced into a congregate-living setting.

Tenants who can’t pay rent must submit a declaration that says they qualify in order to avoid eviction. A sample form is available through the Center for Arkansas Legal Services.

Property owners and others who violate the order can face criminal penalties including a fine of up to $100,000 and/or a year of jail time. Fines are steeper — up to $250,000 — if a tenant dies as a result of an eviction. Organizations that violate the order face higher penalties.

“There are a couple of issues here,” said Lynn Foster, a retired University of Arkansas at Little Rock William H. Bowen School of Law professor who specializes in housing issues. “One issue is the immediate need of tenants for rent assistance. Now the CDC’s moratorium solves part of the problem by kicking the can down the road.”

About a third of Arkansans are renters, according to data from the U.S. Census Bureau.

Foster also pointed out that without rental assistance funds, landlords may not be paid everything they’re owed for several months.

“People will owe thousands,” said Neil Sealy, an organizer with Arkansas Renters United, a grassroots group that promotes the rights of renters across the state.

He cited a couple of examples of late fees piling up, including one apartment complex in Little Rock that charges 10% of the monthly rent plus $5 per day, according to a document obtained by the Arkansas Democrat-Gazette.

Generally, late fees are $5-$15 per day, and that can stack up, particularly for people with low incomes, Sealy said.

A freeze on late fees is one of a few solutions he sees for renters facing eviction since the pandemic began in Arkansas in March.

Sealy’s group protested at the Little Rock offices of Republican Sens. Tom Cotton and John Boozman on Thursday , calling for them to pass $100 billion in federal rental assistance and for continued expanded unemployment benefits.

That $100 billion is included in the Health and Economic Recovery Omnibus Emergency Solutions Act, or HEROES Act. After passing the House, the act has not seen a vote in the Senate.

Patrick Creamer, a spokesman for Boozman, said in an email to the newspaper that the senator was working to “find common ground” on another round of pandemic relief.

“The details of that package are still being negotiated, but he [Boozman] remains hopeful that the Senate will be able to reach agreement on the next phase of relief when the chamber reconvenes” this week, Creamer said.

A Cotton representative did not return a request for comment.

On Wednesday , Gov. Asa Hutchinson urged renters to reach out to local nonprofits for help paying their rent.

“Rather than get behind on your rent, which is still owed, that just puts problems more for you down the road, utilize these community action agencies, these nonprofits, to help you get over a tough time if you’re having a lost income for covid reasons,” Hutchinson said in his near-daily news conference.

In response to a request for comment Friday on whether Hutchinson would support a state fund, a freeze on late fees or other measures to support Arkansas renters, spokeswoman Katie Beck said the state Department of Human Services has already disbursed more than $8 million in Emergency Solutions Grants, $4.8 million of which was allotted for rapid rehousing and homelessness prevention.

She added that the Arkansas Development Finance Authority has disbursed more than $675,000 in Tenant Based Rental Assistance grants and has allocated $3 million more for grants to public housing agencies for pandemic rental assistance.

The governor has in recent months resisted calls to institute a state-level eviction moratorium like those adopted in states such as Arizona and New York. He has also said people should work with their landlords when possible.

Arkansas evictions have risen every month since the pandemic started. July saw 329 unlawful detainer cases filed. In August, there were 371, according to an analysis by the newspaper.

That’s still down from most years, but getting close to numbers in recent years, Foster said.

The numbers, gathered from cases filed online in Arkansas Court Connect, aren’t a complete count. Some jurisdictions don’t post their cases online and the data doesn’t include so-called “self-help evictions,” which are methods landlords use to evict tenants such as shutting off the power or changing the locks.

The CARES Act, which included a ban on eviction for nonpayment of rent for tenants of some federally backed housing, expired in late July. Housing experts predicted a wave of evictions would follow that would be “unprecedented in modern times,” according to the CDC order.

Kendall Lewellan, director of the Center for Arkansas Legal Services, said the number of illegal eviction cases her office saw in August was down from previous months. Over the past few months overall, the nonprofit has received more calls than in past years generally.

“A good portion are because of covid,” Lewellan said in an interview Thursday. “But there’s a broad sense in which all evictions are covid-related.”

She cited the poor economy and a desire to keep people from entering homelessness or congregate-living settings such as shelters in order to prevent exposure to the virus. 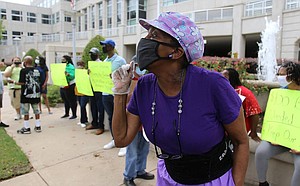 Joy Burton, 39, works two jobs to support herself and her 3-year-old son, who is disabled. Her hours at a clothing store were cut in April as the pandemic began and she’s since had trouble paying her rent.

“I’ve been seeing evictions out there for the last few weeks,” Burton said of her apartment complex in southwest Little Rock.

She’s avoided eviction so far, but is worried about building up debt in the months to come as she looks for more work and safe child care for her son.