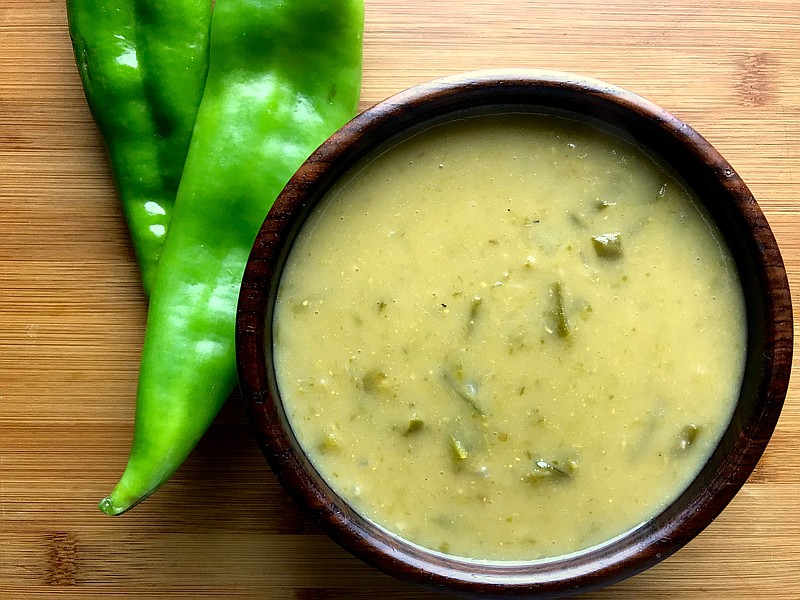 As with most big events this year, New Mexico's Hatch Chile Festival, originally scheduled for Labor Day Weekend, was canceled due to the pandemic.

Hatch chiles, grown in New Mexico's Hatch Valley about 40 miles north of Las Cruces, are renowned for their complex hot and sweet flavor. Their season typically lasts from late summer through early fall.

Hatch chiles are essentially the same variety of chile as Anaheim, New Mexico and California chiles, but what makes Hatch distinct — like Vidalia onions and Champagne wine — is the unique growing conditions in the region. It can only be called a Hatch chile if it was grown in the Hatch Valley of New Mexico where the days are hot and sunny and the nights are cool.

In addition to the annual festival in New Mexico, many grocery stores nationwide have smaller Hatch festivals, where they roast and sell the famous chiles on site. And again, because of the pandemic, many of these roasting events have been canceled.

But not all is lost. The peppers are still available — I've seen them in 1.25-pound bags and 25-pound boxes in Arkansas grocery stores — you just may have to roast them yourself. (If your local supermarket doesn't have Hatch chiles in stock they can be ordered directly from New Mexico and shipped, or simply substitute Anaheim peppers in the following recipe. It won't taste exactly the same, but it'll still be good.)

Traditionally Hatch chiles are roasted in chile roasters — steel drums that rotate over a flame — but a grill, broiler or gas flame on the range will work too. I've even found instructions for "roasting" them in the microwave, which for the record is steaming, but the object is the same: cook the pepper enough to easily remove the skin and bring out the flavor of the flesh.

Broiler method: Heat broiler to high. Line a broiler-safe pan with heavy-duty aluminum foil and arrange peppers in a single layer. Broil peppers for 5 minutes per side, rotating peppers as needed, until uniformly blistered and charred.

Stovetop method: For a single pepper, hold the pepper using flame-proof tongs or a long fork directly over the flame of a gas range, rotating pepper as needed for even charring. For several peppers, place a wire rack (such as the kind used on a small charcoal grill) over one or two burners and turn burners on (you don't want the flames to touch the peppers, but you want it hot) and arrange peppers on the rack. Roast, turning peppers occasionally, until uniformly blistered and charred.

Grill method: Prepare grill for medium-high heat (about 400 degrees). Arrange peppers in a single layer on the grill grate 5 to 6 inches from heat. Grill, turning peppers occasionally until uniformly blistered and charred.

Microwave method: Place peppers in a microwave-safe dish and add a teaspoon or two of water; cover with tight lid. Microwave on 100% power for 7 to 8 minutes. Let stand for 1 to 2 minutes, then carefully remove lid, away from your face as the steam will be hot. (I have not tried this one. It is from hatch-green-chile.com.)

To peel the peppers, wearing gloves (and goggles if your eyes are sensitive) slip the skins off the peppers. Stubborn skins may slip off more easily under running water, or use the blade of a knife to scrape off particularly stubborn bits of skin. Use a vegetable peeler to remove the skin from parts of the pepper where the skin didn't blister.

To freeze, place the whole, unpeeled peppers in a freezer bag or shallow freezer containers, removing as much air as possible and freeze. (I like to use quart-size bags for easy portioning.) Thaw and peel peppers just before use. The frozen peppers will keep for 12 to 18 months.

This recipe is typical for what you'd find in New Mexico. It's important to understand this is not salsa. It is a cooked sauce that's much more like a gravy — it even starts with a roux of sorts. In other parts of the southwest, the sauce might include tomatillos.

Serve it over eggs, enchiladas, add a little pork, beef or chicken to make it a meal, stir it into a batch of cornbread, use it to top a burger, add to cheese dip, whatever your heart and taste buds desire.

Hatch chiles can be hot or mild and are generally labeled as such. I prefer this sauce made using a combination of mild and hot peppers.

¾ teaspoon salt, or to taste (use less if your broth is salty)

Dash ground cumin, or to taste

In a medium sauce pan, melt 1 tablespoon of the butter over medium-low heat. Add the onion and cook, stirring frequently, until softened. Stir in the flour. If there isn't enough fat left in the pan to coat all of the flour add the remaining tablespoon of butter and let it melt, stirring to coat the flour. Once all of the flour is coated with the butter, pour in the broth, then add the peppers, garlic, salt and cumin. Simmer, stirring frequently, for 15 to 20 minutes. If a smoother sauce is desired, puree in a blender or using an immersion blender to create desired texture.