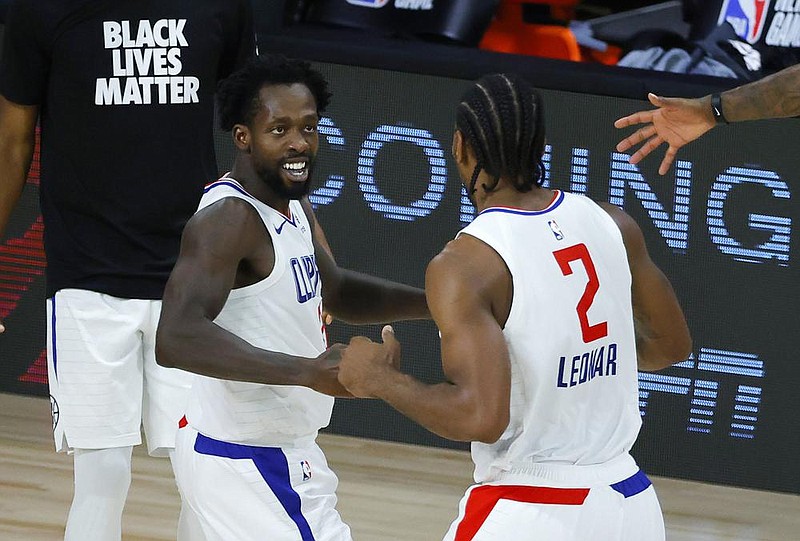 Former Arkansas Razorback Patrick Beverley (left) celebrates with teammate Kawhi Leonard after the Los Angeles Clippers beat the New Orleans Pelicans in an NBA game last month. Earlier this season, Leonard had high praise for Beverley. “Pat’s energy, his will to want to win every game, his toughness — I mean, I’ll take that every day,” Leonard said. (AP/Kevin C. Cox)

FAYETTEVILLE -- Patrick Beverley took the long route from the University of Arkansas to the NBA.

Through the Ukraine, Greece and Russia.

Beverley, a 6-1 guard from Chicago, played overseas for three seasons before finally getting his shot in the NBA with the Houston Rockets during the 2012-13 season.

Seven seasons later, Beverley is still in the NBA as a starter for the Los Angeles Clippers, who are playing in the Western Conference semifinals against the Denver Nuggets.

Beverley, who has built his game around playing tenacious defense, is No. 8 on the Arkansas Democrat-Gazette's list of top NBA Razorbacks.

On Tuesday, it was announced Beverley, 32, had been named to the NBA all-defensive team -- which is voted on by media members -- for the third time.

"Pat thinks he could beat Mike Tyson in his prime in a fight," Clippers Coach Doc Rivers told reporters earlier this season. "Which is stupid, but he believes that. And I think that rubs off on all our guys."

Beverley was a first-team all-defensive team member in 2016, and a second-team pick in 2014 and this season.

"Pat can guard anyone in this league," Clippers 7-foot center Ivica Zubac said.

Beverley often has taken on the challenge of guarding bigger players, even 6-9 LeBron James and 6-10 Kevin Durant.

Matchups between Beverley and 6-3 Russell Westbrook -- who like James and Durant has been an MVP -- have gotten especially testy at times.

Rockets 6-5 guard James Harden, also an MVP, praised Beverley even after scoring 47 points on his former Houston teammate this season.

"We all know what Pat does," Harden said. "He's great at trying to get in your head and being aggressive, so I didn't try to focus on that. But we all know how great Pat is. If you let him get into your head and to the body, he can be a pest."

Rockets Coach Mike D'Antoni said Beverley "can tick you off," but added that he deserves respect.

"He's earned every cent they give him, and I love him," D'Antoni said. "He plays hard."

Beverley, who signed a three-year, $40 million contract with the Clippers in July, described his defensive philosophy in an interview with Sports Illustrated in 2014.

Forward Chander Parsons, who was Beverley's teammate in Houston at the time, told Sports Illustrated that Beverley is "obnoxious," but added, "It's why we love him so much."

Arkansas assistant coach Clay Moser was an assistant for the Los Angeles Lakers from 2011-19 with responsibilities that included scouting and game-planning for opponents.

"Patrick's a great defender -- and I mean this with all due respect to him and as a positive -- and you could put him in the agitator category," Moser said. "He's a guy that agitates more talented, higher-profile players. His role is to take the toughest defensive assignments, and a lot of times those guys are going to be stars, if not superstars. He's not afraid of anyone.

"So part of the game plan we had was you had to keep your composure when you were playing against Patrick. You couldn't let him get under your skin, even though that seemingly was his whole purpose in life."

Moser said he would warn the Lakers about not becoming too frustrated by Beverley.

"You had to make sure you weren't getting ejected or getting technical fouls or letting him kind of crawl into your mind and get you off your game," Moser said. "It's not a usual thing to have to cover in a game plan or personnel scouting report. But with Patrick, you had to be aware of that, because on certain nights the mind games that he's able to play, and the mental fortitude he brings into a competition, is really, really unique."

With the loss of six seniors, Beverley was going to be Arkansas' unquestioned team leader as a junior, but shortly before the fall semester started the UA announced he would be ineligible.

Arkansas officials didn't specify why Beverley had to miss the season, but an academic issue later was reported as the reason. He had turned in a paper for a class that was written by someone else.

Rather than sit out the 2008-09 season, Beverley turned professional and signed with Dnipro in the Ukraine.

When the Heat released Beverley before the 2009-10 season, he signed with Olympiacos Piraeus in Greece. He then played for Spartak in St. Petersburg, Russia, for the 2011-12 season.

While Beverley was playing overseas, current University of Arkansas Coach Eric Musselman and Moser were coaching Reno in the NBA Developmental League.

"Coach Musselman and I tried everything we could to get Patrick to come play for us in Reno," Moser said. "We just couldn't get him, because when he went overseas he made good money right away. But we loved his game."

Beverley, who won the EuroCup MVP as the league's top player during the 2011-12 season, returned to Spartak the next season, but then signed a free agent agreement with the Rockets on Dec. 23, 2012, as an early Christmas present.

After Beverley spent a week playing in the D-League with the Rio Grande Valley Vipers to get acclimated to Houston's system, he was added to the Rockets' roster and played 41 games during the 2012-13 season. He averaged 5.6 points, 2.7 rebounds and 2.9 assists in 17.4 minutes.

The next season, Beverley became a starter for Houston and averaged 10.2 points, 3.5 rebounds and 2.7 assists in 31.3 minutes.

"Patrick is a guy that made the NBA on his toughness, his heart and his desire to be there," said Darrell Walker, an All-American guard for the Razorbacks and longtime NBA player and coach. "He had to work really hard to get to the NBA. Everything that Patrick Beverley has, he's earned it."

Walker is now coach of the University of Arkansas at Little Rock.

"Every coach would love to have a Patrick Beverley on their team," Walker said. "He's tough, he's hard-nosed, he's not worried about scoring or taking a lot of shots. He's just one of those glue guys that every team needs."

Beverley, who signed a four-year, $23 million contract with the Rockets in July 2015, was traded to the Clippers on June 28, 2017, along with Sam Dekker, Montrezl Harrell, Darrun Hilliard, DeAndre Liggins, Lou Williams, Kyle Wiltjer and a 2018 first-round pick from Houston for Chris Paul.

"Pat was definitely one of the asks, for sure," Rivers said earlier this season when asked to reflect on the trade. "With Pat, we knew what we were getting as far as his toughness."

Shortly after the trade, Rivers praised Beverley not only for his toughness and work ethic but also for being a student of the game.

"I've been most impressed with the IQ part of it, his knowledge," Rivers said. "He does homework. He studies the league."

Beverley talked to the media about the trade before the 2017-18 season.

"I think the one thing that gets overlooked with Patrick is he's always shot it better from three than what people would think," Moser said. "He's been a factor from three-point range mostly because he only takes good ones."

Beverley also has continued to be a strong rebounder in the NBA as he was at Arkansas.

"He's one of the great loose-ball getters in the NBA," Moser said. "And in my mind, loose-ball getting is a very coveted skill, because a lot of games just come down to loose balls."

If the Clippers make it to the NBA Finals this season for the first time and have a shot to win the championship, Beverley likely will have played a key role.

"Pat's energy, his will to want to win every game, his toughness -- I mean, I'll take that every day," Clippers All-Star forward Kawhi Leonard said earlier this season.

Beverley's first season with the Clippers was cut short after 11 games when he suffered a season-ending knee injury, but he has proven his worth to the team many times over since then, despite drawing the ire of the NBA at times.

The NBA announced Monday that Beverley was being fined $25,000 for verbally abusing a game official in Denver's 110-101 victory Saturday. Beverley drew two technical fouls for arguing and was ejected with 1:04 left in the game.

According to Yahoo! Sports, it was Beverley's third fine this season for a total of $55,000. He also was fined $25,000 in October for throwing the ball into the stands, and was fined $5,000 in November for flopping.

"People get lost in some of Pat's antics and stuff," Rivers said. "But his spirit and his soul is so important for our team." 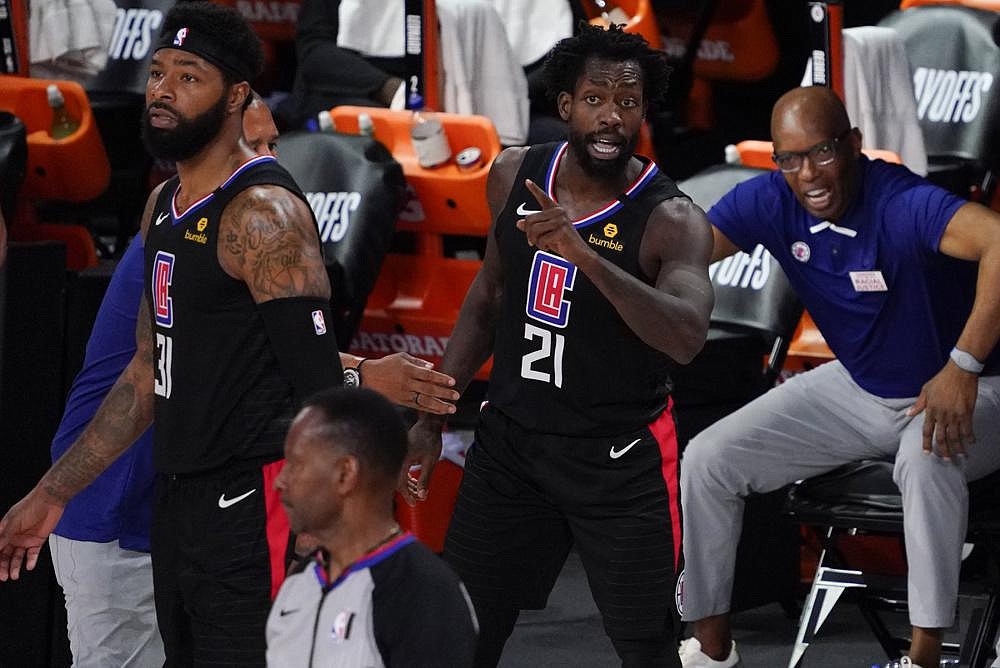 Third in a series on top NBA Razorbacks.

NOTE Beverley played in Greece in the 2009-2010 season, then played in Russia in