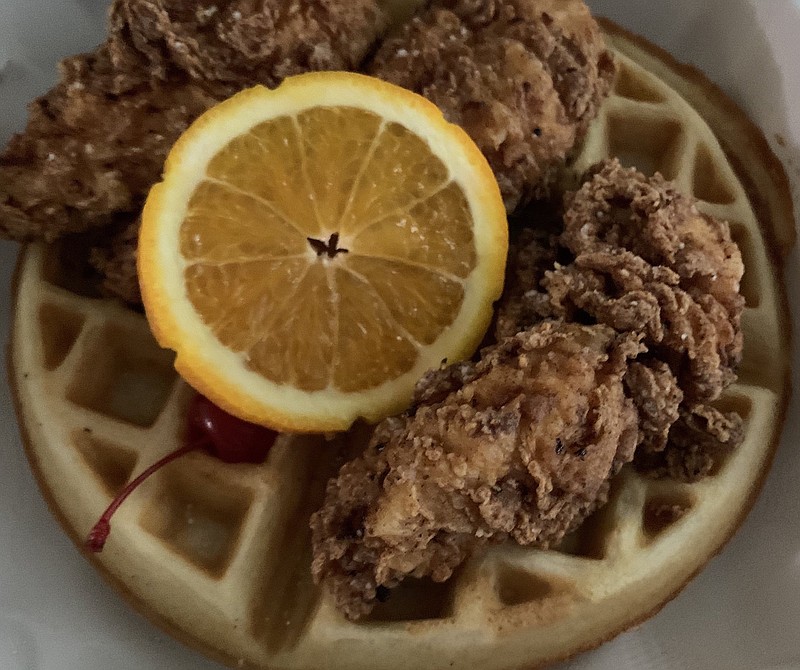 The chicken and waffles for brunch at 42 bar and table comes with maple syrup and some house-made hot sauce. (Arkansas Democrat-Gazette/Eric E. Harrison)

This week, we made "first day of reissue" stops at two restaurants that have reopened after long pandemic-connected gaps and one at a brand-new place with an "old" name.

We also hit up a "branch" eatery at a downtown bank building and continued to make our cautious way around some of the area's food trucks.

As always, we've tried to stay within a hot-food-stays-hot radius and pay for our meals beforehand.

We don't normally hit up places on the day, or even the first weekend, that they open, or reopen, but the anticipation on these three was too powerful to resist: 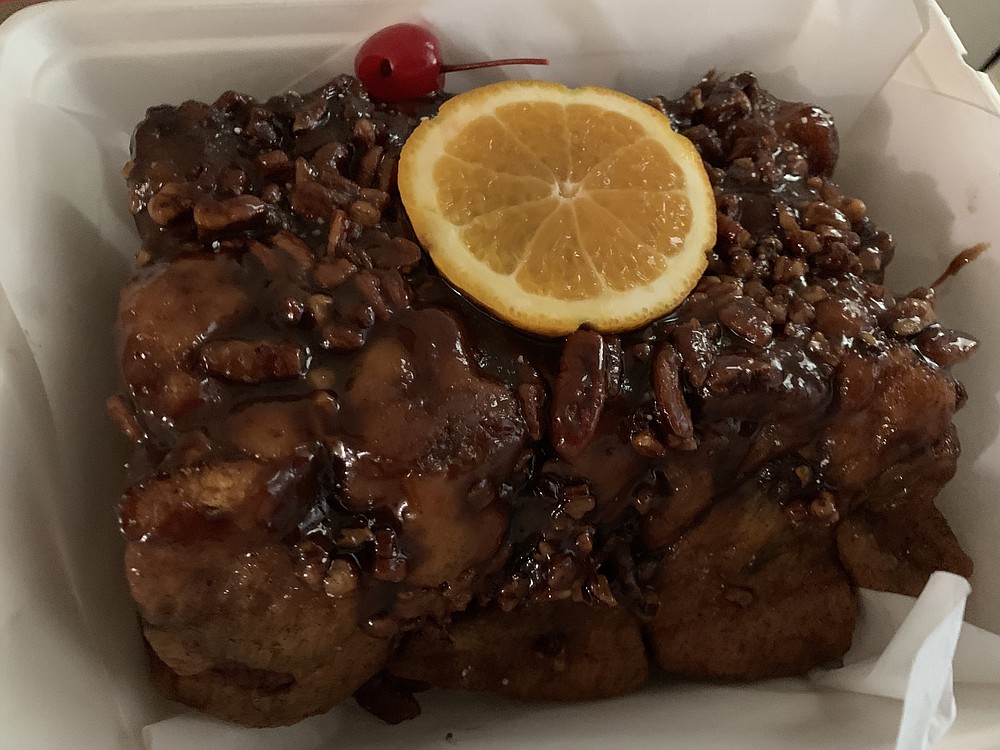 WHAT WE GOT: Fried Chicken & Waffles ($12), Pull Apart Monkey Bread ($8). We decided to celebrate the reopening of the Clinton center's restaurant, which had been closed since March, by getting Sunday brunch to go. We reveled in the Fried Chicken and Waffles ($12), three chunks of chicken breast crisp-fried in a buttermilk batter, resting on a standard-size, soft round waffle, with a side cup of maple syrup and a smaller cup of the house hot sauce, which, used sparingly, gave things a nice vibrant additional taste dimension. The real prize was the monkey bread, rich and richer with a top layer of Arkansas pecans, brown sugar and cinnamon. The loaf was huge — gorilla-size rather than marmoset-size, we'd say if we were being flippant — and we ate of it until we hurt ourselves.

HOW IT WENT: The restaurant at present only does curbside and third-party delivery. We placed and paid for our order by phone and it was ready in the 20 minutes it was promised; a masked-and-gloved manager brought the brown-bagged order to our passenger window on a tray. The "entree" came in a thin-plastic clamshell that might be compostable; the monkey bread came in a cardboard box that is certainly so. Everything was closed with adhesive seals as if to guarantee that once it left the kitchen, it was undisturbed by humans.

HOW IT'S GOING: It being the reopening weekend, it would be hard to gauge, but there were other vehicles in the traffic circle outside the building. 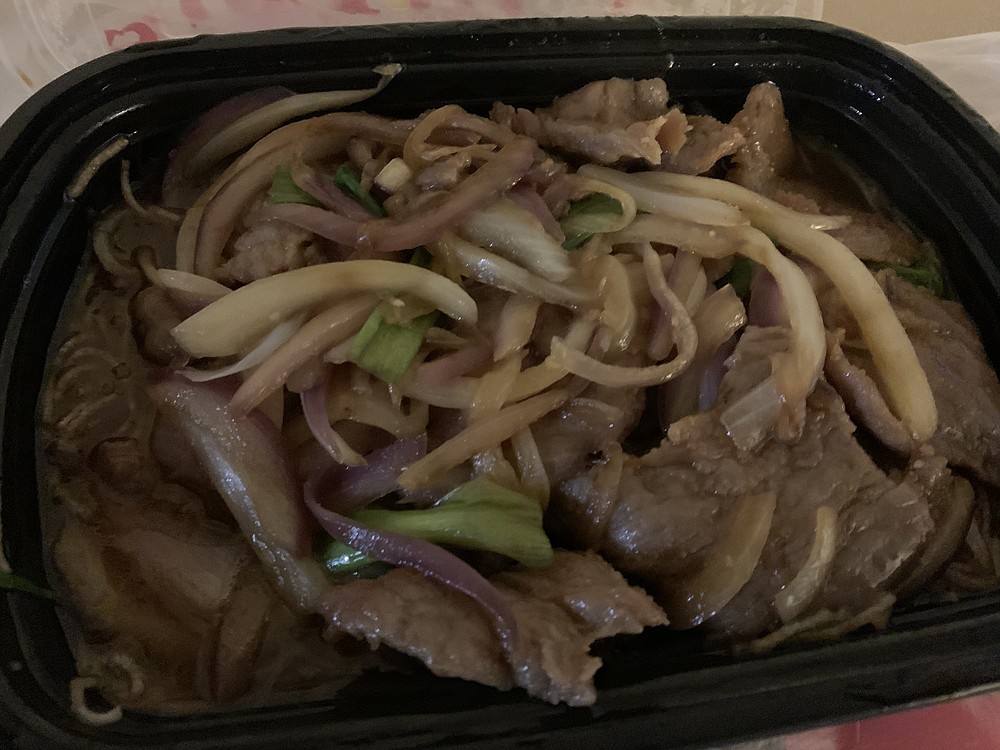 WHAT WE GOT: Hot and sour soup (cup, $3); Mongolian Beef ($14). A.W. Lin's downtown operation, after it took more than two years to arrive, finally opened in mid-February — just in time for the pandemic. Its opulent interior has been idle since, but it reopened at last Sept. 1. We had an errand nearby so we ended up there for a to-go dinner that very night. We opened with a very creditable and decent-size cup of hot and sour soup, so named because its primary ingredients, in basically an egg-drop base, are red pepper flakes; frequently white pepper, depending on the recipe; and vinegar. Their Mongolian Beef, pieces of flank steak stir-fried with onions and scallions in a combination of hoisin and sweet soy sauces, which is is sweeter than most, but not to an extreme; though we've had tenderer beef, this wasn't too tough. And there was a pretty good beef-to-onion balance — roughly 50-50. (One way you know a place is cutting corners is if there's a lot more onions than beef.)

HOW IT WENT: The restaurant is open for dine-in service; we parked, entered and placed and paid for our order in person at the bar. It took about 10 minutes to prepare.

HOW IT'S GOING: There was one other to-go customer at the bar while her sushi order waited on her. 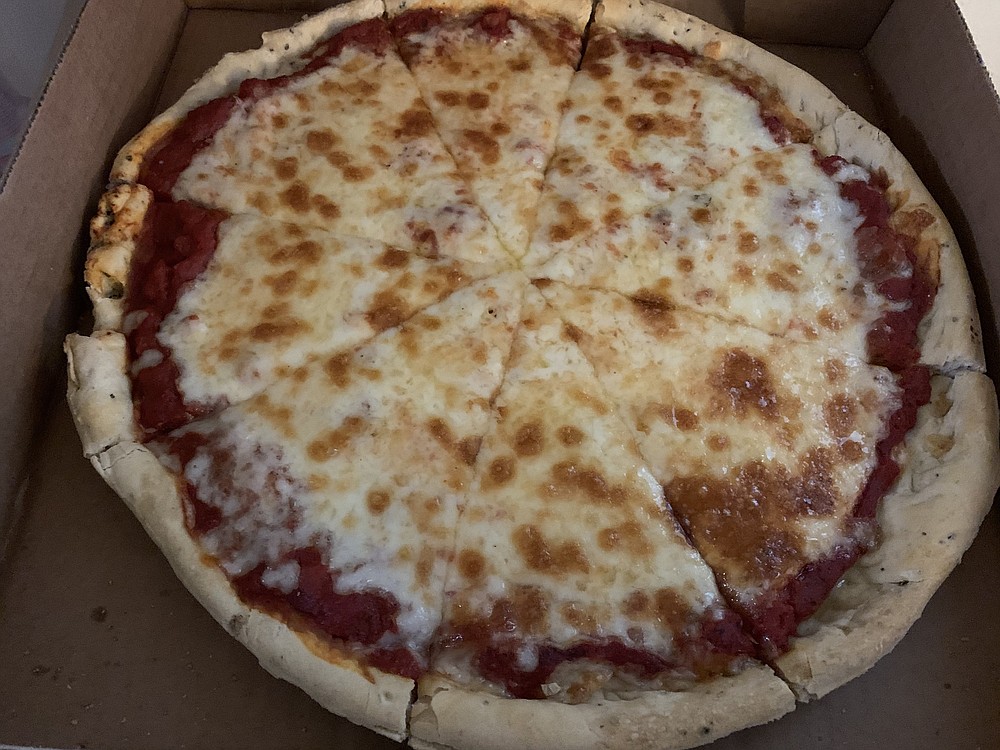 WHAT WE GOT: 13-inch Big Cheese pizza on traditional crust ($16.99). We sort of miss the "original" Gusano's in the River Market after it went belly-up early last year, but the Rogers-based mini-chain it engendered has been going strong and has opened this new branch in the west Little Rock space previously occupied by its partner restaurant, Grub's Bar & Grille (and before that the one-time west Little Rock location of Chili's). The menu is pretty much the same; we returned to the staple we used to order downtown, the Big Cheese, which is basically an extra-cheese pizza. It was pretty much as we remembered and enjoyed it, a lot of cheese and a lot of red sauce on their medium-thick traditional crust. (Deep-dish pies are what make them Chicago-style. But that was a lot more pizza than we were planning for this time around.)

HOW IT WENT: We ordered by phone; right now they're only open for curbside pickup, which is done through a side door. It being their first day of operation, a little fumbling with the point-of-sale system was natural, and therefore it didn't bother us. Our pizza was ready when we arrived, 25 minutes after we ordered, brought to us by a gloved-and-masked server, whom we paid for it.

HOW IT'S GOING: There were at least a half-dozen vehicles awaiting pizzas when we arrived. Some left and others arrived in the couple of minutes we waited. 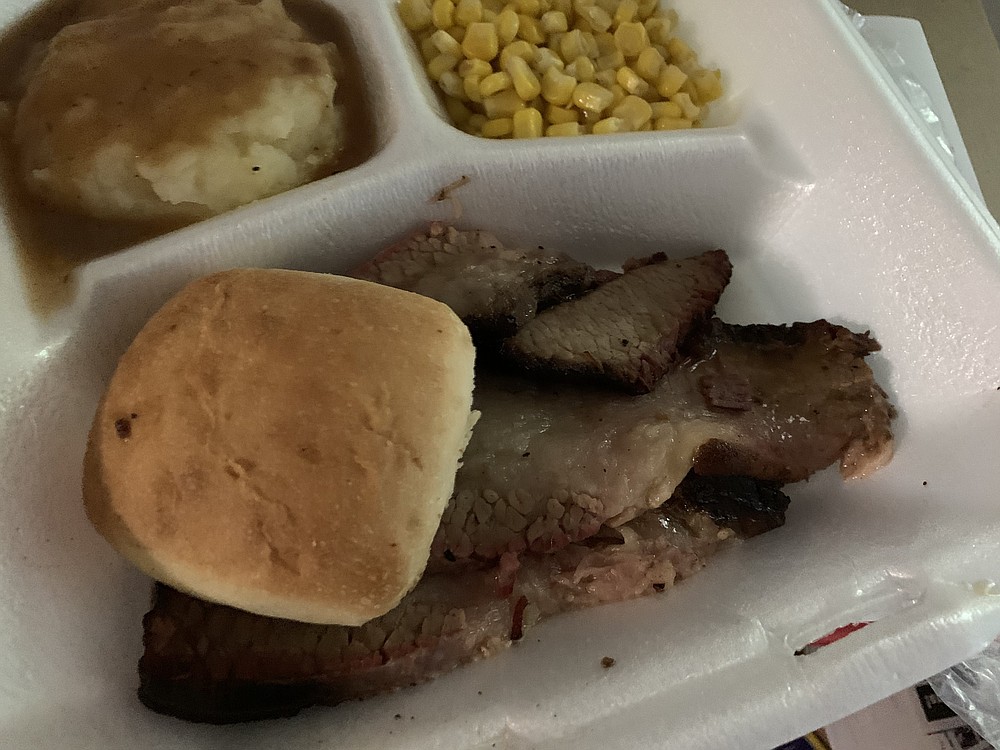 The smoked brisket from Flint's at the Regions tasted good but was about 1/3 fat. Sides for the lunch combo: corn and pinto beans. (Arkansas Democrat-Gazette/Eric E. Harrison)

WHAT WE GOT: Brisket lunch combo ($14.99). Flint Flenoy, also of Flint's Just Like Mom's, recently opened this short-order operation in the former Sack-It Grill portion of the Franke's Cafeteria space on the ground floor of the Regions Bank Building. He does the same sort of meat-and-two-sides plate lunches ($9.99) here, and the menu covers the same kinds of burgers, sandwiches and breakfast items, but he also does small pizzas and pasta and mac & cheese bowls out of this kitchen. He has a smoker, so you also see pulled pork and ribs on the menu, and recently he has been offering brisket (at a somewhat elevated price, $14.99, because beef is currently expensive). We tried it the other day after the well-dressed gentleman out front who guides customers gave it a good tout. We can't fault the flavor, which was excellent, and it was wonderfully tender, but it was also about 1/3 fat. Alas. We got it with sides of kernel corn and mashed potatoes, both of which were fine.

HOW IT WENT: We placed our order over the counter, waited a bit for the kitchen to compile it, and paid on the way out. Less than five minutes, all in all.

HOW IT'S GOING: The place, which is also open for dine-in service, was fairly busy on a recent lunch outing. 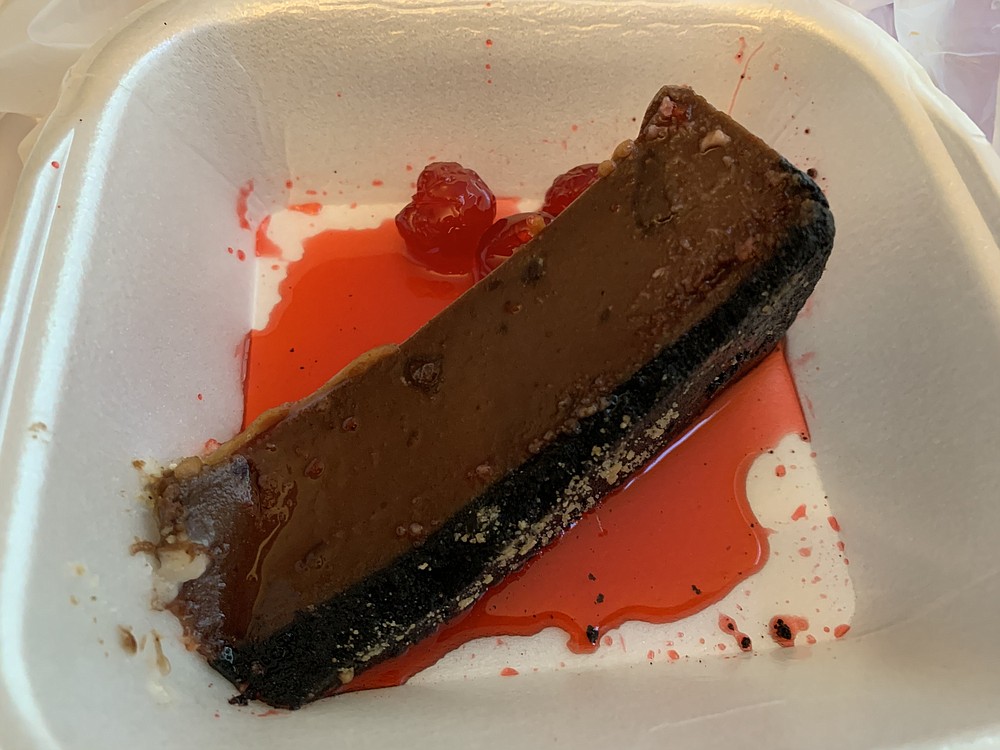 WHAT WE GOT: Seafood pasta ($14); chocolate cheesecake ($5). Seafood pasta from a food truck seems like a bit of a risk, but this turned out to be one well worth taking: mussels, calamari rings and a few plump, firm shrimp sautéed in white wine and tossed with spaghetti in a moderately spicy red sauce. It wasn't a huge portion but it was enough to satisfy, and it demonstrates that food-truck cuisine is reaching new heights. We let the guy at the window up-sell us on a piece of their cheesecake, and it was a hit: a large wedge with a creamy consistency, full chocolate flavor, not too sweet, on a chocolate cookie crust, garnished with maraschino liquor and a couple of maraschino cherries.

HOW IT WENT: Southern Standard posts its ever-changing menu and schedule on its Facebook page. We pulled into the former gas station on North Little Rock's Park Hill and ordered and paid there. Our order took about eight minutes to come out.

HOW IT'S GOING: There was one other customer behind us at the food truck; other customers were checking out the indoor produce and product section of the Filling Station.