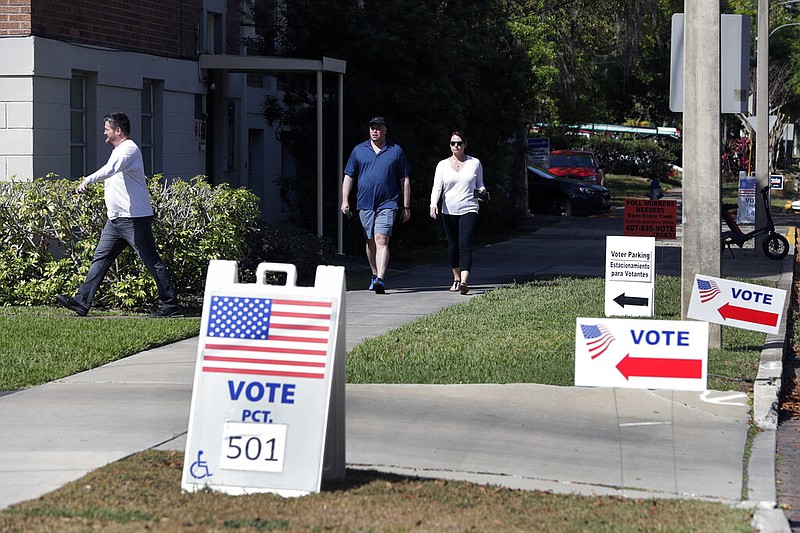 Voters head to a polling station to vote in Florida's primary election in Orlando in this March 17, 2020, file photo. A federal appellate court ruled Friday, Sept. 11, 2020, that Florida felons must pay all fines, restitution and legal fees before they can regain their right to vote, reversing a lower court judge's decision.

ST. PETERSBURG, Fla. — Florida felons must pay all fines, restitution and legal fees before they can regain their right to vote, a federal appellate court ruled Friday.

The order from the 11th U.S. Circuit Court of Appeals upheld the position of Republican Gov. Ron DeSantis and the GOP-led state Legislature. It reversed a lower court judge’s decision that gave Florida felons the right to vote if they had completed their prison sentences, regardless of outstanding legal financial obligations.

Under Amendment 4, which Florida voters passed overwhelmingly in 2018, felons who have completed their sentences would have their voting rights restored. But the legal dispute arose after lawmakers the next year moved to define what it means to complete a sentence.

In addition to prison time served, lawmakers directed that all legal financial obligations, including unpaid fines and restitution, would also have to be settled before a felon could be eligible to vote.

The appeals court agreed with the Republican lawmakers, a decision that voting rights advocates called an affirmation of a “pay-to-vote” system that primarily disenfranchises members of minority groups and poor people.

“This ruling runs counter to the foundational principle that Americans do not have to pay to vote,” said Julie Ebenstein, senior staff attorney with the American Civil Liberties Union’s Voting Rights Project. “The gravity of this decision cannot be overstated. It is an affront to the spirit of democracy.”

In a 200-page ruling on a 6-4 vote, the full 11th Circuit said the Constitution’s due process clause was not violated by the passage of the law implementing Amendment 4.

“States are constitutionally entitled to set legitimate voter qualifications through laws of general application and to require voters to comply with those laws through their own efforts,” Chief U.S. Circuit Judge William Pryor wrote in the majority opinion. “So long as a state provides adequate procedures to challenge individual determinations of ineligibility — as Florida does — due process requires nothing more.”

Four judges issued a dissenting opinion. They argued in part that it is sometimes extremely difficult for returning felons to know what outstanding financial obligations they may still have and that the state should create a mechanism to provide that information.

“In light of the chaos created by the majority’s holding that [legal financial obligations] must be satisfied according to the ‘every-dollar’ method, countless scores of individuals will be uncertain of their eligibility to vote,” wrote U.S. Circuit Judge Beverly Martin in the dissent.

“With its constitution amended in this way, Florida gained an obligation to establish procedures sufficient to determine the eligibility of returning citizens to vote, and to notify them of their eligibility in a prompt and reliable manner,” the dissenters added.

But Pryor wrote that it’s not the state’s responsibility to create a system to let felons know what they owe.

“The Due Process Clause does not require States to provide individual process to help citizens learn the facts necessary to comply with laws of general application,” he wrote.

DeSantis spokesman Fred Piccolo said in an email that the court’s decision affirms that “all terms of a sentence means all terms.”

“There are multiple avenues to restore rights, pay off debts, and seek financial forgiveness from one’s victims,” Piccolo added. “Second chances and the rule of law are not mutually exclusive.”

The amendment permanently bars convicted murderers and rapists from voting, regardless of financial debts. Still, other felons in Florida who have completed prison sentences and would otherwise be eligible but have not paid fines and other legal obligations — estimated in March to number about 774,000 — represent a significant bloc of voters, should they be allowed to cast ballots. Some of them may have settled their debts since that initial March estimate.

The state does not track how many felons have registered to vote since Amendment 4 passed, but its backers estimate that the monetary requirement and the coronavurs pandemic have limited the number to 100,000, far less than those potentially eligible.

The Florida Rights Restoration Coalition has raised more than $4 million to help pay court costs. Donations have come from retired basketball star Michael Jordan as well as More Than a Vote, an organization dedicated to maximizing Black turnout that counts basketball star LeBron James and comedian Kevin Hart among its backers. Still, the total owed could be as high as $3 billion.

The ruling could influence the election outcome in November. Florida is considered a must-win state in President Donald’s Trump’s bid for reelection and is famed for its razor-thin statewide election results. Democrats had hopes of gaining support from thousands of former felons in Florida.

Paul Smith, vice president at the Campaign Legal Center which is pushing for full voting rights for most felons, slammed the ruling.

“This is a deeply disappointing decision,” Smith said. “While the full rights restoration envisioned by Amendment 4 has become less likely to be realized this fall, we will continue this fight for all Florida voters, so the full benefits of Amendment 4 will someday be realized.”

U.S. Rep. Val Demings, a Democrat from Orlando who was considered as a vice presidential nominee by Democratic presidential candidate Joe Biden, said she is introducing a bill in Congress to prohibit states from denying voting rights to American citizens, regardless of prior criminal convictions.

“A criminal conviction does not erase a person from our communities or our country,” said Demings, who is Black and a former Orlando police chief.